I Love You More Cartoon 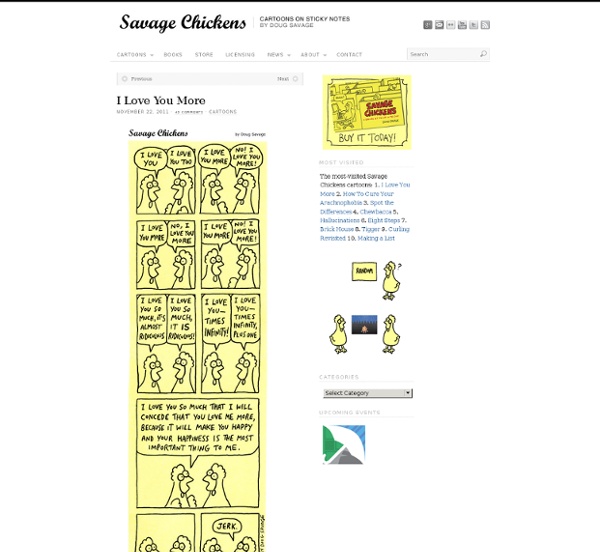 Glass door with a surprise Posted on November 23, 2010 in Bizarre Rate this Post (1 votes, average: 4.00 out of 5) Loading ... So... What do you think? Check this out on our Partner Network Dancing at a party Moms and their babies. Amanda Bynes and her Publicist SCORE 196 Trololololo... SCORE 217 Day 46. Typewriter art by Keira Rathbone. Santa knows me. "You like stuff" SCORE 255 And now you know... Older Sibling Win! Why Slutwalk? - StumbleUpon a href=” posted on BroadSnark By: Mel One morning, when I was in eighth grade, I got dressed for school and went outside to wait for my father to drive me. I was wearing a long knit skirt, sweater, and some boots. You have to understand that, when I was a kid, my father and I were as close as two people could be. There was nothing slutty about what I was wearing (if you believe in that sort of thing). One of my friends at the time had the misfortune of having huge boobs. It really didn’t matter if my friend found that perfectly chaste t-shirt. The idea that girls and women are in some way responsible for other people’s action, for the sometimes truly awful things that people want to do to them, is pervasive. My teen-aged reaction to this bullshit (and a whole lot of other bullshit) was a big, punk rock Fuck You. So I did. “You know, I think we’re beating around the bush here,” the officer said, according to Hoffman. Or maybe not.

99 Excellent Examples of Forced Perspective Photography | Photography Forced perspective is a technique that employs optical illusion to make an object appear farther away, closer, larger or smaller than it actually is. It is used primarily in photography, filmmaking and architecture. It manipulates human visual perception through the use of scaled objects and the correlation between them and the vantage point of the spectator or camera. There are many ways to attack photography and some are much more expensive than others. Here in this showcase, we presenting a Stunning collection of Forced Perspective Photography and Pictures taken by various artists in which all pictures are linked to the author’s pages. You may want to explore further works of the photographers we’ve featured below. When it comes to inspiration then there is no limitation on resources. You may be interested in the following related articles as well. Feel free to join us and you are always welcome to share your thoughts that our readers may find helpful. Further Resources!

The 6 Creepiest Places on Earth It doesn't matter whether or not you believe in ghosts, there are some places in which none of us would want to spend a night. These places have well earned their reputations as being so creepy, tragic or mysterious (or all three) that they definitely qualify as "haunted." Places like... Aokigahara is a woodland at the base of Mount Fuji in Japan that makes The Blair Witch Project forest look like Winnie the Pooh's Hundred Acre Wood. It probably has something to do with all the dead bodies scattered around. What Niagara Falls is to weddings, Aokigahara is to suicide. More than 500 fucking people have taken their own lives in Aokigahara since the 1950s. The trend has supposedly started after Seicho Matsumoto published his novel Kuroi Kaiju (Black Sea of Trees) where two of his characters commit suicide there. Also skulls. Besides bodies and homemade nooses, the area is littered with signs displaying such uplifting messages like "Life is a precious thing! Winchester Mystery House Oh, bitch...!

- StumbleUpon You may have heard about two bills currently being debated in Congress: the misleadingly named Stop Online Piracy Act (or SOPA for short) and Protect IP Act (PIPA). We’re encouraged by the White House’s recent statement refusing to support parts of this legislation that inhibit innovation and take too broad strokes against website owners, but the legislation has not yet been reversed. To spread the word, we’re including this blog post and a collection of content about SOPA and PIPA in every Stumbler’s stream and encouraging Internet users like you to contact their Members of Congress and tell them to not support these bills. SOPA, which is currently being considered in the House, purports to protect “prosperity, creativity, entrepreneurship, and innovation by combating the theft of U.S. property.” But this bill, along with the Senate version called PIPA that’s being put up for a vote on January 24, would likely destroy much creativity fostered by the Internet.

Welcome | Virgin Galactic RGB Murals Use Colored Light Filters To Create Beautiful Optical Illusions Carnovsky is a creative duo comprised of two Milan based artists, Francesco Rugi and Silvia Quintanilla. Their latest project RGB looks at image creation through a new lens. Each of the RGB images are made up of three layers represented by primary colors. This starting image is discombobulating and difficult to read. This installation totally reminds us of those graphics on the back of cereal boxes of yesteryear. Blow your mind?

How To Make Rage Faces on Facebook Chat Simply type the above code that corresponds to the appropriate rage face into Facebook chat, and the image of the rage face you chose will appear, emoticon-like in its existence. Facebook didn’t suddenly become hip to the Internet and add rage face emoticons (something from which Google Chat would greatly benefit), but the ability to add rage faces to Facebook chat is more of a hack than anything else, and something to which you can add. Reddit user daychilde explains that these aren’t actually some form of ragemoticon, but that the double bracket and code corresponds to a user profile or page, and when put into Facebook chat, will show the thumbnail of the profile or page that the code links to. So, all one has to do to make any picture a Facebook chat emoticon, is to simply create a user profile or page that uses the desired picture as the profile picture, then enter the double brackets and corresponding code into Facebook chat. Here’s a tidy list of some more rage face codes: