What Exactly Is A Smart City? 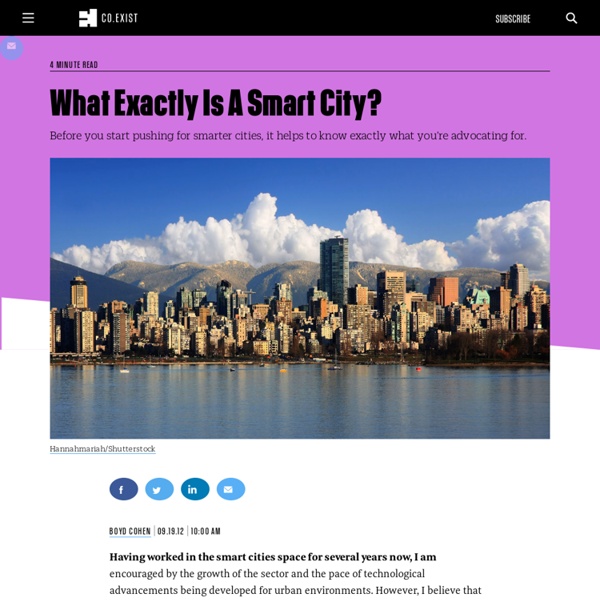 Having worked in the smart cities space for several years now, I am encouraged by the growth of the sector and the pace of technological advancements being developed for urban environments. However, I believe that the smart-cities movement is being held back by a lack of clarity and consensus around what a smart city is and what the components of a smart city actually are. While some people continue to take a narrow view of smart cities by seeing them as places that make better use of information and communication technology (ICT), the cities I work with (and most of the participants in the #smartchat, a monthly Twitterchat about smart cities held on the first Wednesday of each month) all view smart cities as a broad, integrated approach to improving the efficiency of city operations, the quality of life for its citizens, and growing the local economy. Later this year, I’ll publish my annual rankings of smart cities here on Co.Exist. Step 1: Create a Vision with Citizen Engagement

Elevate Your Thinking: Light, air and connectivity beyond the street As we increasingly urbanize, relearning the craft of creating human-scaled places, I often — too often — hear that “if we just get the ground floor right” then all will be fine. While obviously a good start, and one that addresses the most immediate of pedestrian interests, I find that this line of thinking ultimately allows, even incentivizes, buildings poorly designed above the first floor, thereby marginalizing the complete urban experience. The crescendo of urbanism? Nope, there is more to it! Vancouver-maven and UCLA PhD candidate, Neal LaMontagne, has consistently critiqued the full-block mid-rise buildings in Southern California as being bland, monotonous, and in opposition to the more visually alluring Vancouver model tower. Nice enough… (Photo credit: Urbdezine.com) But after a while… a little monotonous. Maxing out the block in San Diego. Making it impossible to cross-ventilate, let alone enjoy. The interior of the block is not throw-away space. –Howard Blackson

The Top 10 Smart Cities On The Planet Last year, I spent considerable time researching best practices for climate resilient cities—an endeavor that culminated in what I believe was the first ever global ranking of resilient cities. Now, after extensive research on smart cities initiatives around the globe, I have developed what may be the first ever global rankings of smart cities. The term "smart cities" is a bit ambiguous. Here, then, are the top 10 smart cities: 1.) 2.) 3.) 4.) 5.) 6.) 7.) 8.) 9.) 10.) There were many other strong candidates which are runners-up in this first ranking, including Amsterdam, Melbourne, Seattle, São Paulo, Stockholm, and Vancouver. Pundits and industry insiders expect smart cities to become a sizable market, with projections of nearly $40 billion spent on smart-cities technologies by 2016.

Kickstarting Open Source City Software: Transit App for iOS 6 and Beyond The way we get around is changing. We increasingly combine bikes and transit. And in many cities we’re seeing a birth of whole new modes of transport like bike-share and carshare. With support, OpenTripPlanner Mobile, an open source application developed by OpenPlans will put transit back on the iPhone. The people over at OpenPlans are a talented bunch, their New York Bike Share Trip Planner for example is nicely done. Open source tools to help make cities better, head over Transit App on KickStarter, at the time of writing they have raised $12,299 out of the $25,000 goal. Thank go to the Urban Mobility Daily

Urban Planning in the iPhone Age No one needs a good app quite like an urban planner. Sure, smart phones are useful for locating the nearest Starbucks or ruling on bar trivia. But the next wave of mobile applications do more than that—they collect massive amounts of data about how people live, where they travel and what they want to see in their neighborhoods. And they connect all of that with the officials in position to make decisions. Apps, in other words, offer potential solutions for two of the trickiest parts of the urban planner's job: sharing data and engaging citizens. "You're having the opportunity to engage new audiences, because a lot of people don’t have time to go to a public meeting," says Jennifer Evans-Cowley, a planning professor at Ohio State University. As a resident, you can weigh in on a local zoning dispute without getting sucked onto an voluminous email list. Evans-Cowley makes this case in a new paper on the app’s potential for urban planning.

Sustainable Roof Opportunities - Facility Management Roofing Feature StumbleUpon April 2012 - Roofing Roofs on institutional and commercial facilities used to be simply protective coverings for operations and equipment. But times have changed. A growing number of facilities now view rooftops as components that can provide significant value to the organization in the form of energy savings and sustainable attributes. Although the basic function of reflective roof coatings remains the same as it has been for years, the way the products' attributes and functions are defined has changed many customers' perspective on the products. Sustainability Sustainability has many meanings — long-lasting, life-cycle performance, and reparability. The new focus is on the use of biorenewable content, the use of recycled material, or an expected energy benefit. Increasing the life of an installed roofing system is the ultimate sustainable solution. Managers can have roof coatings reapplied to further extend the roof's life. Comments Browse Articles Find us on Google+

Boston Does Digital: What We Can Learn From A City That Is Getting It Right While driving around Boston one day, Nigel Jacob, co-chair of Boston’s Department of New Urban Mechanics, spied a group of public works employees at a job site staring intently at their phones. It turned out they were using Citizens Connect, an app Jacob’s department had developed for Bostonians to report public works issues, like potholes, street lights, and graffiti. Rather than following the arduous process of printing our requests and locating those requests on a map in order to fill a pothole, Public Works employees had discovered they could track requests as they came in using Citizens Connect. Some cities seem to take an approach to digital that either involves throwing a bunch of stuff against a wall to see what sticks, or focusing on back-end upgrades that are largely invisible to citizens. "Usually a government service is looking at the enterprise systems that they have and thinking about how to expose part of that," explains Nigel Jacob.

Do Real-Time Updates Increase Transit Ridership? Late last month Wade Roush of Xconomy took a long look at how Google is changing the way people interact with their public transportation systems. The search engine empire now publishes the operating schedules of more than 475 transit agencies around the world through its Google Maps and Google Transit platforms. And though it only displays live updates for four U.S. cities (plus two more in Europe), Google is pushing for more real-time status updates, Roush reports: Google’s activism in public transit is having widespread ripple effects. Roush is right to use the word "theory" here. Most agencies reported that there may have been an increase in ridership, but that they were not certain that it was a direct result of the system. Well you can break out the Betty Crocker, at least in Chicago. The CTA, which governs transit in Chicago and 40 surrounding suburbs, introduced its Bus Tracker system in August 2006 then rolled it out on certain routes between April 2008 and May 2009.

Arookoo, The Depressing App That "Makes Walking Fun" Every empire has its moments of decadence before its ultimate collapse. Those denizens of Easter Island cut down every last tree, ruining themselves. What, for Americans, will be our harbinger of doom? We wager that it's a new iPhone app/website/Facebook game that launched today, called Arookoo. Societal self-destruction: There's an app for that, and it comes to us from Vivity Labs. To be fair to the app itself, it's very well-meaning. Arookoo's aims are noble. But in case just going for a stroll doesn't cut it for you, Arookoo has you covered with a collection of features. For the record, we're not opposed to fitness apps in general, or the socialization of fitness data. What troubles us is when people who should be perfectly capable of going for a run can barely muster the will to get up off the couch without the help of an iPhone app or Facebook game. [Image: Flickr user .Jennifer Leigh.]

Sheltr App Helps You Direct The Homeless To Food, Shelter In many big cities, it’s tough to navigate the world of homeless shelters and food resources. In Philadelphia alone there are 40 shelters, four intake centers, and countless organizations that offer food to the hungry. There aren’t too many homeless people with smartphones, but the people who want to help them have them, and now they have all that information in one place with Sheltr, an app built to help users find the nearest shelter and food, to make the network of homeless services a little bit easier to deal with. Designed during the Random Hacks of Kindness hackathon in December 2011, Sheltr gathers information about meal providers, homeless intake facilities, shelters, and more, and makes it all easily searchable. Sheltr is currently only available in Philadelphia, the site of the hackathon. Of course, there are still some kinks to work out. The app might not be limited to Philadelphia for long.