The secrets of the world's happiest cities 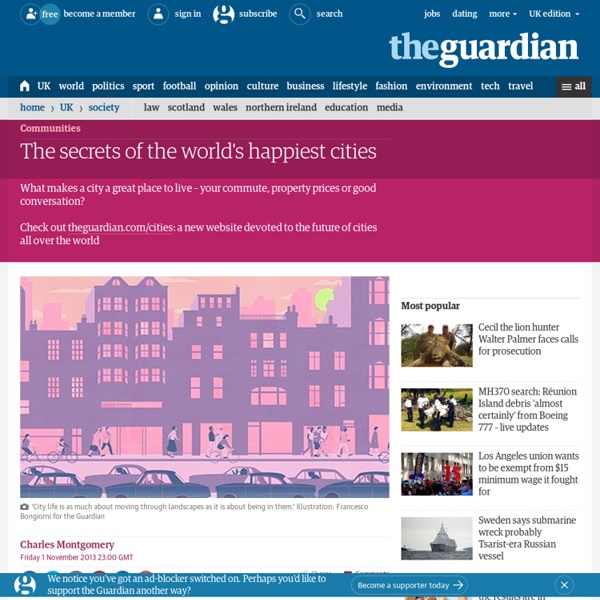 Two bodyguards trotted behind Enrique Peñalosa, their pistols jostling in holsters. There was nothing remarkable about that, given his profession – and his locale. Peñalosa was a politician on yet another campaign, and this was Bogotá, a city with a reputation for kidnapping and assassination. What was unusual was this: Peñalosa didn't climb into the armoured SUV. Instead, he hopped on a mountain bike. His bodyguards and I pedalled madly behind, like a throng of teenagers in the wake of a rock star. A few years earlier, this ride would have been a radical and – in the opinion of many Bogotáns – suicidal act. I first saw the Mayor of Happiness work his rhetorical magic back in the spring of 2006. Peñalosa insisted that, like most cities, Bogotá had been left deeply wounded by the 20th century's dual urban legacy: first, the city had been gradually reoriented around cars. In the third year of his term, Peñalosa challenged Bogotáns to participate in an experiment.

Nations are no longer driving globalization—cities are - Quartz Urbanization has already declared itself the mega-trend of the 21st century, with half the world’s population now living in cities for the first time in human history. While the implications for economic growth have been widely discussed, urbanization’s impact on diplomacy and sovereignty will be equally profound. Consider just two major issues on the global agenda: security and climate change. After the 9/11 terrorist attacks on New York City and the November 2008 terror attack on Mumbai, both cities moved to strengthen their own security services and intelligence capabilities beyond what Washington and Delhi could provide and mandate.

How to Stop Procrastinating by Using the “Seinfeld Strategy” Jerry Seinfeld is one of the most successful comedians of all‐time. He is regarded as one of the “Top 100 Comedians of All–Time” by Comedy Central. He was also the co–creator and co–writer of Seinfeld, the long–running sitcom which has received numerous awards and was claimed to have the “Top TV Episode of All–Time” as rated by TV Guide. According to Forbes magazine, Seinfeld reached his peak in earnings when he made $267 million dollars in 1998. (Yes, that was in one year. No, that’s not a typo.) The Real Reason Cities Are Centers of Innovation - Emily Badger It’s obvious from human history that people have long found unique value in living and working in cities, even if for reasons they couldn’t quite articulate. Put people together, and opportunities and ideas and wealth seem to grow at a more powerful rate than a simple sum of all our numbers. This has been intuitively true for centuries of city-dwellers. "What people didn’t know," says MIT researcher Wei Pan, "is why." There have been plenty of theories. Adam Smith famously figured that people become more productive when we’re able to specialize, each of us honing a separate area of expertise.

10 Years of Silence: How Long It Took Mozart, Picasso and Kobe Bryant to Be Successful 3.1K Flares Filament.io 3.1K Flares × How long does it take to become elite at your craft? And what do the people who master their goals do differently than the rest of us? That’s what John Hayes, a cognitive psychology professor at Carnegie Mellon University, wanted to know. For decades, Hayes has been investigating the role of effort, practice, and knowledge in top performers. He has studied the most talented creators in history — people like Mozart and Picasso — to determine how long it took them to become world class at their craft.

Dutch beat French and Swiss to top Oxfam’s new global food table Downloads “Having sufficient healthy and affordable food is not something that much of the world enjoys.” Winnie Byanyima Oxfam International Executive Director Japanese villages share their secrets for living longer - Protection now - AXA - BBC Good genes, diet and universal healthcare keep Japan at top of longevity tables. Japanese are renowned for their longevity, with the country regularly topping life expectancy tables. Now, the two villages where people live longer than anywhere else have met to exchange notes on how to live even longer. Representatives from the village of Matsukawa in Nagano have visited their counterparts in Kitanakagusukuon the island of Okinawa. According to the Japanese Ministry of Health, Labour and Welfare, Matsukawa has the country's longest average life expectancy for men at 82.2 years, while women in Kitanakagusuku live an average 89 years.

City2.0 On September 20, 2013, TEDCity2.0 took place at the TimesCenter in New York City. Co-curated and co-hosted by Chris Anderson, John Cary and Courtney Martin, the event surfaced stories of urban ingenuity and interdependence from across the globe, and featured an unexpected mix of over 20 speakers, including several 2012 City 2.0 Award winners. Livestreamed for free, the TEDCity2.0 anchor conference coincided with self-organized TEDxCity2.0 events over a 48-hour period. TEDx communities worldwide are envisioning the cities of our future and sharing big ideas about collaborative action and sustainable solutions. Certain speakers issued calls to action from the main stage.

The 10 Smartest Cities In Europe When it comes to smart cities, Europe is the model for the rest of the world to learn from. European cities tend to be denser, have better public transit, larger commitment to cycling and walking, a stronger focus on sustainability and low-carbon solutions, and perhaps most important, a culture and citizenry more engaged in the journey towards more sustainable and smarter cities. Of course this is a generalization: this series of regional ranking reports has demonstrated leadership from cities across the globe. But, as I wrote in our rankings of North America's smartest cities, our urban centers "demand 21st-century solutions to accommodate their growing populations in ways that not only maintain the quality of life, but also improve it. In short, smart cities are innovative cities." Without further ado, here is the top 10 smart cities for Europe in 2013 (and here's more about how we ranked them).