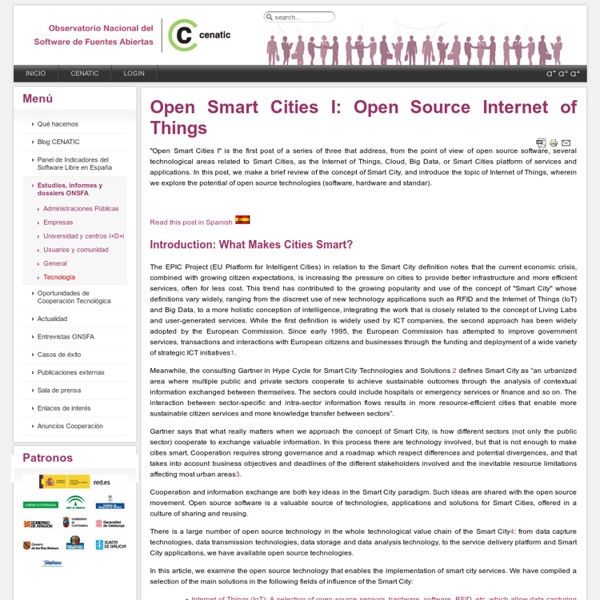 "Open Smart Cities I" is the first post of a series of three that address, from the point of view of open source software, several technological areas related to Smart Cities, as the Internet of Things, Cloud, Big Data, or Smart Cities platform of services and applications. In this post, we make a brief review of the concept of Smart City, and introduce the topic of Internet of Things, wherein we explore the potential of open source technologies (software, hardware and standar). Read this post in Spanish Introduction: What Makes Cities Smart? The EPIC Project (EU Platform for Intelligent Cities) in relation to the Smart City definition notes that the current economic crisis, combined with growing citizen expectations, is increasing the pressure on cities to provide better infrastructure and more efficient services, often for less cost. Cooperation and information exchange are both key ideas in the Smart City paradigm. 2. 2.1. More information: 2.2 Arduino More information: Website:

Communications content from Electronic Design Network everything! That’s the battle cry of the movement called the Internet of Things (IoT), or according to some, the Internet of Everything (IoE). Whatever the name, a major campaign is now underway to push along its long-awaited implementation. Most visible within this undertaking is machine-to-machine (M2M) connectivity. TheThings.io wants to be the Amazon Web Services for the Internet of Things Mobile executive? VB is hosting our 5th annual Mobile Summit on February 23–24 at the scenic Cavallo Point Resort in Sausalito, CA. See if you qualify here. The current state of play with the so-called Internet of Things (IoT) offers a tantalizing glimpse into the future of ubiquitous computing, with web-enabled thermostats, self-driving cars, and even connected kettles creeping into our daily lives.

Twine : Listen to your world, talk to the Internet by Supermechanical The Kickstarter is over, but if you missed out on backing us, not to worry. You can still join the thousands of other awesome Twine owners by pre-ordering on Supermechanical. It's the next best thing to being an original backer! Follow us on Facebook or Twitter. Want to hook up things to the Web? Thales VivaCity: Solutions for the Smart City World leader in Transport and Security systems, Thales has built an established presence within urban markets, including road, rail, tram, ticketing, passenger-information, supervision and control systems. Now, Thales VivaCity takes city integration to the next stage, with solutions for the smart city that deliver even greater synergies by leveraging concepts such as interoperability, connectivity, and the widespread availability of data. The approach offered by Thales VivaCity is to work together, with city authorities and operators, and implement individually tailored solutions for the smart city, that put the citizen first, drive citizen engagement, enable informed choices, and provide a better quality of life. Thales is helping cities to step up to the challenge of growing urbanisationby delivering city wide solutions that offer better and more integrated transport, safety,and security infrastructure that increases efficiency and improves quality of life.

Clients & Developer Tools RabbitMQ is officially supported on a number of operating systems and several languages. In addition, the RabbitMQ community has created numerous clients, adaptors and tools that we list here for your convenience. Please contact us with suggestions for things you would like to see added to this list. Perl RabbitFoot, an asynchronous and multi-channel RabbitMQ client using Coro and AnyEvent::RabbitMQ AnyEvent::RabbitMQ, an asynchronous and multi-channel RabbitMQ client

Cisco CEO: Internet of Things is the second generation of the Internet SAN FRANCISCO---From switching to the cloud to the Internet of Things, Cisco is determined to be the "number one IT company," according to the company's CEO John Chambers. Closing out the Goldman Sachs Technology and Internet Conference on Thursday, Chambers suggested if you start with the potential of a $19 trillion profit contribution and the belief every company will be digitized, these things will tie together through fast innovation as well as security. "It is the most fundamental change. You'd almost call it the second generation of the Internet," posited Chambers. Honing in on the cloud, Chambers insisted Cisco will be involved in virtually every development in this arena -- be whether new tech turns out to be complementary or competitive to Cisco's offerings. "We're back in vogue," Chambers quipped.

With iBeacon, Apple is going to dump on NFC and embrace the internet of things At WWDC in June, Apple quietly announced iBeacon, one of the more prominent features of iOS 7. Craig Federighi, Apple’s senior vice president of Software Engineering, mentioned nothing about about it in the keynote, and Apple hasn’t provided any details about it; it was only seen on one slide in the WWDC keynote. Nor did Apple say anything about it during the iPhone event Tuesday.

Smart Citizen : Smartcitizen What are the real levels of air pollution around your home or business? and what about noise pollution? and humidity? Now imagine that you could know them, share instantly and compare with other places in your city, in real time ... How could this information help to improve our environment quality? From Smart Citizen we want to answer to these questions and many more, through the development of low-cost sensors. Technology - Sensinode Ltd Sensinode is a technology leader for the Internet of Things, offering the latest open standard IP and Web technology optimized for constrained devices and networks. Sensinode is actively developing and promoting open standards at the IETF, ZigBee, ETSI and the IPSO Alliance. In a nutshell, this technology makes the Internet of Things possible by greatly reducing the complexity and overhead of key Internet and Web protocols. The Constrained Application Protocol (CoAP) enables web services for even the most constrained devices and networks, while integrating with the web architecture and HTTP. Standardized by the IETF, and optimized for applications such as Smart Energy, home and building automation, asset tracking and cellular M2M, CoAP is a key technology for turning the Internet of Things in to the Web of Things. Sensinode's NanoService solution uses CoAP, together with Sensinode's semantic web linking, resource directory and EXI technology, to provide end-to-end embedded web services.

6 Reasons Hackers Love the Internet of Things Haven't jumped on the Internet of Things (IoT) because of security concerns? New research from HP Fortify shows there's reason for caution. HP Fortify researchers reviewed ten IoT-connected home security systems and found all of them are vulnerable to account harvesting via the cloud connection or interface. But that’s not all. They also found all systems could work with weak security passwords, all of them were lacking an account lock-out mechanism, 90 percent didn’t have a two-factor authentication option and 70 percent had problems with systems updates. More Connections, More Risk PebbleBee - The Most Versatile iOS/Android Bluetooth Device by The PebbleBee The PebbleBee: Communicates with Bluetooth 4.0 Low Energy enabling a range of up to 150ft.Has the ability to operate in private mode for your privacy, to preserve battery life,and increase wireless performance. Is 5 mm thick and 40 mm diameter.Battery lasts up to 3 years – and can be replaced.Utilizes a 3-Axis gyroscope, 3-Axis Accelerometer and 3-Axis Compass.Includes a temperature sensor.Comes with a free API for developers will be made available to utilize all the PebbleBee functions and Sensor data for whatever you want! We've recently received the latest sample that is completely ultrasonically sealed. Keep in mind the app is still in development.

Gallery · mbostock/d3 Wiki Wiki ▸ Gallery Welcome to the D3 gallery! More examples are available on bl.ocks.org/mbostock. If you want to share an example and don't have your own hosting, consider using Gist and bl.ocks.org. If you want to share or view live examples try runnable.com or vida.io. Visual Index Building MongoDB into your Internet of Things: A Tutorial With the Internet of Things (IoT) poised to start pouring data into your organization, we thought it would be a good time to show you how you can bring that data into MongoDB so you can start analyzing it. In this article, we’re going to build a simple data acquisition device, use a common IoT protocol to efficiently get its data to a server, and then we’ll show how to plug into that server and turn the acquired data into a time series document in a MongoDB collection. More specifically we’re using a standard protocol, MQTT, for moving the data from an Arduino-based temperature sensor to a message broker and then use just over 32 lines of JavaScript to move that data into MongoDB. And we’ll show you how you can put this together yourself.