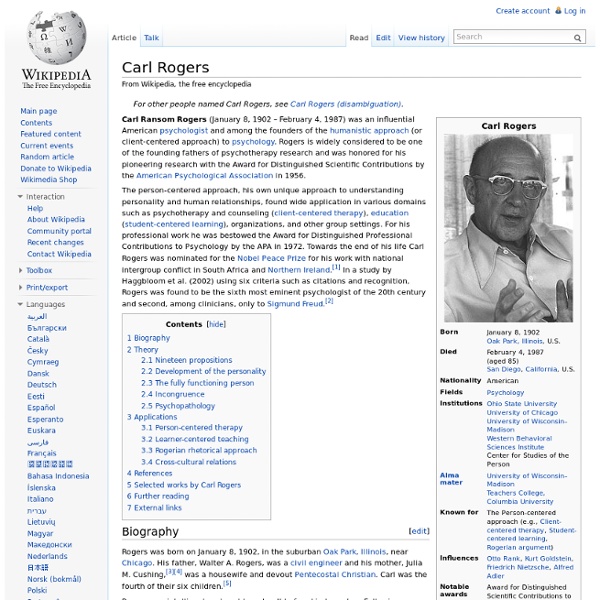 Carl Ransom Rogers (January 8, 1902 – February 4, 1987) was an influential American psychologist and among the founders of the humanistic approach (or client-centered approach) to psychology. Rogers is widely considered to be one of the founding fathers of psychotherapy research and was honored for his pioneering research with the Award for Distinguished Scientific Contributions by the American Psychological Association (APA) in 1956. The person-centered approach, his own unique approach to understanding personality and human relationships, found wide application in various domains such as psychotherapy and counseling (client-centered therapy), education (student-centered learning), organizations, and other group settings. For his professional work he was bestowed the Award for Distinguished Professional Contributions to Psychology by the APA in 1972. Biography[edit] Rogers was born on January 8, 1902, in Oak Park, Illinois, a suburb of Chicago. Theory[edit] Nineteen propositions[edit]

Aristotle Aristotle's views on physical science profoundly shaped medieval scholarship. Their influence extended into the Renaissance and were not replaced systematically until the Enlightenment and theories such as classical mechanics. Some of Aristotle's zoological observations, such as on the hectocotyl (reproductive) arm of the octopus, were not confirmed or refuted until the 19th century. His works contain the earliest known formal study of logic, which was incorporated in the late 19th century into modern formal logic. His ethics, though always influential, gained renewed interest with the modern advent of virtue ethics. The sum of his work's influence often ranks him among the world's top personalities of all time with the greatest influence, along with his teacher Plato, and his pupil Alexander the Great.[9][10] Life At about the age of eighteen, Aristotle moved to Athens to continue his education at Plato's Academy. Aristotle was appointed as the head of the royal academy of Macedon. Logic

Otto Rank Otto Rank (April 22, 1884 – October 31, 1939) was an Austrian psychoanalyst, writer, and teacher. Born in Vienna as Otto Rosenfeld, he was one of Sigmund Freud's closest colleagues for 20 years, a prolific writer on psychoanalytic themes, an editor of the two most important analytic journals, managing director of Freud's publishing house and a creative theorist and therapist. In 1926, Otto Rank left Vienna for Paris. For the remaining 14 years of his life, Rank had a successful career as a lecturer, writer and therapist in France and the U.S. (Lieberman & Kramer, 2012). In the Vienna Psychoanalytic Society[edit] In 1905, at the age of 21, Otto Rank presented Freud with a short manuscript on the artist, a study that so impressed Freud he invited Rank to become Secretary of the emerging Vienna Psychoanalytic Society. All emotional experience by human beings was being reduced by analysis to a derivative, no matter how disguised, of libido. Post-Vienna life and work[edit] Influence[edit]

John Dewey John Dewey (/ˈduːi/; FAA October 20, 1859 – June 1, 1952) was an American philosopher, psychologist, and educational reformer whose ideas have been influential in education and social reform. Dewey is one of the primary figures associated with philosophy of pragmatism and is considered one of the founders of functional psychology. A well-known public intellectual, he was also a major voice of progressive education and liberalism.[2][3] Although Dewey is known best for his publications concerning education, he also wrote about many other topics, including epistemology, metaphysics, aesthetics, art, logic, social theory, and ethics. Known for his advocacy of democracy, Dewey considered two fundamental elements—schools and civil society—as being major topics needing attention and reconstruction to encourage experimental intelligence and plurality. Life and works[edit] Along with the historians Charles A. Dewey was first married to Alice Chipman. Visits to China and Japan[edit]

Fritz Perls Friedrich (Frederick) Salomon Perls (July 8, 1893 – March 14, 1970), better known as Fritz Perls, was a noted German-born psychiatrist and psychotherapist. Perls coined the term 'Gestalt therapy' to identify the form of psychotherapy that he developed with his wife, Laura Perls, in the 1940s and 1950s. Perls became associated with the Esalen Institute in 1964, and he lived there until 1969. His approach to psychotherapy is related to, but not identical to, Gestalt psychology, and it is different from Gestalt Theoretical Psychotherapy. The core of the Gestalt Therapy process is enhanced awareness of sensation, perception, bodily feelings, emotion, and behavior, in the present moment. Perls has been widely cited outside the realm of psychotherapy for a quotation often described as the "Gestalt prayer". I do my thing and you do your thing.I am not in this world to live up to your expectations, and you are not in this world to live up to mine. Life[edit] Death[edit] Bibliography[edit]

Challenging the Presentation Paradigm with the 1/1/5 Rule A measure of how bad presentations in academia can be is the sheer number of tips and strategies we’ve suggested on ProfHacker, in a recurring series called Challenging the Presentation Paradigm. One of these techniques I’ve used in my classes for several years is the Pecha Kucha format. With 20 slides at 20 seconds per slide, a Pecha Kucha is, as Jason writes, necessarily “SHORT, INFORMAL, and CREATIVE.” However, as I’ve found out the hard way, a Pecha Kucha format does not necessarily mean students will avoid text-heavy slides, one of the major causes of DBP (Death By PowerPoint). That’s why I’ve begun implementing what I call the 1/1/5 rule for all student presentations. Here’s how I describe the 1/1/5 rule to my students: In addition to the time constraint of the Pecha Kucha, your presentation must also follow the 1/1/5 rule. The 1/1/5 rule is just a small tweak, but it has made all the difference. Have you tried similar techniques in your classrooms? Return to Top

Jacques Derrida Jacques Derrida (/ʒɑːk ˈdɛrɨdə/; French: [ʒak dɛʁida]; born Jackie Élie Derrida;[1] July 15, 1930 – October 9, 2004) was a French philosopher, born in French Algeria. Derrida is best known for developing a form of semiotic analysis known as deconstruction. He is one of the major figures associated with post-structuralism and postmodern philosophy.[3][4][5] During his career Derrida published more than 40 books, together with hundreds of essays and public presentations. He had a significant influence upon the humanities and social sciences, including—in addition to philosophy and literature—law[6][7][8] anthropology,[9] historiography,[10] linguistics,[11] sociolinguistics,[12] psychoanalysis, political theory, feminism, and queer studies. Particularly in his later writings, he frequently addressed ethical and political themes present in his work. Life[edit] Derrida was the third of five children. Derrida traveled widely and held a series of visiting and permanent positions.

Harry Beck B. F. Skinner Burrhus Frederic (B. F.) Skinner (March 20, 1904 – August 18, 1990) was an American psychologist, behaviorist, author, inventor, and social philosopher.[1][2][3][4] He was the Edgar Pierce Professor of Psychology at Harvard University from 1958 until his retirement in 1974.[5] Skinner invented the operant conditioning chamber, also known as the Skinner Box.[6] He was a firm believer of the idea that human free will was actually an illusion and any human action was the result of the consequences of that same action. He innovated his own philosophy of science called radical behaviorism,[9] and founded his own school of experimental research psychology—the experimental analysis of behavior, coining the term operant conditioning. Skinner discovered and advanced the rate of response as a dependent variable in psychological research. Biography[edit] The Skinners' grave at Mount Auburn Cemetery In 1936, Skinner married Yvonne Blue. Theory[edit] Schedules of reinforcement[edit] Air crib[edit]