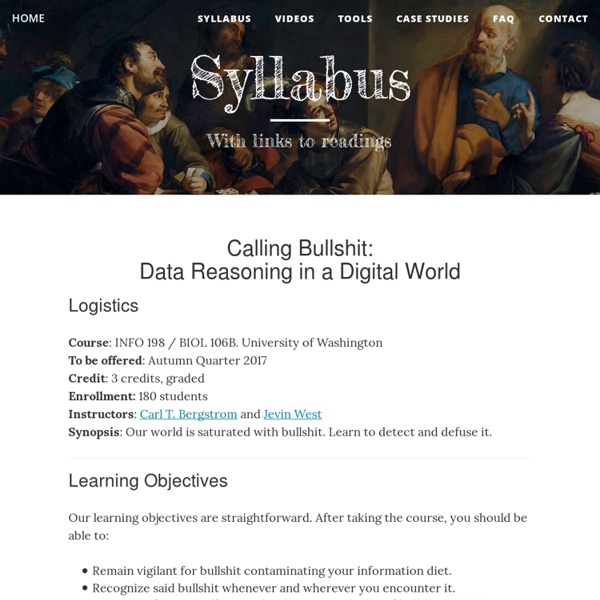 Logistics Course: INFO 198 / BIOL 106B. University of Washington To be offered: Autumn Quarter 2017 Credit: 3 credits, graded Enrollment: 180 students Instructors: Carl T. Bergstrom and Jevin West Synopsis: Our world is saturated with bullshit. Learn to detect and defuse it. Learning Objectives Our learning objectives are straightforward. Remain vigilant for bullshit contaminating your information diet. We will be astonished if these skills do not turn out to be among the most useful and most broadly applicable of those that you acquire during the course of your college education. Schedule and readings Each of the lectures will explore one specific facet of bullshit. Lectures Week 1. Harry Frankfurt (1986) On Bullshit. Supplementary readings Week 2. Week 3. Gordon Pennycook et al. (2015) On the reception and detection of pseudo-profound bullshit. Week 4. Supplementary reading Week 5. Simpson’s paradox: an interactive data visualization from VUDlab at UC Berkeley. Week 6. Week 7. Week 8. J.

MODNET MODNET is an FP6 Marie Curie Research Training Network in Model Theory and its Applications, funded by the European Commission under contract number MRTN-CT-2004-512234 (MODNET). It will run from 1 January 2005 to 31 December 2008. This project is designed to promote training and research in model theory, a part of mathematical logic dealing with abstract structures (models), historically with connections to other areas of mathematics. In the past decade, model theory has reached a new maturity, leading to striking applications to diophantine geometry, analytic geometry and Lie theory, as well as strong interactions with group theory, representation theory of finite-dimensional algebras, and the study of the p-adics. These developments are recent, and necessitate the training of young researchers in both the sophisticated tools of pure model theory, and in the field where they are likely to be applied. The training objectives are to:

Data Can Lie–Here’s A Guide To Calling Out B.S. According to the University of Washington professors Carl T. Bergstrom and Jevin West, it’s time someone did something about it. Their answer? The Bullshit Syllabus. It’s a free structured course of readings and case studies aimed at giving students (and anyone who might be interested) the tools to look critically at scientific claims driven by data and machine learning. Regional Transportation District (RTD) Back To Previous Regional Transportation District (RTD) Add To My Trip 1063_20090715_866_RTD.jpg Map data ©2017 Google Formal Methods Wiki Formal methods are mathematical techniques for developing computer-based software and hardware systems. Please update this page or add a new page if you know of relevant online information not included here or would like to maintain information on a particular topic. Use the comp.specification.misc newsgroup, for general formal methods queries. Please link to if you create a permanent hyperlink to this website. In case of problems, please contact Jonathan Bowen.

New paper: “Why most of psychology is statistically unfalsifiable” – Medium Daniël Lakens and I have been working on a new paper that serves as a comment on the Reproducibility Project: Psychology and Patil, Peng, and Leek’s (2016) use of prediction intervals to analyze the results. Our point of view on the RP:P echoes Etz and Vandekerckhove (2016): the neither the original studies nor the replications were, on the whole, particularly informative. We differ from Etz and Vandekerckhove in that we use a straightforward classical statistical analysis of differences between the studies, and we reveal that for most of the study pairs, even very large differences between the two results 1) cannot be detected by the design, and 2) cannot be rejected in light of the data. The reason is, essentially, that the resolution of the findings is simply lacking.

Scientists’ grasp of confidence intervals doesn’t inspire confidence Sometimes it’s hard to have confidence in science. So many results from published scientific studies turn out to be wrong. Part of the problem is that science has trouble quantifying just how confident in a result you should be. Plato Plato is one of the world's best known and most widely read and studied philosophers. He was the student of Socrates and the teacher of Aristotle, and he wrote in the middle of the fourth century B.C.E. in ancient Greece. Though influenced primarily by Socrates, to the extent that Socrates is usually the main character in many of Plato's writings, he was also influenced by Heraclitus, Parmenides, and the Pythagoreans. There are varying degrees of controversy over which of Plato's works are authentic, and in what order they were written, due to their antiquity and the manner of their preservation through time. Nonetheless, his earliest works are generally regarded as the most reliable of the ancient sources on Socrates, and the character Socrates that we know through these writings is considered to be one of the greatest of the ancient philosophers.

Charles Sanders Peirce 1. Brief Biography Charles Sanders Peirce was born on September 10, 1839 in Cambridge, Massachusetts, and he died on April 19, 1914 in Milford, Pennsylvania. The Increasing Problem With the Misinformed (by @baekdal) #analysis When discussing the future of newspapers, we have a tendency to focus only on the publishing side. We talk about the changes in formats, the new reader behaviors, the platforms, the devices, and the strange new world of distributed digital distribution, which are not just forcing us to do things in new ways, but also atomizes the very core of the newspaper. But while the publishing side of things is undergoing tremendous changes, so is the journalistic and editorial side. The old concept of creating a package of news was designed for a public that we assumed was uninformed by default, but this is no longer the case. The public is no longer uninformed. They are misinformed, and that requires an entirely different editorial focus.

Teacher effectiveness: Separate study confirms many Los Angeles Times findings A study to be released Monday confirms the broad conclusions of a Times' analysis of teacher effectiveness in the Los Angeles Unified School District while raising concerns about the precision of the ratings. FOR THE RECORD:Teacher effectiveness: An article in the Feb. 7 LATExtra section about a University of Colorado study of L.A. Unified School District teacher effectiveness said researchers found that up to 9% of math teachers and 12% of English teachers ended up in different categories than those in a separate analysis by The Times. These percentages referred only to teachers whom The Times rated as more effective than average but whom the Colorado researchers found to be indistinguishable from average.

Research centers Research teams and centers : Europe - North America - Other Publications - Blogs - Organizations and conferences - Mailing lists - Software - Other Here is a list of research groups and departments (and some isolated logics specialists in other departments) in the foundations of mathematics and computer science (logic, set theory, model theory, theoretical computer science, proof theory, programming languages). Created by Sylvain Poirier, author of this site of introduction to set theory and foundations of mathematics and physics, in July 2012 (see note).