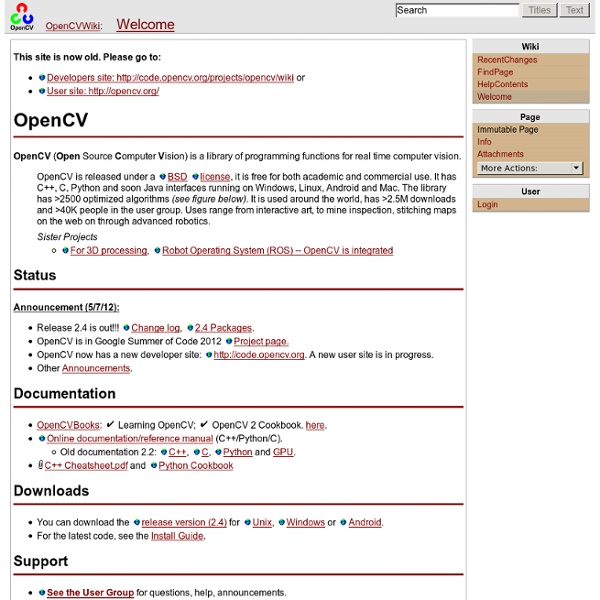 40 Essential Tools and Resources to Visualize Data One of the most frequent questions I get is, "What software do you use to visualize data?" A lot of people are excited to play with their data, but don't know how to go about doing it or even start. Here are the tools I use or have used and resources that I own or found helpful for data visualization â€“ starting with organizing the data, to graphs and charts, and lastly, animation and interaction. Organizing the Data by sleepy sparrow Data are hardly ever in the format that you need them to be in. Homepage - Handbook Homepage Introduction¶ For a great overview of the platform, see: Explore mbed For more detailed introductions for specific aspects of the mbed platform, see:

OpenCV History[edit] Advance vision research by providing not only open but also optimized code for basic vision infrastructure. No more reinventing the wheel.Disseminate vision knowledge by providing a common infrastructure that developers could build on, so that code would be more readily readable and transferable.Advance vision-based commercial applications by making portable, performance-optimized code available for free—with a license that did not require to be open or free themselves. The first alpha version of OpenCV was released to the public at the IEEE Conference on Computer Vision and Pattern Recognition in 2000, and five betas were released between 2001 and 2005. The first 1.0 version was released in 2006. In mid-2008, OpenCV obtained corporate support from Willow Garage, and is now again under active development.

Style space: How to compare image sets and follow their evolution (part 4) This is part 4 of a four part article. Part 1, Part 2, Part 3. Text: Lev Manovich. The Beginner's Guide to Social Media Whether it's keeping up on the latest web memes on Reddit or Tumblr, following your favorite comedians on Twitter, profesionally networking on LinkedIn, or staying in touch with college friends on Facebook, social media has become an integrated and constant part of our everyday lives. To digital natives, it may be difficult to imagine a world where these tools aren't at our fingertips, but the fact is, new users join these services every day. For the uninitiated, check out our beginner's guides to get started on Tumblr, Twitter, Reddit, LinkedIn and Facebook. 1.

Web-design and development from the Huntington, WV, Ashland, KY, and Ironton, OH tristate area Difficulty Level: Beginner In this small series, we’re going to learn how to use Github in real world situations. For instance, if you’re a frontend developer and you want to work with a PHP developer on the same project at the same time. OPENCV \ library OpenCV is an open source computer vision library originally developed by Intel. It is free for commercial and research use under a BSD license. The library is cross-platform, and runs on Mac OS X, Windows and Linux. It focuses mainly towards real-time image processing, as such, if it finds Intel's Integrated Performance Primitives on the system, it will use these commercial optimized routines to accelerate itself. This implementation is not a complete port of OpenCV.

New University of Utah center offers some serious computing muscle to handle 'extreme data' SALT LAKE CITY — A picture may be worth a thousand words, but in the fields of science, they can be worth billions and billions of bytes of information. A few years ago, then Hewlett-Packard CEO Mark Hurd said "more data will be created in the next four years than in the history of the planet." Hurd's prediction was understated. Studies have showed that humanity has created more computer data than all documents in the entire past 40,000 years — and that was in 2007. Housed within tall whirring towers of servers at the University of Utah's Scientific Computing and Imaging Institute are mind-boggling amounts of information: global weather data, chemistry combustion simulations on space shuttle heat shield panels, or physics experiments, just to name a few. Computer science professor Valerio Pascucci holds an iPad in his hands with what looks like a gray rock canyon.

DSP Robotics FlowStone uses a combination of graphical and text based programming. Applications are programmed by linking together functional building blocks called components. Events and data then flow between the links as the application executes. All this happens instantly - there's no compiling, your application runs as you build it making development an extremely rapid process. FlowStone allows you to create your own components using Ruby. This is a very modern language that is incredibly easy to pick up.