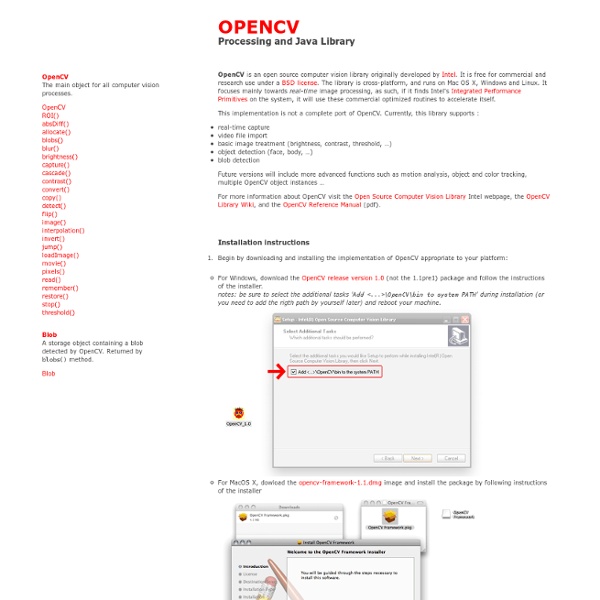 OpenCV is an open source computer vision library originally developed by Intel. It is free for commercial and research use under a BSD license. The library is cross-platform, and runs on Mac OS X, Windows and Linux. This implementation is not a complete port of OpenCV. real-time capture video file import basic image treatment (brightness, contrast, threshold, …) object detection (face, body, …) blob detection Future versions will include more advanced functions such as motion analysis, object and color tracking, multiple OpenCV object instances … For more information about OpenCV visit the Open Source Computer Vision Library Intel webpage, the OpenCV Library Wiki, and the OpenCV Reference Manual (pdf). Installation instructions Optionally, you can download these OpenCV Processing examples or, for pure Java users, these OpenCV Java samples. Documentation Credits The OpenCV Processing Library is a project of the Atelier hypermédia at the École Supérieure d'Art d'Aix-en-Provence. Related:  openCVjava

BlobDetection library / v3ga This library is aimed at doing computer vision by finding ‘blobs’ on an image , that is to say areas whose brightness is above or below a particular value. It allows to compute blobs’edges as well as blobs’bounding box. However, this library does not perform blob tracking, it only tries to find all blobs each frame it was fed with. It was primarly developped for Processing but can be used in any java programs. October 2012 I just updated the examples of the library to work with the latest version of Processing (2.0b3). The examples still work with Processing 1.5.1 but you have to see the instructions in the code. August 2011 Wow. September 2006 Publishing this new website. December 2005 Added computation of triangles for each blobs, allowing fast drawing of filled blobs. May 2005 Release as .jar, which can be included in Processing (BETA). June 2004 First release of an EdgeDection procedure.

OpenCV History[edit] Advance vision research by providing not only open but also optimized code for basic vision infrastructure. No more reinventing the wheel.Disseminate vision knowledge by providing a common infrastructure that developers could build on, so that code would be more readily readable and transferable.Advance vision-based commercial applications by making portable, performance-optimized code available for free—with a license that did not require to be open or free themselves. The first alpha version of OpenCV was released to the public at the IEEE Conference on Computer Vision and Pattern Recognition in 2000, and five betas were released between 2001 and 2005. The second major release of the OpenCV was on October 2009. In August 2012, support for OpenCV was taken over by a non-profit foundation, OpenCV.org, which maintains a developer[2] and user site.[3] Applications[edit] OpenCV's application areas include: Programming language[edit] OS support[edit] Windows prerequisites[edit]

OpenCV::detect() \ language (API) Detect object(s) in the current image depending on the current cascade description. This method finds rectangular regions in the current image that are likely to contain objects the cascade has been trained to recognize. It returns found regions as a sequence of rectangles. The default parameters (scale=1.1, min_neighbors=3, flags=0) are tuned for accurate (but slow) object detection. For a faster operation on real-time images, the more preferable settings are: scale=1.2, min_neighbors=2, flags=HAAR_DO_CANNY_PRUNING, min_size= Mode of operation flags: for each scale factor used the function will downscale the image rather than "zoom" the feature coordinates in the classifier cascade. If it is set, the function uses Canny edge detector to reject some image regions that contain too few or too much edges and thus can not contain the searched object. If it is set, the function finds the largest object (if any) in the image.

blobscanner - A blob detection library for Processing. Blobscanner is a small lightweight library for the Processing Programming Environment which can be used for blob detection and analysis in images and videos. It performs quite well, also, when the signal analyzed is a live stream. Please refer to the project blog for information about the status of this project. In the following image is visible an example of hand tracking using Blobscanner in conjunction with a skin detector algorithm. The hand center of mass can be easily computed with Blobscanner. In this video, Blobscanner is used to create a simple artistic effect on a web cam video stream. NOTE: the code repository for the new version (v. 0.1-alpha) is hosted on github If you wish you can donate to this project with Flattr or you can use Paypal on blobscanner site (here isn't allowed).

HandVu Application Documentation homepage | index | basics | common | ARtk demo | troubleshooting HandVu Application Documentation This document assumes that you have successfully installed HandVu and at least one of the sample applications on your system. Please read at least the basics and common functionality. While a lot of functionality is common to all sample applications, some key shortcuts do not work in all applications, indicated with a (*). Basics: Setup and Hand Postures Camera: HandVu is designed for a camera that views the space in front of a sitting or standing person from a top-down view. Hand detection: The hand is detected only in a standard posture and orientaentirelytion with respect to the camera, called the closed posture: recognized postures. Hand tracking: Once the hand has been detected, you can move the hand around in any posture. Posture recognition: All of the six recognized postures can be performed at any time during tracking and they will be recognized. Common Functionality GestureServer

OpenCV 2 in Processing | codeanticode Xavier Hinault recently released a new computer vision library for Processing, based on JavaCV and OpenCV 2: JavacvPro. This is a great contribution to the community, since it appears that the development of the original OpenCV library for Processing has stalled, without moving beyond OpenCV 1.0 support. JavacvPro is based on the very solid JavaCV wrappers by Samuel Audet, which provide access to the latest version of OpenCV (2.3.1 at the time of writing this), and in fact also allows to use other computer vision frameworks like OpenKinect, and ARToolKit. The basic requirement to use JavacvPro is to install OpenCV 2.3.1. Windows installation from pre-compiled binaries: Linux install from source: MacOSX (also from source): Like this: Like Loading...