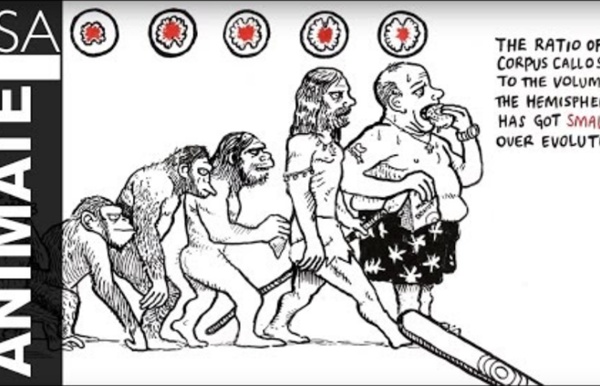 getSharedSiteSession?rc=1&redirect= Figure 1 Schematic representation of a chick's use of the frontal or lateral field of vision before pecking (α indicates the angle used to peck at the target in this case) Figure 2 Number of pecks directed at a conspecific and at the environment in pairs of companion and stranger chicks. There were more pecks at strangers than at companions in both L- and D-chicks [test condition: F(1, 34) = 16.313, p < 0.001; hatching condition: F(1, 34) = 0.050 (not significant, or “ns”); test × hatching: F(1, 34) = 0.300 (ns)].

Group settings can diminish expressions of intelligence, especially among women In the classic film 12 Angry Men, Henry Fonda's character sways a jury with his quiet, persistent intelligence. But would he have succeeded if he had allowed himself to fall sway to the social dynamics of that jury? Research led by scientists at the Virginia Tech Carilion Research Institute found that small-group dynamics -- such as jury deliberations, collective bargaining sessions, and cocktail parties -- can alter the expression of IQ in some susceptible people. "You may joke about how committee meetings make you feel brain dead, but our findings suggest that they may make you act brain dead as well," said Read Montague, director of the Human Neuroimaging Laboratory and the Computational Psychiatry Unit at the Virginia Tech Carilion Research Institute, who led the study.

A better way to remember Scientists and educators alike have long known that cramming is not an effective way to remember things. With their latest findings, researchers at the RIKEN Brain Science Institute in Japan, studying eye movement response in trained mice, have elucidated the neurological mechanism explaining why this is so. Published in the Journal of Neuroscience, their results suggest that protein synthesis in the cerebellum plays a key role in memory consolidation, shedding light on the fundamental neurological processes governing how we remember. The "spacing effect," first discovered over a century ago, describes the observation that humans and animals are able to remember things more effectively if learning is distributed over a long period of time rather than performed all at once. Explaining this observation, the researchers found that the spacing effect was impaired when mice were infused with anisomycin and actinomycin D, antibiotics which inhibit protein synthesis.

Psychedelic Science This past weekend, the Psychedelic Science 2013 Conference, co-hosted by the Multidisciplinary Association for Psychedelic Studies (MAPS), took over two floors of the Oakland Marriott City Center, with attendees spilling into bars and waiting areas. Though the illicit thrill of psychedelics (written in rainbow letters on the conference bric-a-brac) was dampened somewhat by the staid surroundings of the convention center, recreational drug users and academics alike networked at a conference that UC Berkeley professor of molecular and cell biology David Presti deemed “extraordinary.” Over five days, researchers discussed their clinical studies with LSD, psilocybin, MDMA, ayahuasca and other psychedelic drugs, and focused on the drugs’ therapeutic benefits.

How birds use their eyes: Opposite left-right specialization for the lateral and frontal visual hemifield in the domestic chick Open Archive Abstract Recent evidence has demonstrated that, in animals with laterally placed eyes, functional cerebral asymmetry is revealed by preferential use of either the left or right eye in a range of behaviors (birds: 1, 2 and 3; fish: 4 and 5; reptiles: 6 and 7). These findings pose a theoretical problem. It seems that there would be disadvantages in having a substantial degree of asymmetry in the use of the two eyes; a deficit on one side would leave the organism vulnerable to attack on that side or unable to exploit resources appearing on one side. Science overturns view of humans as naturally 'nasty' Biological research increasingly debunks the view of humanity as competitive, aggressive and brutish, a leading specialist in primate behavior told a major science conference Monday. "Humans have a lot of pro-social tendencies," Frans de Waal, a biologist at Emory University in Atlanta, told the annual meeting of the American Association for the Advancement of Science. New research on higher animals from primates and elephants to mice shows there is a biological basis for behavior such as cooperation, said de Waal, author of "The Age of Empathy: Nature's Lessons for a Kinder Society." Until just 12 years ago, the common view among scientists was that humans were "nasty" at the core but had developed a veneer of morality -- albeit a thin one, de Waal told scientists and journalists from some 50 countries. But human children -- and most higher animals -- are "moral" in a scientific sense, because they need to cooperate with each other to reproduce and pass on their genes, he said.

It "Rewires Your Brain?" Think Again. It seems so archaic: I type with my fingers and I use my hands to drive. Isn't there a better interface than the body? I want devices that can read my mind. Psychology of Color [Infographic] Perhaps no choice is as vital to marketing as color. Whether you are selecting the color for a product or for your email marketing campaign, color has tremendous impact on all of us. Subconsciously, we associate different colors with different things. BLOCK DIAGRAM OF THE VISUAL CORTEX IN HUMANS Last Update: July 2009 Rhodonine™ and Activa™: See Citation Page The following figure is presented here at reduced scale (resolution) to accommodate a browser. Block Diagram of the Cortical System in humans, with emphasis on vision. [from Section 15.2] A larger scale version appears in Chapter 15 and is available for download in the Download Files area reached from the Site navigation bar. This figure illustrates how sensory information is fed to the higher perceptual areas of the cortex for evaluation via a series of feature extraction engines.

1. Dangers of Crying It Out Letting babies "cry it out" is an idea that has been around since at least the 1880s when the field of medicine was in a hullaballoo about germs and transmitting infection and so took to the notion that babies should rarely be touched (see Blum, 2002 , for a great review of this time period and attitudes towards childrearing). In the 20 th century, behaviorist John Watson (1928), interested in making psychology a hard science, took up the crusade against affection as president of the American Psychological Association. He applied the mechanistic paradigm of behaviorism to child rearing, warning about the dangers of too much mother love. The 20 th century was the time when "men of science" were assumed to know better than mothers, grandmothers and families about how to raise a child.