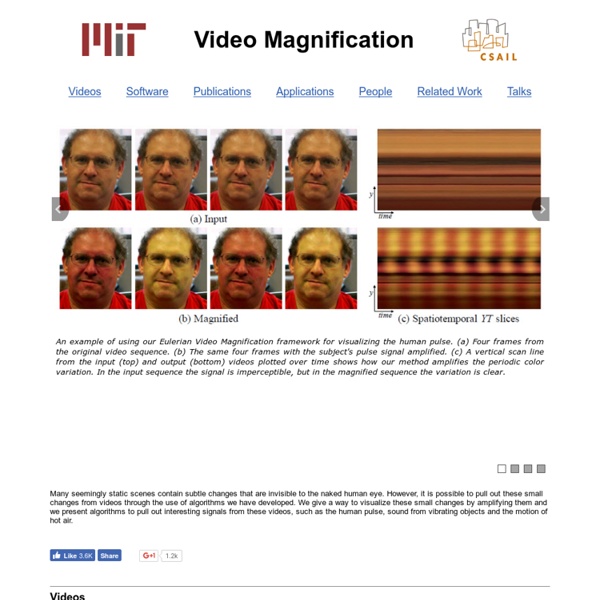 banner slider Many seemingly static scenes contain subtle changes that are invisible to the naked human eye. However, it is possible to pull out these small changes from videos through the use of algorithms we have developed. We give a way to visualize these small changes by amplifying them and we present algorithms to pull out interesting signals from these videos, such as the human pulse, sound from vibrating objects and the motion of hot air. Videos Software and Code Eulerian Video Magnification code Matlab code and executables implementing Eulerian video processing for amplifying color and motion changes. Phase Based Video Motion Processing code Matlab code for implementing the new and improved phase-based motion magnification pipeline. Videoscope Web interface for motion and color magnification. Publications (Magnifying Motion and Color Changes) Publications (Analysis of Small Motions) People Faculty: Students, Postdocs and Affiliates: Collaborators: Edward H. Talks

A Super-Absorbent Solar Material A new nanostructured material that absorbs a broad spectrum of light from any angle could lead to the most efficient thin-film solar cells ever. Researchers are applying the design to semiconductor materials to make solar cells that they hope will save money on materials costs while still offering high power-conversion efficiency. Initial tests with silicon suggest that this kind of patterning can lead to a fivefold enhancement in absorbance. Conventional solar cells are typically a hundred micrometers or more thick. Some researchers are turning to exotic optical effects that emerge at the nanoscale to solve this conundrum. Atwater worked with Koray Aydin, now an assistant professor of electrical engineering and computer science at Northwestern University, to develop the super-absorber design, which takes advantage of a phenomenon called optical resonance. Aydin and Atwater are now doing just that.

Platforms The Aalto University Platforms are designed to initiate and coordinate multi- and interdisciplinary research and teaching in some thematic area. The Platforms bring together Aalto's competences in the area, and increase Aalto's external visibility. Primary purposes of the Platforms are to facilitate and strengthen the industry-academia collaboration, and to increase the internal cooperation within the University. The Platforms and their agendas are born through a bottom-up process, and aim at concrete benefits for the participating actors.

Down to the wire: Inexpensive technique for making high quality nanowire solar cells developed (PhysOrg.com) -- Solar or photovoltaic cells represent one of the best possible technologies for providing an absolutely clean and virtually inexhaustible source of energy to power our civilization. However, for this dream to be realized, solar cells need to be made from inexpensive elements using low-cost, less energy-intensive processing chemistry, and they need to efficiently and cost-competitively convert sunlight into electricity. A team of researchers with the U.S. Department of Energy (DOE)'s Lawrence Berkeley National Laboratory has now demonstrated two out of three of these requirements with a promising start on the third. Peidong Yang, a chemist with Berkeley Lab's Materials Sciences Division, led the development of a solution-based technique for fabricating core/shell nanowire solar cells using the semiconductors cadmium sulfide for the core and copper sulfide for the shell. Explore further: New physical phenomenon on nanowires seen for the first time

Challenge 5 - Curate Resources using Pearltrees If you listened to the episode of the Instructional Tech Talk podcast that discussed curating content in the classroom you know how valuable curating resources can be both with students and for your own resources. Social bookmarking has become a huge activity – spreading many genres and via many platforms. It has revolutionized the way in which we share and find information. Like I mentioned, there are many ways to participate in social content curation and each way looks a little different. Pearltrees is a way to store all the websites you use on a regular basis (and even the ones that you won’t use again for 2 years) to allow for instant reference. The Challenge Create a Pearltrees account and start curating resources. How to Complete the Challenge 1. 2. 3. 4. 5. 6. 7. Here is a brief screencast showing you how to get signed up and started with Pearltrees:

Radically Cheap: The Story of Pat Delany, Open Source Machine Tools Advocate The ex-rancher felt empathy push his problem-solving mind into a new direction. He looked back at all those years he had tinkered with junk-built machine tools in his workshop — all that time spent poring over scans of antique how-to magazines looking for clever hacks to avoid having to buy new tools. It was fun and sometimes necessary for me, he thought, but what I’ve created here can also help many people. This is the story of Pat Delany, one of the leading creative voices in Appropriate Technology — technology that is small-scale, decentralized, labor-intensive, energy-efficient, environmentally sound, and locally controlled. This 78-year-old grandfather came to the field as an outsider, inspired by a second-hand description of a news photo. But his visionary home-built machine-tool designs now have the potential to help millions bootstrap themselves out of poverty. Delany had worked with machines for his entire life and built many machines for himself. The MultiMachine Lost Wisdom

Japan Earthquake, 2 Years Later: Before and After - In Focus In a few days, Japan will mark the 2nd anniversary of the devastating Tohoku earthquake and resulting tsunami. The disaster killed nearly 19,000 across Japan, leveling entire coastal villages. Now, nearly all the rubble has been removed, or stacked neatly, but reconstruction on higher ground is lagging, as government red tape has slowed recovery efforts. Use j/k keys or ←/→ to navigate Choose: The tsunami-devastated Kesennuma in Miyagi prefecture, is pictured in this side-by-side comparison photo taken March 12, 2011 (left) and March 4, 2013 (right), ahead of the two-year anniversary of the March 11 earthquake and tsunami that damaged so much of northeastern Japan. This before-after pair of images shows a private plane, cars and debris outside Sendai Airport in Natori, Miyagi prefecture on March 13, 2011, and the same area two years later, on February 21, 2013. - javascript required

IEEE Global Humanitarian Technology Conference (GHTC) New nuke could POWER WORLD UNTIL 2083 High performance access to file storage Could not load plugins: File not found A company spun off from MIT is claiming it has cracked the holy grail of nuclear technology: a reactor design that runs on materials the industry currently discards as waste and which could meet all of the world's power demands for the next 70 years. The Waste Annihilating Molten Salt Reactor (WAMSR) is based on designs first dreamt up in the 1950s for reactors that used liquid rather than solid fuels. Most conventional nuclear reactors – in the US at least – are light-water reactors, but this design has a number of disadvantages. They also suffer from safety problems, since an external power source is required to cool the reaction chamber and to shut down the plant if necessary. The WAMSR takes "waste" fuel pellets and dissolves them in molten salt. WAMSR – silly name but lovely concept As a safety feature, WAMSR's liquid-fuel pipes are connected to a drain plug of salt that has been frozen solid.

The R Project for Statistical Computing DARPA combines human brains and 120-megapixel cameras to create the ultimate military threat detection system After more than four years of research, DARPA has created a system that successfully combines soldiers, EEG brainwave scanners, 120-megapixel cameras, and multiple computers running cognitive visual processing algorithms into a cybernetic hivemind. Called the Cognitive Technology Threat Warning System (CT2WS), it will be used in a combat setting to significantly improve the US Army’s threat detection capabilities. There are two discrete parts to the system: The 120-megapixel camera, which is tripod-mounted and looks over the battlefield (pictured below); and the computer system, where a soldier sits in front of a computer monitor with an EEG strapped to his head (pictured above). Images from the camera are fed into the computer system, which runs cognitive visual processing algorithms to detect possible threats (enemy combatants, sniper nests, IEDs). In short, CT2WS taps the human brain’s unsurpassed ability to recognize objects. Now read: Changing the world: DARPA’s top inventions

NW Engineers’ Christmas Lecture: The Four Facets of Alan Turing and our work on Morphogenesis by Tuesday, 4 Dec 2012 , 6:00 PM - 8:00 PMLocation: John Dalton Building, MMU, Chester Street/Oxford Road, M15 6BH Add this event to your calendar iCal Speaker: Prof. This free NW Engineers Christmas Lecture is organised by the Joint Institutions Group. This Talk will demonstrate that Alan Turing was a man of many talents, but that these were not all recognised simultaneously during his life-time: indeed, some were not fully recognised until after his death. About the Speaker Professor Bernard Richards served as Professor of Computation and Professor of Medical Informatics at UMIST. As a young man, Bernard studied as the MSc student of Alan Turing in the University of Manchester, working with him on his equations of morphogenesis. Bernard’s recollections of Turing have been placed in the Jubliee Time Capsule, The Legacy of Alan Turing by his Student Bernard Richards. Getting to This Event John Dalton Building, MMUChester Street/Oxford Road, M15 6BHGet Directions