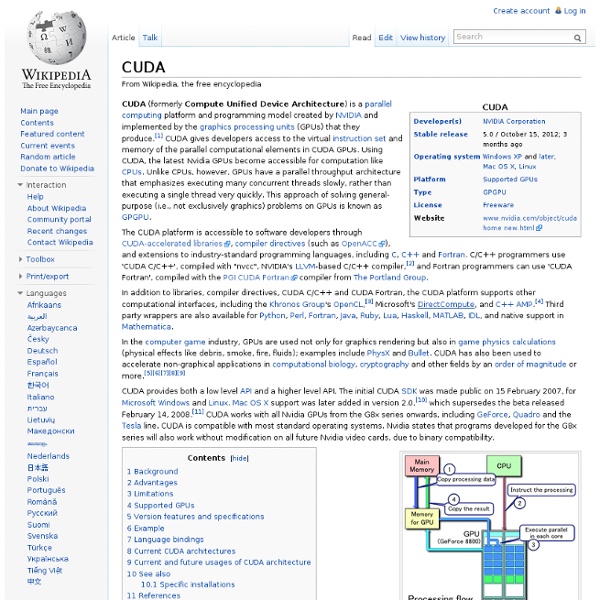 CUDA (Compute Unified Device Architecture) is a parallel computing platform and programming model created by NVIDIA and implemented by the graphics processing units (GPUs) that they produce.[1] CUDA gives program developers direct access to the virtual instruction set and memory of the parallel computational elements in CUDA GPUs. Using CUDA, the GPUs can be used for general purpose processing (i.e., not exclusively graphics); this approach is known as GPGPU. Unlike CPUs, however, GPUs have a parallel throughput architecture that emphasizes executing many concurrent threads slowly, rather than executing a single thread very quickly. CUDA provides both a low level API and a higher level API. Example of CUDA processing flow 1. Background[edit] The GPU, as a specialized processor, addresses the demands of real-time high-resolution 3D graphics compute-intensive tasks. Advantages[edit] CUDA has several advantages over traditional general-purpose computation on GPUs (GPGPU) using graphics APIs:

Shell (computing) A shell in computing provides a user interface for access to an operating system's services. "Shell" is also used loosely to describe applications, including software that is "built around" a particular component, such as web browsers and email clients that are, in themselves, "shells" for HTML rendering engines. The term "shell" in computing, being the outer layer between the user and the operating system kernel, is synonymous with the general word "shell". Generally, operating system shells use either a command-line interface (CLI) or graphical user interface (GUI). The optimum choice of user interface depends on a computer's role and particular operation. In expert systems, a shell is a piece of software that is an "empty" expert system without the knowledge base for any particular application.[4] A command-line interface (CLI) is an operating system shell that uses alphanumeric characters typed on a keyboard to provide instructions and data to the operating system, interactively.

Welcome to PyOpenCL’s documentation! — PyOpenCL v0.92 documentation PyOpenCL gives you easy, Pythonic access to the OpenCL parallel computation API. What makes PyOpenCL special? Object cleanup tied to lifetime of objects. This idiom, often called RAII in C++, makes it much easier to write correct, leak- and crash-free code.Completeness. Here’s an example, to give you an impression: (You can find this example as examples/demo.py in the PyOpenCL source distribution.) Bogdan Opanchuk’s reikna offers a variety of GPU-based algorithms (FFT, random number generation, matrix multiplication) designed to work with pyopencl.array.Array objects.Gregor Thalhammer’s gpyfft provides a Python wrapper for the OpenCL FFT library clFFT from AMD. If you know of a piece of software you feel that should be on this list, please let me know, or, even better, send a patch!

Signal processing and the evolution of NAND flash memory Fueled by rapidly accelerating demand for performance-intensive computing devices, the NAND flash memory market is one of the largest and fastest-growing segments of the semiconductor industry, with annual sales of nearly $20 billion. During the past decade, the cost per bit of NAND flash has declined by a factor of 1,000, or a factor of 2 every 12 months, far exceeding Moore’s Law expectations. This rapid price decline has been driven by aggressive process geometry scale-down and by an increase in the number of bits stored in each memory cell from one to two and three bits per cell. As a consequence, the endurance of flash memory – defined as the number of Program and Erase (P/E) cycles that each memory cell can tolerate throughout its lifetime – is severely degraded due to process and array impairments, resulting in a nonlinear increase in the number of errors in flash memory. Getting past errors The most commonly used ECCs for flash memory are Bose-Chaudhuri-Hocquenghem (BCH) codes.

Unix shell tcsh and sh shell windows on a Mac OS X desktop. The most influential Unix shells have been the Bourne shell and the C shell, These shells have both been used as the coding base and model for many derivative and work-alike shells with extended feature sets. The C shell, csh, was written by Bill Joy while a graduate student at University of California, Berkeley. The language, including the control structures and the expression grammar, was modeled on C. Concept[edit] On hosts with a windowing system, some users may never use the shell directly. Graphical user interfaces for Unix, such as GNOME, KDE, and Xfce are sometimes called visual or graphical shells. Bourne shell[edit] The Bourne shell was one of the major shells used in early versions of the Unix operating system and became a de facto standard. The POSIX standard specifies its standard shell as a strict subset of the Korn shell, an enhanced version of the Bourne shell. C shell[edit] Shell categories[edit] Bourne shell compatible[edit]

GPU Computing Major chip manufacturers are developing next-generation microprocessor designs that are heterogeneous/hybrid in nature, integrating homogeneous x86-based multicore CPU components and GPU components. The MAGMA (Matrix Algebra on GPU and Multicore Architectures) project’s goal is to develop innovative linear algebra algorithms and to incorporate them into a library that is • similar to LAPACK in functionality, data storage, and interface but targeting the • next-generation of highly parallel, and heterogeneous processors. This will allow scientists to effortlessly port any of their LAPACK-relying software components and to take advantage of the new architectures. The transition from small tasks (of small block size) to large tasks is done in a recursive fashion where the intermediate for the transition tasks are executed in parallel using dynamic scheduling.

Apache Cassandra Apache Cassandra is an open source distributed database management system designed to handle large amounts of data across many commodity servers, providing high availability with no single point of failure. Cassandra offers robust support for clusters spanning multiple datacenters,[1] with asynchronous masterless replication allowing low latency operations for all clients. Cassandra also places a high value on performance. In 2012, University of Toronto researchers studying NoSQL systems concluded that "In terms of scalability, there is a clear winner throughout our experiments. Cassandra achieves the highest throughput for the maximum number of nodes in all experiments Tables may be created, dropped, and altered at runtime without blocking updates and queries.[6] History[edit] Releases after graduation include Licensing and support[edit] Apache Cassandra is an Apache Software Foundation project, so it has an Apache License (version 2.0). Main features[edit] Decentralized Scalability

BASH Programming - Introduction HOW-TO: Introduction Next Previous Contents 1. Introduction 1.1 Getting the latest version 1.2 Requisites Familiarity with GNU/Linux command lines, and familiarity with basic programming concepts is helpful. 1.3 Uses of this document This document tries to be useful in the following situations You have an idea about programming and you want to start coding some shell scripts. PyCUDA | Andreas Klöckner's web page PyCUDA lets you access Nvidia‘s CUDA parallel computation API from Python. Several wrappers of the CUDA API already exist–so what’s so special about PyCUDA? Object cleanup tied to lifetime of objects. This idiom, often called RAII in C++, makes it much easier to write correct, leak- and crash-free code. See the PyCUDA Documentation. If you’d like to get an impression what PyCUDA is being used for in the real world, head over to the PyCUDA showcase. Having trouble with PyCUDA? PyCUDA may be downloaded from its Python Package Index page or obtained directly from my source code repository by typing git clone --recursive You may also browse the source. Prerequisites: Boost (any recent version should work)CUDA (version 2.0 beta or newer)Numpy (version 1.0.4 or newer)

Amazon DynamoDB Overview[edit] DynamoDB differs from other Amazon services by allowing developers to purchase a service based on throughput, rather than storage. Although the database will not scale automatically, administrators can request more throughput and DynamoDB will spread the data and traffic over a number of servers using solid-state drives, allowing predictable performance.[1] It offers integration with Hadoop via Elastic MapReduce. In September 2013, Amazon made available a local development version of DynamoDB so developers can test DynamoDB-backed applications locally.[3] Language bindings[edit] References[edit] External links[edit]