VISION2050 FULLREPORT FINAL. How to Lead Big Change in a 100-Year-Old Organization  When Beth Ann Kaminkow was named CEO of TracyLocke, a 100-year-old creative agency that is a subsidiary of Omnicom, she found herself at the helm of a company with plenty of experience. 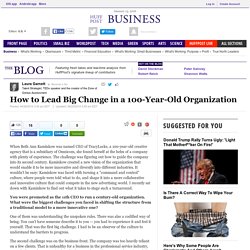 The challenge was figuring out how to guide the company into its second century. Kaminkow created a new vision of the organization that would enable it to be more innovative and diversify into different industries. It wouldn't be easy: Kaminkow was faced with turning a "command and control" culture, where people were told what to do, and shape it into a more collaborative and innovative culture that could compete in the new advertising world. I recently sat down with Kaminkow to find out what it takes to stage such a turnaround. You were promoted as the 11th CEO to run a century-old organization. A List Of Awesome Vision & Mission Statements. I recently wrote a piece on How To Write A Vision Statement and I’ve decided to keep a list of Vision/Mission Statement examples on this page. 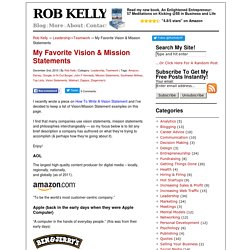 I find that many companies use vision statements, mission statements and philosophies interchangeably — so my focus below is to list any brief description a company has authored on what they’re trying to accomplish (& perhaps how they’re going about it). Enjoy! The largest high-quality content producer for digital media – locally, regionally, nationally, and globally (as of 2011). Building Your Company's Vision Jim Collins. 9107 The Strategic Importance of Vision Statements. How to Write a Vision Statement. In this article I will explain how to write a vision statement. 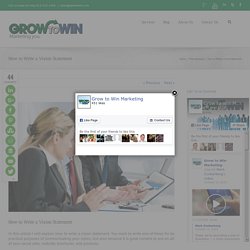 You want to write one of these for its practical purposes of communicating your vision, but also because it is great content to put on all of your social sites, website, brochures, and products. Two Main Components of a Vision Statement James Collins and Jerry Porras wrote an article in the Harvard Business Review about what should constitute a company vision. They assert that “A well-conceived vision consists of two major components: core ideology and envisioned future.” How to Write a Vision Statement. Revealed: Samsung's 100-year goal. Samsung Electronics’ President and CEO BK Yoon, who is in Dubai for The Government Summit 2015, has revealed the secret sauce that drives innovation and inspires best practices at the South Korean firm. 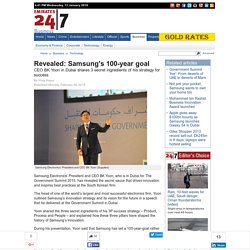 The head of one of the world’s largest and most successful electronics firm, Yoon outlined Samsung’s innovation strategy and its vision for the future in a speech that he delivered at the Government Summit in Dubai. Yoon shared the three secret ingredients of his 3P success strategy – Product, Process and People – and explained how these three pillars have shaped the history of Samsung’s innovation. Revealed: Samsung's 100-year goal. 7 core values statements that inspire. 10 Core Values: 1. 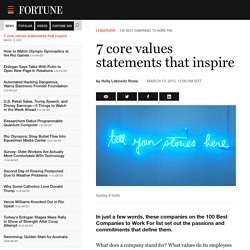 Deliver WOW Through Service 2. Embrace and Drive Change 3. 4. 5. 6. 7. 8. 9. 10. Employees at the online retailer Zappos.com aren’t expected to memorize the company’s 10 core values, which were incorporated in 2006 based on a list of 100 character traits circulated by CEO Tony Hsieh. How to Write a Vision Statement. 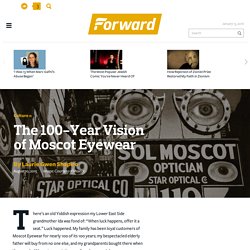 Luck happened. My family has been loyal customers of Moscot Eyewear for nearly 100 of its 100 years; my bespectacled elderly father will buy from no one else, and my grandparents bought there when they needed Moscot prescription reading glasses, as I do now. I was sitting at OST, a trendy new coffeehouse on my once very untrendy street, when an old Stuyvesant High School classmate walked in wearing hipster glasses. What the hell was Moss Lipow doing here? Moss, it turned out, had moved into an apartment one door down from where my grandmother (and babysitter) lived, a block away from me. Moss truly knew what the Lower East Side was like in the 1970s, back when Abe Beame was mayor, in the days when President Ford told bankrupt New York to, as the New York Daily News put it so gently, “drop dead.” In 1925, when Sol was 15, he became an optician. Toyota Preparing For ‘The Next 100 Years’ With Fuel Cell Vehicles. At this year’s New York Auto Show conventional vehicles were well represented, but quietly shouting its potential to one day usurp them all was Toyota’s Fuel Cell Vehicle Concept. 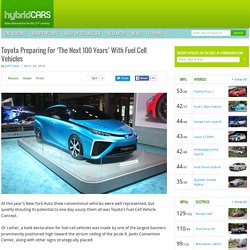 Or rather, a bold declaration for fuel cell vehicles was made by one of the largest banners prominently positioned high toward the atrium ceiling of the Jacob K. Javits Convention Center, along with other signs strategically placed: “Let’s go for a ride,” said Toyota’s message with a picture of the FCV Concept, “We’re setting the next 100 years in motion.” The next 100 years? The company that gave the world the Prius did show vision before, but it does not yet even have a fuel cell vehicle in production. As true today as it ever was, consumers are accustomed to – shall we politely say – exuberant marketing verbiage, but we asked Toyota, does it fully intend what this sign appears to imply? Essentially, Toyota says, the answer could be yes, no, or maybe. Fuel Cell Future Hyundai Tucson FCV.

Mandated By California. Vision framework. Harvard and HBS: The Next 100 Years - President Drew Faust. Overview (Faust) Over the past 100 years, Harvard Business School has strived to educate business leaders who make a difference in the world. 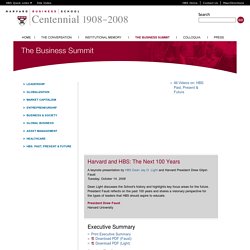 Such leaders are needed more than ever before. As Harvard Business School contemplates how to educate future business leaders, it should aspire to go beyond just teaching students to make a living or be the best at their professions; HBS must create leaders who have the vision, knowledge, skills, and leadership capabilities to "build cathedrals. " This entails educating leaders who make a difference not just in the world, but for the world. Context President Faust reflected on Harvard Business School's past 100 years and shared a visionary perspective for the types of leaders that the School should aspire to produce. Key Takeaways At this time of crisis, we must consider the lessons of the past as we confront the future. In light of the current financial crisis, the vision on which Harvard Business School was founded takes on a new urgency.

100 Years & Building:Steelcase CEO Guides Vision for Future - Corp! Magazine. By Karen Dybis July/August 2012 [VIDEO ALIGN="RIGHT" ID="aUI1UTm-L1I"]For Steelcase President and CEO James Hackett, there is nothing more nerve-racking than watching someone struggle to set up equipment for a business meeting. 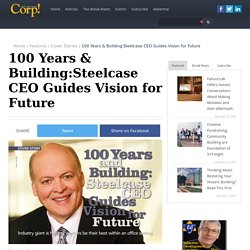 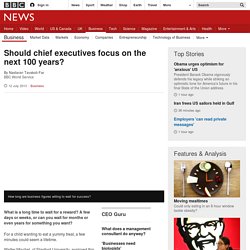 A few days or weeks, or can you wait for months or even years for something you want? For a child wanting to eat a yummy treat, a few minutes could seem a lifetime. Walter Mischel, of Stanford University, explored this in the 1960s with a series of experiments giving children marshmallows. His studies showed that children who were willing to forgo eating a marshmallow offered to them immediately in exchange for more marshmallows in a few minutes ended up becoming more successful in life. VISION2050 FULLREPORT FINAL. Daimler Vision: Is a globally.