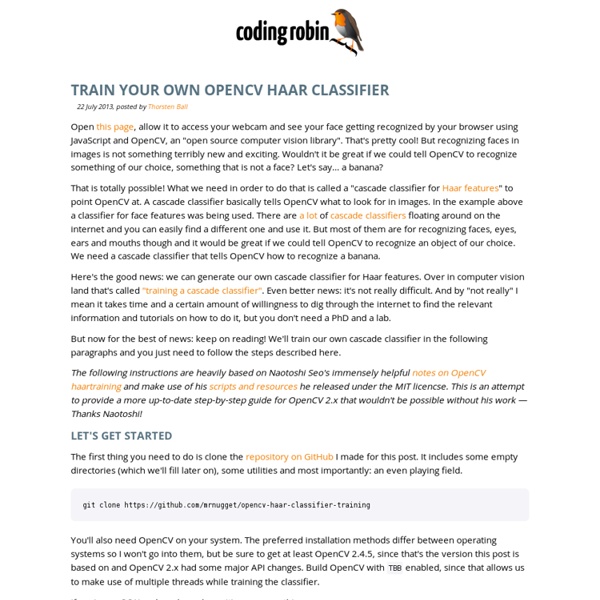 Open this page, allow it to access your webcam and see your face getting recognized by your browser using JavaScript and OpenCV, an "open source computer vision library". That's pretty cool! But recognizing faces in images is not something terribly new and exciting. Wouldn't it be great if we could tell OpenCV to recognize something of our choice, something that is not a face? Let's say... a banana? That is totally possible! Here's the good news: we can generate our own cascade classifier for Haar features. But now for the best of news: keep on reading! The following instructions are heavily based on Naotoshi Seo's immensely helpful notes on OpenCV haartraining and make use of his scripts and resources he released under the MIT licencse. Let's get started The first thing you need to do is clone the repository on GitHub I made for this post. git clone You'll also need OpenCV on your system. If you're on OS X and use homebrew it's as easy as this: Samples How many images do we need? find .

Cascade Classifier Goal In this tutorial you will learn how to: Use the CascadeClassifier class to detect objects in a video stream. Particularly, we will use the functions:load to load a .xml classifier file. It can be either a Haar or a LBP classiferdetectMultiScale to perform the detection. Training Haar Cascades For better or worse, most cell phones and digital cameras today can detect human faces, and, as seen in our previous post, it doesn’t take too much effort to get simple face detection code running on an Android phone (or any other platform), using OpenCV. This is all thanks to the Viola-Jones algorithm for face detection, using Haar-based cascade classifiers. There is lots of information about this online, but a very nice explanation can be found on the OpenCV website. (image by Greg Borenstein, shared under a CC BY-NC-SA 2.0 license) It’s basically a machine learning algorithm that uses a bunch of images of faces and non-faces to train a classifier that can later be used to detect faces in realtime.

Download - Adaptive Vision This page uses cookies. For details and possible settings refer to our Privacy Policy. Continuing to use this page means accepting the processing of cookie files. POL ENG GER 中文 Download If you want to try Adaptive Vision Studio or use it for non-commercial applications, please download the Lite edition: Bracelet - The Future is Now (A) These general website terms and conditions of use (hereinafter referred to as the “General Terms and Conditions”) set forth the terms and conditions applicable to the website (hereinafter referred to as the “Site”). (B) The Site is the exclusive property of CN2P (hereinafter referred to as the “Company”). (C) The purpose of the Site is to present the project developed by the Company (the “Project”) and to enable the collection of donations through the Site in order to finance the completion of the Company’s Project (the “Donations”).

Soft Cascade Classifier — OpenCV 2.4.9 Soft Cascade Classifier for Object Detection Cascade detectors have been shown to operate extremely rapidly, with high accuracy, and have important applications in different spheres. The initial goal for this cascade implementation was the fast and accurate pedestrian detector but it also useful in general. Soft cascade is trained with AdaBoost. But instead of training sequence of stages, the soft cascade is trained as a one long stage of T weak classifiers. Soft cascade is formulated as follows:

OpenCV 3 Image Thresholding and Segmentation Thresholding Thresholding is the simplest method of image segmentation. It is a non-linear operation that converts a gray-scale image into a binary image where the two levels are assigned to pixels that are below or above the specified threshold value. In other words, if pixel value is greater than a threshold value, it is assigned one value (may be white), else it is assigned another value (may be black). In OpenCV, we use cv2.threshold() function: cv2.threshold(src, thresh, maxval, type[, dst])

Install OpenCV and Python on your Raspberry Pi 2 and B+ My Raspberry Pi 2 just arrived in the mail yesterday, and man is this berry sweet. This tiny little PC packs a real punch with a 900mhz quadcore processor and 1gb of RAM. To give some perspective, the Raspberry Pi 2 is faster than the majority of the desktops in my high school computer lab. Anyway, since the announcement of the Raspberry Pi 2 I’ve been getting a lot of requests to provide detailed installation instructions for OpenCV and Python. 'Ninja Run' May Be the Craziest VR Locomotion Technique Yet This is ‘Ninja Run VR’, and its yet another take on the ever present problem of user locomotion in VR experiences. But, as crazy as the concept looks, there may be some method to its madness. The question of how best to allow users of VR apps, games and experiences to move around a virtual space is still a hot topic among players and developers.