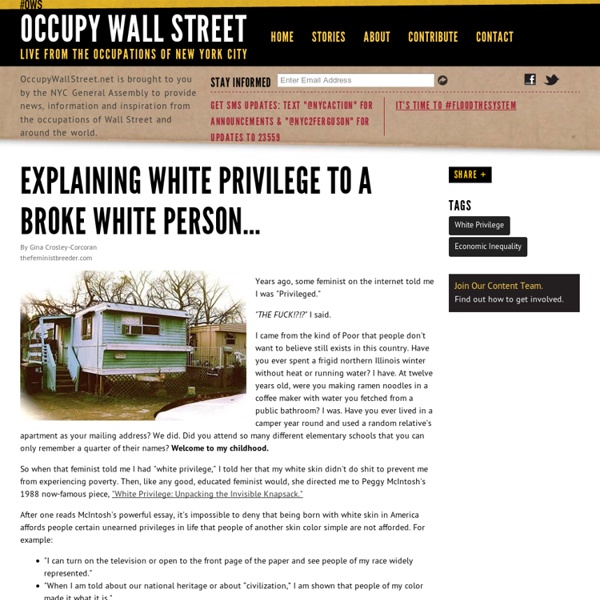 Years ago, some feminist on the internet told me I was "Privileged." "THE FUCK!?!?" I said. I came from the kind of Poor that people don't want to believe still exists in this country. Have you ever spent a frigid northern Illinois winter without heat or running water? I have. So when that feminist told me I had "white privilege," I told her that my white skin didn't do shit to prevent me from experiencing poverty. After one reads McIntosh's powerful essay, it's impossible to deny that being born with white skin in America affords people certain unearned privileges in life that people of another skin color simple are not afforded. "I can turn on the television or open to the front page of the paper and see people of my race widely represented."" If you read through the rest of the list, you can see how white people and people of color experience the world in two very different ways. I do understand McIntosh's essay may rub some people the wrong way. Related:  For Introduction to Sociology • class

The Marijuana Industry Alienates Black People and Benefits White Folks In 1992, Tupac famously said “instead of war on poverty, they got a war on drugs so the police can bother me.” The effects of the War on Drugs are still active and visible 25 years after the rapper called attention to this already decades old problem. Black people are nearly four times more likely to get arrested for marijuana possession than white people, despite marijuana usage being the same between the two groups. Like many of the public policies in the U.S., the policies around the prohibition of marijuana was racialized and relied on racist propaganda instead of factual, scientific research. Today, those same white women are benefitting heartily from the legal cannabis market. Related: PART TWO: BLACK-OWNED URBAN FARMS IN THE DMV Of the 3,200 to 3,600 marijuana dispensaries in the U.S., fewer than three dozen are Black-owned. The Hood Incubator Members of The Hood Incubator have access to monthly programming including community skill shares and legal workshops. District Growers

Respectability politics Respectability politics or the politics of respectability refers to attempts by marginalised groups to police their own members and show their social values as being continuous and compatible with mainstream values rather than challenging the mainstream for its failure to accept difference. The concept was first articulated by Evelyn Brooks Higginbotham in her book Righteous Discontent: The Women's Movement in the Black Baptist Church, 1880—1920. In the context of Black American history, respectability politics was practised as a way of attempting to consciously set aside and undermine cultural and moral practices thought to be disrespected by wider society, especially in the context of the family and good manners.[1] The development of African American politics of responsibility has been traced to writers and activists including W. E. B. Campaigners for gay rights have also struggled with the issue of respectability politics.

Why working-class sitcoms don't work Monty Brinton / CBS Mom should have been a sure thing. The new sitcom is a creation of Chuck Lorre, who already has three hit shows on the air; it stars former movie star Anna Faris. But while the show is hardly a flop, TV By the Numbers says its initial ratings make it “likely to be cancelled.” What makes this show different from Lorre’s The Big Bang Theory or Two and a Half Men? Veteran TV writer Ken Levine says in today’s TV industry, it’s conventional wisdom that “working-class sitcoms will seem too depressing.” But in sitcoms, not only do affluent people dominate the ratings, they also dominate the award-winners. Though some dramas, like Breaking Bad, deal with household problems such as medical bills, prestige comedies shy away from these issues: Comedian Louis CK bombed on HBO with Lucky Louie, about a family living in poverty, but became an award-winner for Louie, about the pressures of being a successful comedian. Why can’t comedies deal with people who aren’t affluent?

The dark side of Dubai - Johann Hari - Commentators The wide, smiling face of Sheikh Mohammed – the absolute ruler of Dubai – beams down on his creation. His image is displayed on every other building, sandwiched between the more familiar corporate rictuses of Ronald McDonald and Colonel Sanders. This man has sold Dubai to the world as the city of One Thousand and One Arabian Lights, a Shangri-La in the Middle East insulated from the dust-storms blasting across the region. But something has flickered in Sheikh Mohammed's smile. Once the manic burst of building has stopped and the whirlwind has slowed, the secrets of Dubai are slowly seeping out. I. Karen Andrews can't speak. Her story comes out in stutters, over four hours. All her worries melted when she touched down in Dubai in 2005. Her husband, Daniel, bought two properties. One doctor told him he had a year to live; another said it was benign and he'd be okay. "When we realised that, I sat Daniel down and told him: listen, we need to get out of here. She is not alone. II. III. IV.

CLASS & HOW IT IS REPRESENTED ON TELEVISION | Class Representation within Sitcoms Since 1950's Social class is categorized by individuals who occupy a similar position in the economic system within society. “These dimensions include power, wealth, social status, education level, prestige of one’s occupation, social standing, and many others” (Gabrenya 3). The portrayal of the working class within sitcoms has been underrepresented since the Golden Age of television. This blog is an exploration of the representation of the working-class on sitcoms since the 1950’s. 1950’s During this era, the standard of living for American citizens was increasing significantly because of the economic boom. Technological development had an impact on the consumerist mentality and female homemaker role. The luxurious middle-class high standard of living was not a reality for all Americans. Class representations that were relevant during the 1950’s revolved around the rise of white-collar jobs and relocation of families to the suburbs. The Honeymooners 1960’s 1970’s 1980’s

Why racism is so hard to define and even harder to understand Today, what can be defined as racism and what cannot has become a matter for debate. Every racist caught in the act, whether it be wrongly accusing a black child of sexual assault or running over and killing a mosque-goer, claims not to be racist. Eric Kaufmann, a prominent professor at a London university, has claimed that “racial self-interest is not racism”. He is joined by others who see talking about race as “unhelpful”, be that from a left-wing perspective that privileges class, or from a conservative one that ridicules “identity politics”. Black people, Indigenous people, people of colour, Muslims and Jews regularly report being lectured to on racism – and what constitutes racism – by people who have never experienced it. How did we get here? As Cheryl Harris explained in her landmark 1993 article, “Whiteness as Property”, white people in settler colonial countries such as the US and Australia have benefited directly from being white. Read more: Explainer: what is casual racism?

Why women get attacked by trolls: A new study unpacks the digital gender safe... Yesterday, Pew released its most recent research study on online harassment. Forty percent of 2,849 web users surveyed earlier this year reported experiencing online harassment, categorized as name calling, purposeful embarrassment, stalking, sexual harassment, physical threats and sustained harassment. Age and gender were the most consequential factors contributing to whether or not a person has been harassed. People between the ages of 18-29 were the most likely say they’d been harassed. The survey also revealed important differences between men’s and women’s descriptions of “harassment” and provided insight into the frustrations regularly articulated by women living with widespread hostility online. The survey found that, in general, men are more likely to experience online harassment, but they are experiencing less severe forms and significantly fewer emotional, personal or perceived reputations harms.

Ketchup sandwiches and other things stupid poor people eat I met this woman named Mae. She’s a van driver for a production company. She works 14-hour days but says she doesn’t mind, says she keeps one eye on the road and the other on the prize — a paycheck that has to last through the dead months. We’re driving through a poor stretch of Atlanta. Dirty streets. Old houses. We pass a decades-old Buick Skylark. “You into cars?” I’m not into cars, but my dad and I once abandoned one of those Buicks on the side of a Florida highway when I was a teenager. “I hear you,” she says. Mae’s voice is rich, melodic, it’s Maya Angelou meets Gladys Knight. Mae invites me to sit up front with her. “So her brothers drive corvettes?” “One each?” “Lord Almighty,” she says, “folks of privilege don’t understand how $17 can ruin you.” Mae tells me how she’d come home from school and her mother would hustle her and her sisters upstairs to pick out clothes for the next day before the utilities cut off. I was poor in Florida. “I hear you,” she says.

Concrete Examples of How Video Games Normalize Violence Against Women CLIP: Dragon Age: Origins “Grab a whore and have a good time” Welcome to the second part of our mini-series examining the Women as Background Decoration trope in video games. I need to stress that this video comes with a content warning and is not recommended for children. I define the Women as Background Decoration trope as: The subset of largely insignificant non-playable female characters whose sexuality or victimhood is exploited as a way to infuse edgy, gritty or racy flavoring into game worlds. In our last video we discussed the concept of Sexual Objectification and looked at a specific subset of non-essential female characters which I classify as Non-Playable Sex Objects. In this episode we will expand our discussion of the Women as Background Decoration trope to examine how sexualized female bodies often occupy a dual role as both sexual playthings and the perpetual victims of male violence. CLIP: Assassin’s Creed Brotherhood “Are you here for the whore?” “I gotta stop him now.”

Intergenerational Income Mobility: New Evidence from Canada by Wen-Hao Chen and Yuri Ostrovsky, Social Analysis and Modelling Division Patrizio Piraino, University of Cape Town, South Africa Release date: June 17, 2016 Correction date: (if required) Skip to text Text begins Start of text box This Economic Insights article examines the extent to which the lifetime income of children is correlated with the lifetime income of their fathers—a topic known as intergenerational income mobility. End of text box Social mobility is often seen as a broad measure of equality of opportunity. A simple yet intuitive way to measure social mobility is to look at intergenerational income elasticity (IGE). This study re-examines intergenerational earnings and income mobility in Canada using an updated version of the Intergenerational Income Database (IID). Canadians are mobile, but not to the same extent as previously suggested The degree of intergenerational persistence tends to be greater when market income and total income are measured. Conclusion References Chen, W.

'BlacKkKlansman' Shows How White Supremacists Make Language Into a Weapon The opening scenes of Spike Lee’s new movie, BlacKkKlansman, are in black and white. The movie is a period piece based on the true story of a black man, Ron Stallworth (played in the film by John David Washington), who became the Colorado Springs Police Department’s first black officer in 1972 and then successfully infiltrated the city’s local Ku Klux Klan chapter in an elaborate sting operation. But this black and white imagery is an effect Lee is using to create the illusion of film from an even earlier era. A conspicuously squarely-dressed man named Dr. Kennebrew Beauregard (Alec Baldwin) appears in front of images of D.W.Griffith’s epically racist black and white film Birth of a Nation, practically foaming at the mouth with concern like the narrator in anti-marijuana propaganda film Reefer Madness — only this time the warnings are about Jewish and black Americans who he believes are turning America into a “mongrel” nation.