How Not to Be a Leader — Bad Words. Whether it’s the rise of the extreme right in Europe, Donald Trump’s ascent in the US, Canada’s stunning plunge into fringe politics, the world is awash in a new political phenomenon: a tsunami of vocal, angry extremism, where once placid waters calmly shimmered. 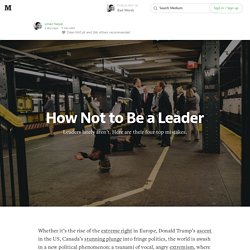 Not extreme enough for you? Hacking Through Amazon’s Jungle of Coverage. Microsoft Needs To Launch Xbox One Slim To Keep Up With PlayStation 4's Dominance. With the state the Xbox One is in right now, it would seem software maker Microsoft may have to consider launching the slim version of the console very soon to keep up with Sony and the PlayStation 4. 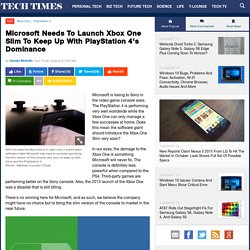 (Photo : Matthew Cunnelly | Flickr) Microsoft is losing to Sony in the video game console wars. The PlayStation 4 is performing very well worldwide while the Xbox One can only manage a few successes at home. Does this mean the software giant should introduce the Xbox One Slim very soon? In our eyes, the damage to the Xbox One is something Microsoft will never fix. There's no winning here for Microsoft, and as such, we believe the company might have no choice but to bring the slim version of the console to market in the near future. Price tag: The settler movement Israeli police think just burned a Palestinian child alive. 18-month-old Palestinian infant Ali Dawabsheh was burned to death in an attack on his home in the West Bank Thursday night. 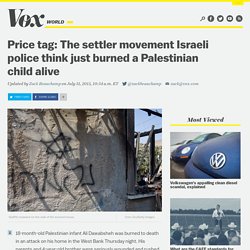 His parents and 4-year-old brother were seriously wounded and rushed to a hospital.The perpetrators are almost certainly Jewish terrorists: A star of David and the word "revenge," in Hebrew, were graffitied on the burnt house.On-scene evidence points to an attack by the "price tag" movement, according to Israeli police spokesperson Luba Samri.

"Price tag" is a loose movement of Israeli settlers who attack Palestinian and Israeli Defense Forces property, meant to impose a retaliatory "price" for any effort to roll back Jewish settlements in the West Bank. What Big Medicine Can Learn from the Cheesecake Factory. It was Saturday night, and I was at the local Cheesecake Factory with my two teen-age daughters and three of their friends. 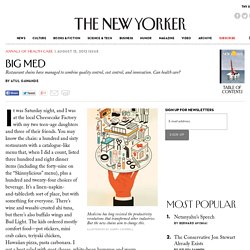 You may know the chain: a hundred and sixty restaurants with a catalogue-like menu that, when I did a count, listed three hundred and eight dinner items (including the forty-nine on the “Skinnylicious” menu), plus a hundred and twenty-four choices of beverage. It’s a linen-napkin-and-tablecloth sort of place, but with something for everyone. There’s wine and wasabi-crusted ahi tuna, but there’s also buffalo wings and Bud Light. The kids ordered mostly comfort food—pot stickers, mini crab cakes, teriyaki chicken, Hawaiian pizza, pasta carbonara. I got a beet salad with goat cheese, white-bean hummus and warm flatbread, and the miso salmon.

Explaining White Privilege to a Broke White Person... Years ago, some feminist on the internet told me I was "Privileged. 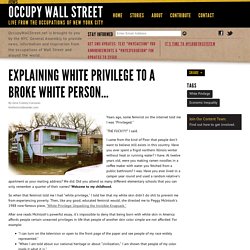 " "THE FUCK!?!? " I said. I came from the kind of Poor that people don't want to believe still exists in this country. Have you ever spent a frigid northern Illinois winter without heat or running water? Why We Love to Hate HR…and What HR Can Do About It. Recent complaints about the HR function have touched a nerve in a large, sympathetic audience, particularly in the United States. 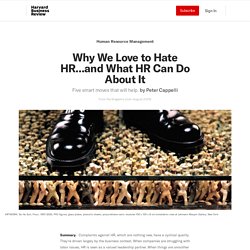 The 15 Diseases of Leadership, According to Pope Francis. Helen Rosner: On Chicken Tenders. This Is Why Your Boyfriend Eats Faster Than You. When you go out to eat with a group—or even just your parents, or a boyfriend—a peculiar pattern often emerges that may not always notice. 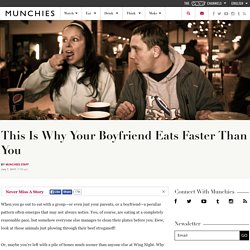 You, of course, are eating at a completely reasonable pace, but somehow everyone else manages to clean their plates before you. Korean Honey Butter Chip Hysteria Has Created a Snack Black Market. Whether it be the mass explosion of the selfie stick (which has led to governmental regulations and even penalties for those caught owning or selling unregistered sticks) or the strange Spam gift sets that pervade the nation during the holidays, South Korea’s collectivist instinct can be a powerful phenomena when combined with the nation’s enthusiastic consumerism. 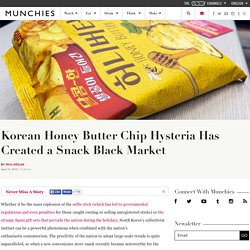 The proclivity of the nation to adopt large-scale trends is quite unparalleled, so when a new convenience store snack recently became noteworthy for the mania it stirred around Seoul, with abundant rumors about the impossibility of procuring a bag of said chips, my interest was piqued. In August of 2014, Haetae Confectionary & Foods Co., along with Japanese snack food enterprise Calbee Inc., introduced the hottest junk food to hit the Korean peninsula this millennium: Honey Butter Chips. Religion in China: A Young Person’s Game - China Real Time Report. In South Korea, Spam Is the Stuff Gifts Are Made Of.

South Korea Prison For Selfie Sticks - Business Insider. Dissecting The Human Genome: Are Humans And Chimps As Genetically Close As You Think? As human beings’ collective love of science continues to grow, our knowledge of the theory of evolution may lead us to believe that we are 99 percent made up of DNA that is identical to chimpanzees. 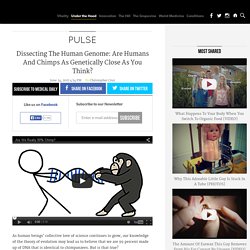 But is that true? This video deconstructs that belief. If you were to put a scroll of our DNA next to a chimpanzee’s, they wouldn’t sync as neatly as some might think they would. In the last six to eight million years, when we split from our common ancestor, genetic mutations and natural selection have changed our genomes in radical ways. “Yes, we share 99 percent of our DNA with chimps — if we ignore 18 percent of their genome and 25 percent of ours. Counting up the changes in DNA doesn’t always tell us how similar or different two creatures are. Men And Women Most Likely To Disagree On Whether Porn Is Morally Acceptable. It’s not having sex in the morning versus at night, or anything having to do with foreplay. 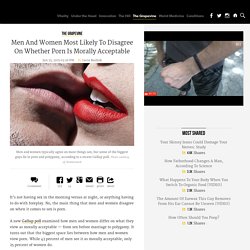 Old English Remedy Successfully Kills Antibiotic-Resistant Staph Bacteria. Quantum Technology Probes Ultimate Limits of Vision. Blue Zones: What the Longest-Lived People Eat (Hint: It&#8217;s Not Steak Dinners) - Food Matters - Scientific American Blog Network. Photo by Gianluca Colla, Courtesy Blue Zones. The Dark Side of the App Store. Something great happened on July 10, 2008. The Apple App Store was born. Only six years down the road more than 60 billion apps were downloaded through the platform, making it one of the largest stores in history. As Apple & Google are about to launch their app stores for the largest untapped screen in our homes, it’s worth pausing for a moment to address its dark side and understand the magnitude of its impact on our lives.

Is Apple the Supreme Court of our digital lives? Risky business - The Science Show. But where are the jobs? - Ockham's Razor.