Introduction to programming with OpenCV 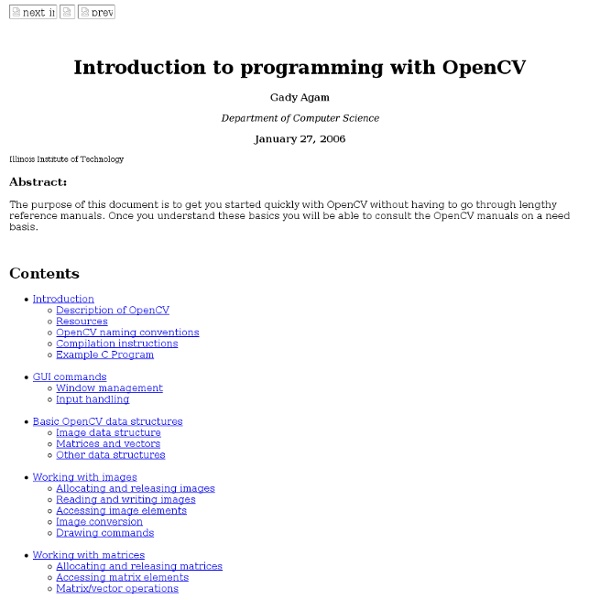 Accentuate.us: Machine Learning for Complex Language Entry Editors note: We’d like to invite people with interesting machine learning and data analysis applications to explain the techniques that are working for them in the real world on real data. Accentuate.us is an open-source browser addon that uses machine learning techniques to make it easier for people around the world to communicate. Authors: Kevin Scannell and Michael Schade Many languages around the world use the familiar Latin alphabet (A-Z), but in order to represent the sounds of the language accurately, their writing systems employ diacritical marks and other special characters. For example: Vietnamese (Mọi người đều có quyền tự do ngôn luận và bầy tỏ quan điểm),Hawaiian (Ua noa i nā kānaka apau ke kūʻokoʻa o ka manaʻo a me ka hōʻike ʻana i ka manaʻo),Ewe (Amesiame kpɔ mɔ abu tame le eɖokui si eye wòaɖe eƒe susu agblɔ faa mɔxexe manɔmee),and hundreds of others. It is easiest to describe our algorithm with an example.

Computing Your Skill Summary: I describe how the TrueSkill algorithm works using concepts you’re already familiar with. TrueSkill is used on Xbox Live to rank and match players and it serves as a great way to understand how statistical machine learning is actually applied today. I’ve also created an open source project where I implemented TrueSkill three different times in increasing complexity and capability. Introduction It seemed easy enough: I wanted to create a database to track the skill levels of my coworkers in chess and foosball. But, there’s a problem. Machine learning is a hot area in Computer Science— but it’s intimidating. “Not knowing something doesn’t mean you’re dumb— it just means you don’t know it.” I learned that the problem isn’t the difficulty of the ideas themselves, but rather that the ideas make too big of a jump from the math that we typically learn in school. Skill ≈ Probability of Winning Skill is tricky to measure. The key idea is that a single skill number is meaningless. See?

Evolving Objects (EO): Evolutionary Computation Framework Theory | food-bot.com And so I set out to solve the ultimate problem, a problem that, if solved effectively, could revolutionize the lives of thousands of college students across the country. As I began formalizing and exploring the problem, I realized it is far less simple than it might first appear, and not unlike a famous challenging problem in computer science. This page explains various aspects of the free food problem as well as various strategies for solving it. problem statement Given an arbitrary document, d, determine whether d contains information about a free food event, and if so, return an array of correctly-associated information about each event (date/time, location, and food type). An important aspect of this problem is the correct classification of an arbitrary document as either free food or non-free food. My solution uses basic ideas from AI, especially the idea of Maximum Likelihood Estimation. Let: = Free Food category = Non-Free Food category = number of documents used in training And so: