How to tell if someone is telling a lie or lying: Viewzone 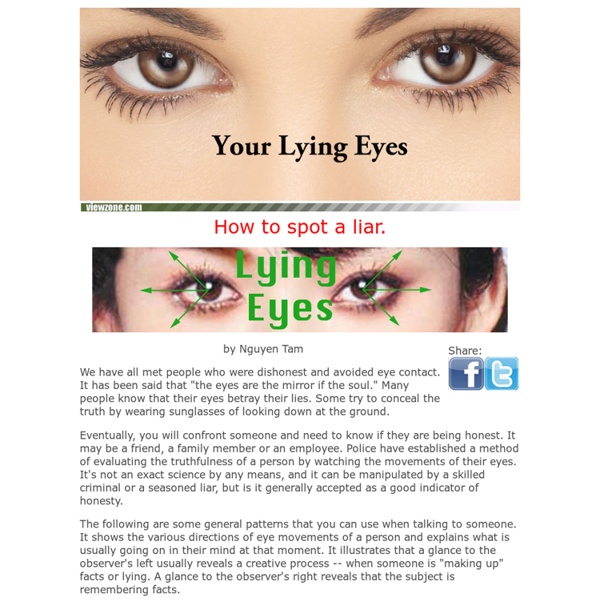 Best Foods and Vitamins For Healthy Eyes And Preventing Cataracts Photo credit: bigstock.com Our eyesight is one of our most important senses, yet, most of us take it for granted. It is only after we develop problems with our eyesight that we think of how to best care for it. Although the exact cause of cataracts is still unknown research has suggested that free radicals, sometimes called oxidation, is to blame. Oxidation has been shown to be at the root cause of every degenerative disease known to mankind including heart disease, cancer, and cataracts. Think of your eyes as eggs. If free radicals are the bad guys then think of antioxidants as the good guys in the white hats. Studies show that persons who have low levels of antioxidants in their bodies are at a much greater risk of developing cataracts. Although cataracts used to be considered a disease of the elderly, more and more young people are developing this type of blindness due to very unhealthy diets and lifestyle habits. Continue to Page 2 1. 2. 3. Continue to Page 3 4. 5. 6. References: Aoa.org

Xavier Thoughts: Recognizing Threats A couple of weeks ago I wrote a post on the realities of surviving a gunfight. Much of my writing focused on the need to avoid the conflict. Many believe that they can avoid conflict by avoiding particular areas. This is not always the case. A person must go about one's life, and the criminal element does the same. A person may be more likely to be attacked in certain areas, but they can be victimized virtually anywhere. To recognize threats, one has to understand how the criminal mind works. IntentThis is when the criminal decides to commit a crime. He has decided to go to work. SelectionThe criminal, once he has observed a potential victim, will send out some test runs to determine if the person is indeed prey, or predator. The predator is mimicking a common panhandler to get in close, test the waters and position himself for attack. The most feared predator is the one who uses the silent selection process. PositioningThe final indicator of an impending attack is positioning.

The 20 Essential TED Talks for New Grads May 25th, 2011 Moving from the relatively sheltered world of the college campus into work and independence can be a very exciting, though sometimes rough, transition. New grads will be facing a host of new challenges testing the lessons they learned in school, both academic and personal. Nigel Marsh: How to make work-life balance work: If you thought it was hard to balance schoolwork with your personal life in college, things won’t get any easier when you’ve landed a fulltime job.

6 Sure-Fire Tips to Prevent Glaucoma Naturally by Dr. Mercola Glaucoma is the second leading cause of blindness in the world, and belongs to a group of eye diseases that damage your optic nerve, leading to vision loss. In its early stages, glaucoma may produce no symptoms at all, and it’s estimated that half of the more than 4 million Americans with glaucoma do not even realize they have it.[1] Because the vision loss caused by glaucoma comes on so gradually, it is sometimes called the “silent thief of sight.” This is why it’s so important to take steps now to help protect your vision, even if your eyesight is normal. What Causes Glaucoma? The underlying causes of glaucoma are not completely understood, but typically the damage it does to your optic nerve is related to increased pressure in your eye. In a healthy eye, the fluid is regularly drained, however in those with glaucoma the drainage system doesn’t work properly, so the fluid gradually builds up in your eye, causing increased pressure. Who is at Risk? The top two steps are:

5 Hard Truths That Are Actually Quite Liberating We humans, but especially we Americans, believe in self-improvement. God bless us, we do. We believe in better, faster, thinner. We believe in six-pack abs. We believe in firm and tight. We believe in second and third chances. God bless us, we try. As a writer, I fail way more than I succeed. But we keep trying. I know whereof I speak. A few weeks ago, when my family moved, I had the opportunity to go through these boxes. As I write this, I am sitting in my new house. Lately, I’ve been trying hard not to try so hard. I know, I know, I’m still preaching self-improvement, but I see it as a different kind—a radical and mindful acceptance of reality. The following five doses of reality may sound negative, but the catch is, they’re not; they’re actually liberating. 1. Some days it seems that everyone in the world is writing a book or making a film or recording an album or trying to make it as an actor. 2. It’s important to set goals and to try our best. 3. So many of us need to feel special.

Twilight language Twilight language is a rendering of the Sanskrit term sāṃdhyābhāṣā (written also sāndhyābhāṣā, sāṃdhyabhāṣā, sāndhyabhāṣā; Wylie: dgongs-pa'i skad, THL gongpé ké) or of their modern Indic equivalents (especially in Bengali, Odia, Assamese, Maithili, Hindi, Nepali, Braj Bhasha and Khariboli). As popularized by Roderick Bucknell and Martin Stuart-Fox in The Twilight Language: Explorations in Buddhist Meditation and Symbolism in 1986, the notion of "twilight language" is a supposed polysemic language and communication system associated with tantric traditions in Vajrayana Buddhism and Hinduism. It includes visual communication, verbal communication and nonverbal communication. Tantric texts are often written in a form of the twilight language that is incomprehensible to the uninitiated reader. The phrase "twilight language" has subsequently been adopted by some other Western writers. Usage[edit] In the Vajrayana tradition[edit] As Bucknell and Stuart-Fox state: In the Pali Canon[edit]

30 Challenges for 30 Days Did you know that it takes 30 days to form a new habit? The first few days are similar as to how you would imagine the birth of a new river. Full of enthusiasm it gushes forth, only to be met by strong obstacles. The path is not clear yet, and your surroundings don’t agree. Old habits urge you to stay the same. So, take a moment to reflect on the question ‘Who do I want to be in 5 years?’ Check out this short TED talk first to get inspired: Now pick one or more challenges and stick with them! However, be cautioned, picking too many challenges at the same time can easily result in a failure of all of them. #1 Write a I-Like-This-About-You note/text/email each day for someone (Easy) This is the perfect way to let someone else know you care. #2 Talk to one stranger each day (Hard) This is a great one to cure approaching anxiety. #3 Take one picture each day (Hard) This one gets harder nearing the end of the challenge because at one point you will run out of the easy shots. We recommend:

Are There Foods That Naturally Treat Glaucoma? Glaucoma is an eye disease that can lead to blindness. As of 2011, there is no cure for glaucoma, but certain foods may be helpful. The Glaucoma Research Foundation states it is reasonable to assume what you eat and drink may have an effect on the disease. Glaucoma results from increased pressure within the eye, which damages the optic nerve over time, according to the Glaucoma Foundation. Spinach may be helpful for glaucoma because it contains high amounts of the antioxidants lutein and zeaxanthin. Some herbs, which can be added to foods or consumed as teas, may be helpful for glaucoma. The Glaucoma Research Foundation advises limiting caffeine if you have glaucoma since too much caffeine may elevate eye pressure temporarily. LIVESTRONG.COM Most Popular

10 Hilariously Outdated Instructional FIlms - Listverse Pop Culture The 1950s and 1960s—it was a simpler time in America, when the men brought home the bacon and the women knew their place. That doesn’t mean there were no dangers lurking . . . dangers like not knowing how to properly stir a cake, how to help your hardworking husband relax, or how to deal with those pesky women who thought they belonged out in the workplace. Fortunately, these informational short films were made to teach young people everything they needed to know in order to navigate the high-demand world of the ’50s and ’60s. 10The Relaxed Wife1957 If this doesn’t illustrate the difference between the hardworking, stressed man with the weight of the world on his shoulders and the relaxed housewife with not a care in the world, nothing does. She has all sorts of stressful things to deal with, too, like children and doing laundry, but she knows how to let the world’s problems take care of themselves. 9Boys Beware1961 By then, it was almost too late for Jimmy. 6Snap Out Of It!

The Secret History of Secret Societies Given the vast number of cults and sub-cults, Parfrey knew his research would be surprising to many. "Despite the success of Joseph Campbell's PBS series a couple decades ago, what good American thinks he's practicing 'rites' or 'rituals?'" Parfrey asks. "These words are thought to refer to what primitives do in foreign lands." Ritual America shows that hundreds of ritualistic oaths and procedures are practiced behind the doors of lodges and clubs, even today. Parfrey defines a "secret society" as a social group that demands an oath of allegiance to join. Researching the book was eye-opening (and, fittingly, the cover illustration is the so-called "eye of providence"). Parfrey says his primary source was Albert C. The question of who gets admitted to these groups recurs as a theme through history.

Cataract Removal without Surgery | Out of the Box Remedies An innovative new method now exists to get rid of cataracts by simply applying a special type of eye drops containing N-Acetyl-L-Carnosine, which Out of the Box Remedies calls Cataract Terminator drops, enabling cataract removal without surgery. What are Cataracts? A cataract is a cloudy area within the lens of the eye, causing blurry or hazy vision. Cataracts are the accumulation of Advanced Glycation End products (AGEs) within the lens of the eye. Glycation is the bonding of a protein or fat molecule with sugar. Thus, diabetics or anyone ingesting excessive sugar and/or bad oils is more prone to having cataracts. Dangers of Cataract Surgery Until recently, surgery was the only option for removing cataracts. Cataract surgery During most cataract operations, the lens of the eye is replaced by an artificial intraocular lens implant (IOL). Cataract surgery is said to be a highly successful operation, yet one patient in ten still has complications. Advantages of Cataract Terminator Drops