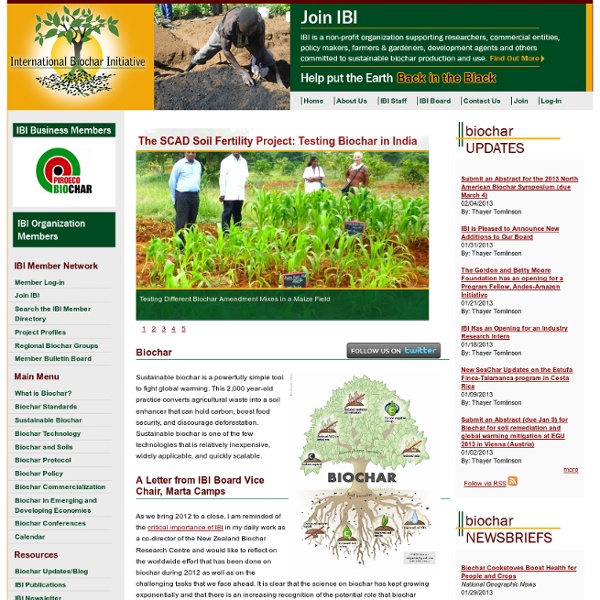 Biochar Sustainable biochar is a powerfully simple tool to fight global warming. This 2,000 year-old practice converts agricultural waste into a soil enhancer that can hold carbon, boost food security, and discourage deforestation. Sustainable biochar is one of the few technologies that is relatively inexpensive, widely applicable, and quickly scalable. Biochar is a solid material obtained from the carbonisation of biomass. Biochar may be added to soils with the intention to improve soil functions and to reduce emissions from biomass that would otherwise naturally degrade to greenhouse gases.

Biochar Biochar created through the pyrolysis process. History[edit] Left - a nutrient-poor oxisol; right - an oxisol transformed into fertile terra preta using biochar Pre-Columbian Amazonians are believed to have used biochar to enhance soil productivity. They produced it by smoldering agricultural waste (i.e., covering burning biomass with soil)[5] in pits or trenches.[6] European settlers called it terra preta de Indio.[7] Following observations and experiments, a research team working in French Guiana hypothesized that the Amazonian earthworm Pontoscolex corethrurus was the main agent of fine powdering and incorporation of charcoal debris to the mineral soil.[8] The term “biochar” was coined by Peter Read to describe charcoal used as a soil improvement.[9]

Make Biochar — This Ancient Technique Will Improve Your Soil Last year, I committed one of the great sins of gardening: I let weeds go to seed. Cleaning up in fall, I faced down a ton of seed-bearing foxtail, burdock and crabgrass. Sure, I could compost it hot to steam the weed seeds to death, but instead I decided to try something different. I dug a ditch, added the weeds and lots of woody prunings, and burned it into biochar, thus practicing a “new” soil-building technique that’s at least 3,000 years old. Soil An important factor influencing the productivity of our planet's various ecosystems is the nature of their soils. Soils are vital for the existence of many forms of life that have evolved on our planet. For example, soils provide vascular plants with a medium for growth and supply these organisms with most of their nutritional requirements. Further, the nutrient status of ecosystem's soils not only limit both plant growth, but also the productivity of consumer type organisms further down the food chain.

How to Improve Garden Soil With Charcoal If you want to raise rich, lush flowers and vegetables in your garden, adding charcoal to the soil is a simple and effective method. There are many reasons to add charcoal to your garden, including raising the soil’s pH, improving air circulation and increasing the soil’s ability to retain water and nutrients. Once added, the benefits of charcoal continue for years. Should you decide to sell your home, the charcoal-aided garden can help it stand out from neighboring yards. If you don’t plan on moving, each year you can enjoy the benefits that this simple measure brings.

Soil Soil is the mixture of minerals, organic matter, gases, liquids and a myriad of micro- and macro- organisms that can support plant life. It is a natural body that exists as part of the pedosphere and it performs four important functions: it is a medium for plant growth; it is a means of water storage, supply and purification; it is a modifier of the atmosphere; and it is a habitat for organisms that take part in decomposition and creation of a habitat for other organisms. Soil is considered the "skin of the earth" with interfaces between the lithosphere, hydrosphere, atmosphere, and biosphere.[1] Soil consists of a solid phase (minerals & organic matter) as well as a porous phase that holds gases and water.[2][3][4] Accordingly, soils are often treated as a three-state system.[5] Overview[edit] Soil is a major component of the Earth's ecosystem. Soils can effectively remove impurities, kill disease agents, and degrade contaminants.

Tree Encyclopedia Trees have three principle features that distinguish them from all other plants. First, they have a woody stem, roots and branches which do not die back in winter, but continue to grow year after year. From the moment of its germination, a tree remains visible; from the tallest Sequoia to the smallest garden fruit tree, this principle of growth remains constant. Trees live longer than any other organism on earth.

BIOCHAR – Wydział Inżynierii Produkcji i Logistyki About biochar - BIOCHAR - Wydział Inżynierii Produkcji i Logistyki Biochar is a carbon product (as charcoal) produced from the organic waste in the process of pyrolysis. Currently, a range of biochar-related research are being conducted worldwide. Moreover, a number of companies and non-profit organizations related to this topic have been established. Research areas focused on biochar can generally be divided into three groups: Soil Structure & Composition Sunday, 06 June 2010 07:35 The Plant Lady Living Matter Mostly in the top 4" of the soil. Good guys & bad guys...but large volume & diversity control the trouble makers by making it a competive environment for resources. 1 teaspoon of soil: