30 things you should never compost or recycle 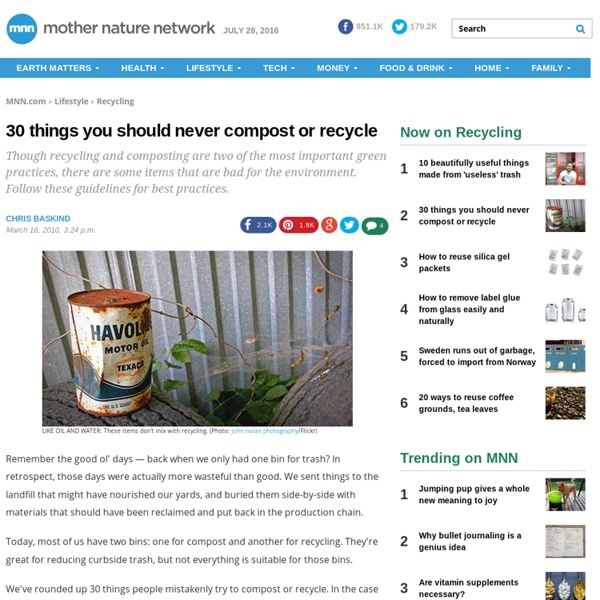 Remember the good ol' days — back when we only had one bin for trash? In retrospect, those days were actually more wasteful than good. We sent things to the landfill that might have nourished our yards, and buried them side-by-side with materials that should have been reclaimed and put back in the production chain. Today, most of us have two bins: one for compost and another for recycling. They're great for reducing curbside trash, but not everything is suitable for those bins. We've rounded up 30 things people mistakenly try to compost or recycle. Bread products: This includes cakes, pasta and most baked goods. Cooking oil: Smells like food to animal and insect visitors. Diseased plants: Trash them, instead. Heavily coated or printed paper: This is a long list, including magazines, catalogs, printed cards and most printed or metallic wrapping paper. Human or animal feces: Too much of a health risk. Meat products: This includes bones, blood, fish and animal fats. Sawdust: So tempting. Related:  Compost

How to Make Compost Compost is the ultimate ingredient for building fertile soil. If everyone composted their kitchen and garden waste, the world would be a cleaner place, and we would all enjoy more productive organic gardens. Some folks are intimidated by this unfamiliar and seemingly mysterious process — but have no fear! Composting is so worth the effort. Compost also vastly improves soil structure, allows the soil to hold in moisture better and improves friability (workability). After surveying hundreds of MOTHER EARTH NEWS readers and checking out what our Facebook community had to say during Compost Awareness Week 2012, we were blown away by the many answers to the question of how to make compost at home. Many households compost using multiple methods, and the techniques described here are a distillation of strategies employed by MOTHER EARTH NEWS readers. Composting Techniques “To keep from feeding critters, our kitchen waste first goes into three black compost containers until unrecognizable.

Composting Techniques for Anyone Compost bins can be made of repurposed materials, like these pallets. Composting doesn’t have to be difficult, nor does it require a strong back, large acreage, livestock waste or expensive bins. Even apartment-dwellers or those with physical limitations can put their kitchen waste to work. The easiest method of using kitchen waste and thin paper goods is to bury them. If digging is out of the question, use your blender. The next step up is cold composting, which is throwing your biodegradable waste into a stationary, closed compost bin. If your compost bin is a tumbler, meaning that the barrel that holds the compost can be externally turned, then you should have hot compost. The next, more difficult type of composting requires a shovel. Then there is the three-bin composting technique, which requires regular turning. Besides being a little taxing on the back, this method of composting, or any open-air method, releases methane into the atmosphere which contributes to global warming.

Screen Compost Now to Make Your Own Seed Compost for Spring If you make a plentiful supply of good compost, you can screen it to remove large particles and be self-sufficient in seedling and potting compost. In the summer months, compost piles work fast. If you can set aside some time before cold weather to screen the amount of compost you will need for seedlings in the spring, you can then have unfrozen compost ready to use when you need it in January or February. Even better, if you put the screened compost into some kind of bin, bed or box in your greenhouse, you can transplant lettuce into it, and the watering to keep the lettuce growing will help the compost organisms to mellow out the compost over the winter. Worm eggs will hatch out, the lettuce roots will make air channels throughout the bin, and you can harvest the lettuce before you need to sow seedlings. Making Compost Screens There are two basic styles of compost screen. To make a flat compost screen, cut two sets of battens and make two frames that will sit on top of a wheelbarrow.

Build a Worm Tower To Spread Compost Over Your Garden A worm tower not only enables worms do their work at composting, but it also helps them spread out and distribute the compost in your tank garden. This is such a low maintenance way of keeping nutrients cycling in your garden, and easy to put together. All you'll need is a 3 or 4 foot piece of PVC piping (or a 12" concrete pipe) and a flower pot. According to Ecofilms, be sure to use a food grade PVC pipe to avoid any chemical contamination - and the concrete pipe often works best. Once you've got your pipe, the next step is to bury the tower half way down in your garden with half of the pipe sticking out the top. Then, add some manure, compost worms (it's important to use compost worms), and secure with a flower pot lid. via Eco Films

Composting 101 for citydwellers | Page 4 As Tom Philpott wrote in the introductory essay to Grist’s Feeding the City series, urban agriculture took a huge hit once combustible-fuel machines replaced horses — and horse manure — as the vehicle of choice in cities. Farms need fertilizer, and it’s more efficient to grow where the sources of it live and poop. However, every day city dwellers throw away huge amounts of organic matter that could be turned into that precious material — through composting. Yard trimmings and food scraps make up 26 percent of U.S. waste, and once this organic matter hits the landfill, it breaks down slowly due to lack of air: your farmers-market tomato can produce methane, a deadly greenhouse gas, in a not-so-green afterlife. If you’re going to all the trouble to eat locally grown, organic vegetables, it’s rather a shame to truck their remains away to landfill prison when you could be feeding them back to the earth. So why aren’t you composting yet? First, you need to know the basics. Municipal composting

Potholes & Pantyhose | DIY Spinning Composter This year was my first year for a full-fledged garden. I consider it full-fledged because it produced enough to not only feed Biceps and I, but it also allowed me to dehydrate, freeze and give-away the excess. To be honest, I was just happy that anything sprouted from the earth. I give props to the composted kitchen and yard waste that we added to the soil-this garden seemed to outperform many of my neighbors’ gardens. (Here’s my video for my DIY Spinning Composter.) Here’s what you’ll need for your very own composter (The store bought materials can all be found at Lowe’s): Here are the tools you will need to complete the project: Square Skill Saw with wood blade Drill with 5/16″ drill bit, hole saw slightly bigger than your galvanized pipe/closet rod Fine grit sandpaper Chop Saw Old screen from window Tins Snips to cut screen Flat head & Phillips head screwdriver Hammer Let’s get started! Determine which end is up for you and your barrel. Pre-drill the holes for the hinges and the latch.

How To Compost Like A Boss If you are a newbie to composting and struggle to wrap your head around exactly how to make a compost pile, then here’s a ‘how to’ graphic that shows you how to compost. When I first started a compost pile I completely botched the greens/browns ratio, resulting in a pile that took over a year to compost. It is my hope that this visual guide helps your first compost pile turn into a success, so that you can start successfully increasing the fertility of your garden soils. Click On The Graphic To Enlarge Feel free to share on your site by copy and pasting the code below: <p align="center"><a href=" alt="How To Compost" src=" /></a></p><p align="center">How To Compost Brought To You By: <a href="

3 Composting Techniques Everyone Should Know We all know by now that composting is important to the environment. It allows natural waste to return to the earth, while adding a nutrient rich material to our gardens. Here is a break down of the top 3 most common techniques for composting for the home gardener. Hot Composting – Open Bins Hot composting is the most intensive method, but also the fastest way to get finished compost. It involves building compost piles that have a balance of green material (nitrogen), oxygen, water and brown material. Build or buy three, side by side compost bins. Bin #1 will be for brown materials…kind of a holding area for things you want to compost. Bin #2 is where all the action happens. The benefits to having the three bin system is that you can continue to collect brown materials during the season in bin #1, and that once you move the compost to bin #3 to settle, you can start over again with a new compost pile. Hot Composting – Closed Bins or Tumblers That’s it!

6 Main Reasons Compost Piles Fail, and What to do | Rural Spin There are six common reasons why compost piles fail, but solutions are relatively easy to accomplish. Anyone who has read about gardening knows that compost is a good thing. Compost provides and holds essential nutrients for plant growth, improves soil structure, helps retain water and improve soil aeration, and it attracts beneficial microorganisms to the soil. But sometimes even the experienced gardener may experience what I call “compost fail.” Symptoms of compost fail include material that never decomposes, a pile that stinks, or a pile that attracts vermin. Here are common reasons why compost piles fail to produce the black gold you’re striving for, and what you can do to fix a diagnosed compost problem: Moisture: Compost should have the moisture level of a rung-out sponge; wet but not soggy. Aeration: Proper air circulation is key to allow a compost pile to break down. Microorganisms: Without microorganisms, you will not have decomposition. My pile isn’t decomposing! Like this:

Composting for Serious Gardeners With more than forty years of experience redefining gardening's boundaries, author Will Bonsall shows how readers can eliminate the use of off-farm inputs like fertilizers, minerals, and animal manures by practicing a purely veganic, or plant-based, agriculture-not for strictly moral or philosophical reasons, but because it is more ecologically efficient and makes good business sense. In Will Bonsall’s Essential Guide to Radical, Self-Reliant Gardening, (Chelsea Green Publishing, 2015) he offers readers in-depth information on growing, harvesting, and processing an incredibly diverse variety of food crops. The following excerpt is from Chapter 1, “Composting as if it Mattered.” You can purchase this book from the MOTHER EARTH NEWS STORE: Will Bonsall’s Essential Guide to Radical Self-Reliant Gardening. I make compost and lots of it, and not just because it’s something hippie homesteaders are expected to do, but because I get a kick out of doing it. So then, what do you do with it?