Resources for Teaching about Soil 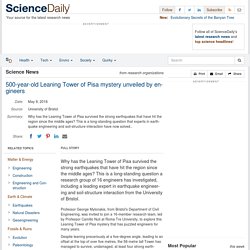 This is a long-standing question a research group of 16 engineers has investigated, including a leading expert in earthquake engineering and soil-structure interaction from the University of Bristol. Professor George Mylonakis, from Bristol's Department of Civil Engineering, was invited to join a 16-member research team, led by Professor Camillo Nuti at Roma Tre University, to explore this Leaning Tower of Pisa mystery that has puzzled engineers for many years. Despite leaning precariously at a five-degree angle, leading to an offset at the top of over five metres, the 58-metre tall Tower has managed to survive, undamaged, at least four strong earthquakes that have hit the region since 1280.

Given the vulnerability of the structure, which barely manages to stand vertically, it was expected to sustain serious damage or even collapse because of moderate seismic activity. Mighty Mini Microbe. College Level. Spectroscopy: Simple solution for soil samples. Preparation of soil sample for visible near-infrared spectroscopy measurement. 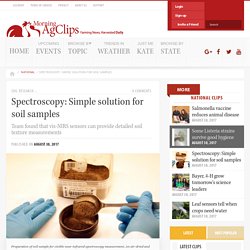 An air-dried and 2-mm sieved soil sample is poured into a rotating sample cup with transparent quartz window. (Maria Knadel) WASHINGTON — Farmers and gardeners know their soil texture can make a big difference in their success. Different plants have different needs for water, nutrients, and air. When they grow in soil that has the right texture, it is easier to deliver the right amount of water, fertilizer, or pesticide to the plants. Minerals Education Coalition. 159 Shrinking clay. Initial_check?slave_session=motl7v6o8t170nemqjg039sr50&singlesignon_dest= The 2015 International Year of Soils was a resounding success! 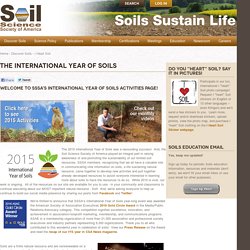 And, the Soil Science Society of America played an integral part in raising awareness of and promoting the sustainability of our limited soil resources. SSSA members, recognizing that we all have a valuable role in communicating vital information on soils, a life sustaining natural resource, came together to develop new activites and pull together already developed resources to assist everyone interested in learning more about soils to have the resources to do so. While 2015 is over, our work is ongoing. Genetically modified soil bacteria work as electrical wires. Scientists sponsored by the Office of Naval Research (ONR) have genetically modified a common soil bacteria to create electrical wires that not only conduct electricity, but are thousands of times thinner than a human hair. 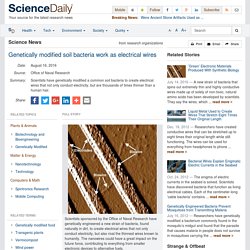 As electronic devices increasingly touch all facets of people's lives, there is growing appetite for technology that is smaller, faster and more mobile and powerful than ever before. Thanks to advances in nanotechnology (manipulating matter on an atomic or molecular scale), industry can manufacture materials only billionths of a meter in thickness. 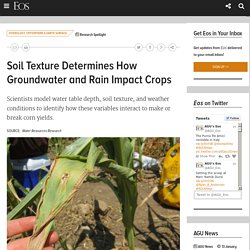 This level of production feeds populations around the world and sustains the U.S. economy—but it could be higher. Although farmers, lawmakers, and scientists may be able to improve corn yields with careful management, policy, and genetic modifications, some of the biggest influences on production are beyond human control. How Engineers Use Ground Freezing to Build Bigger, Safer, and Deeper — NOVA Next. The cleanup after the meltdown at the Fukushima Daiichi nuclear power plant has been anything but smooth. 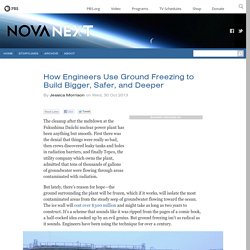 First there was the denial that things were really so bad, then crews discovered leaky tanks and holes in radiation barriers, and finally Tepco, the utility company which owns the plant, admitted that tens of thousands of gallons of groundwater were flowing through areas contaminated with radiation. But lately, there’s reason for hope—the ground surrounding the plant will be frozen, which if it works, will isolate the most contaminated areas from the steady seep of groundwater flowing toward the ocean. The ice wall will cost over $300 million and might take as long as two years to construct.

It’s a scheme that sounds like it was ripped from the pages of a comic book, a half-cocked idea cooked up by an evil genius. But ground freezing isn’t as radical as it sounds. Above- and below-ground tanks store contaminated water at the Fukushima Daiichi disaster site. Freeze Ray. January: Soils Sustain Life. Soil Solutions: A Medieval Soil Mystery. Ray Murray. Raymond C. 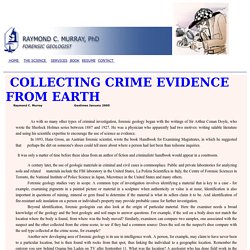 Murray Geotimes January 2005 As with so many other types of criminal investigation, forensic geology began with the writings of Sir Arthur Conan Doyle, who wrote the Sherlock Holmes series between 1887 and 1927. He was a physician who apparently had two motives: writing salable literature and using his scientific expertise to encourage the use of science as evidence. In 1893, Hans Gross, an Austrian forensic scientist, wrote the book Handbook for Examining Magistrates, in which he suggested that perhaps the dirt on someone's shoes could tell more about where a person had last been than toilsome inquiries.

It was only a matter of time before these ideas from an author of fiction and criminalists' handbook would appear in a courtroom. A century later, the use of geologic materials in criminal and civil cases is common­place. The murder of John Bruce Dodson produced one of the most interesting cases in the entire history of forensic geology. Raymond C. Abstract Junger, E. Soils. Do You "Heart" Soil? 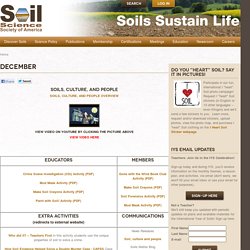 Say it in Pictures! Participate in our fun, international I "heart" Soil photo campaign! Request I "heart" Soil stickers (in English or 13 other languages – even Klingon) and we’ll send a few stickers to you. Soil Resources. April: Soils Clean and Capture Water. Soils. Soil Health Quiz 1.