HSOs are hemostatic soil organisms - microorganisms found in dirt. Some promote HSOs as a solution for gut problems. Here is one perspective backed up with some research.

HSO's Part 1 - HSO's Not as Safe as They Are Believed to Be! One of the largest pieces of misinformation exchanged in the natural health blogosphere is the notion that HSO organisms are 100% safe. 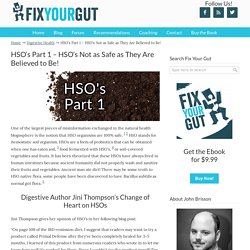 HSO stands for hemostatic soil organism. HSOs are a form of probiotics that can be obtained when one has eaten soil, food fermented with HSO’s, or soil-covered vegetables and fruits. It has been theorized that these HSOs have always lived in human intestines because ancient humanity did not properly wash and sanitize their fruits and vegetables. Ancient man ate dirt! There may be some truth to HSO native flora, some people have been discovered to have Bacillus subtilis as normal gut flora. Jini Thompson gives her opinion of HSO’s in her following blog post: “On page 108 of the IBD remission diet, I suggest that readers may want to try a product called Primal Defense after they’ve been completely healed for 3-5 months. However, since meeting the founder and president of Natren, Inc. I’m very sorry for any confusion this may have caused you.

July 2003. HSO's Part 2 - Is Bacillus subtilis Dangerous? Bacillus Subtilis: Any Benefit of the Bacteria Is Not Worth The Risk I will not recommend any probiotic that contains any strains from the Bacillus genus, including Bacillus subtilis, to my clients. 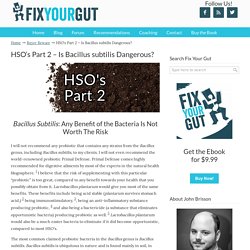 I will not even recommend the world-renowned probiotic Primal Defense. Primal Defense comes highly recommended for digestive ailments by most of the experts in the natural health blogosphere. I believe that the risk of supplementing with this particular “probiotic” is too great, compared to any benefit towards your health that you possibly obtain from it. Lactobacillus plantarum would give you most of the same benefits. The most common claimed probiotic bacteria in the Bacillus genus is Bacillus subtilis. Endospores are dormant, tough encapsulations that protect the bacteria from your immune system, antibiotics, antibacterials, and even probiotics.

In the rare case that subtilis became opportunistic, it would be almost impossible to eliminate using standard antimicrobials. HSO's Part 3 - I Do Not Recommend Prescript Assist. Want to learn all about the HSOs in Prescript Assist? 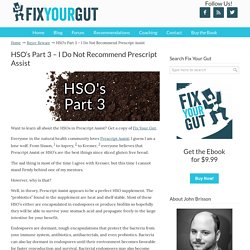 Get a copy of Fix Your Gut. Everyone in the natural health community loves Prescript Assist; I guess I am a lone wolf. From Sisson, to Asprey, to Kresser, everyone believes that Prescript Assist or HSO’s are the best things since sliced gluten free bread. The sad thing is most of the time I agree with Kresser, but this time I cannot stand firmly behind one of my mentors.

Another Look at Prescript Assist. Rob and Rachel, friends of mine over at Modern Life Survivalist do a lot of great work blogging about lesser known issues like mold toxicity and multiple chemical sensitivity. 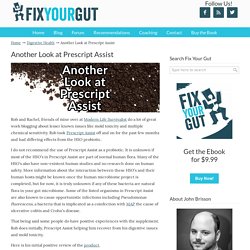 Rob took Prescript Assist off and on for the past few months and had differing effects from the HSO probiotic. I do not recommend the use of Prescript Assist as a probiotic. It is unknown if most of the HSO’s in Prescript Assist are part of normal human flora. Many of the HSO’s also have non-existent human studies and no research done on human safety. More information about the interaction between these HSO’s and their human hosts might be known once the human microbiome project is completed, but for now, it is truly unknown if any of these bacteria are natural flora in your gut microbiome.

That being said some people do have positive experiences with the supplement. Here is his initial positive review of the product. HSO's Part 4 - What About Saccharomyces boulardii? HSO's Part 5 - Did Our Ancestors Gorge Themselves on Dirt? Dirt is rich in HSO’s! 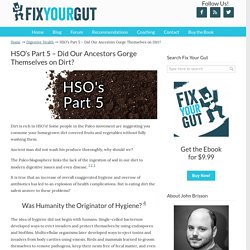 Some people in the Paleo movement are suggesting you consume your homegrown dirt covered fruits and vegetables without fully washing them. Ancient man did not wash his produce thoroughly, why should we? The Paleo blogosphere links the lack of the ingestion of soil in our diet to modern digestive issues and even disease. HSO's Part 6 - What About Enterococcus faecalis? Everyone believes I have a vendetta against HSO’s. 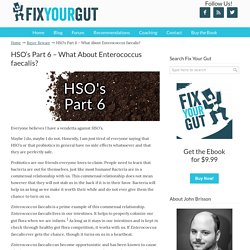 Maybe I do, maybe I do not. Honestly, I am just tired of everyone saying that HSO’s or that probiotics in general have no side effects whatsoever and that they are perfectly safe. Probiotics are our friends everyone loves to claim. People need to learn that bacteria are out for themselves, just like most humans! HSO's Part 7 - Why I Do Not Recommend MegaSporeBiotic or My Issues With Bacillus licheniformis. My Issues With Bacillus licheniformis What about a new probiotic that produces antioxidants once it propagates in your intestinal tract. 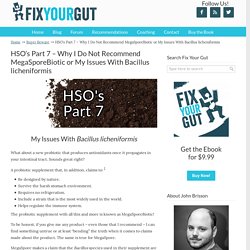 Sounds great right? A probiotic supplement that, in addition, claims to: Be designed by nature.Survive the harsh stomach environment.Requires no refrigeration.Include a strain that is the most widely used in the world.Helps regulate the immune system. The probiotic supplement with all this and more is known as MegaSporeBiotic!

To be honest, if you give me any product – even those that I recommend – I can find something untrue or at least “bending” the truth when it comes to claims made about the product. MegaSpore makes a claim that the Bacillus species used in their supplement are the most widely researched and used in the world. MegaSpore also makes a claim that Bacillus indicus HU36 would produce a wide variety of carotenoid antioxidants once it colonizes the large intestine. HSO’s Part 8 – Why I Am on the Fence in Recommending Bacillus Coagulans. I continued to get asked quite frequently here at Fix Your Gut is there any HSO that you trust? 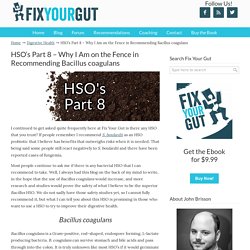 If people remember I recommend S. boulardii as an HSO probiotic that I believe has benefits that outweighs risks when it is needed. That being said some people still react negatively to S. boulardii and there have been reported cases of fungemia. Most people continue to ask me if there is any bacterial HSO that I can recommend to take. Well, I always had this blog on the back of my mind to write, in the hope that the use of Bacillus coagulans would increase, and more research and studies would prove the safety of what I believe to be the superior Bacillus HSO. HSO's Part 9 - Why I Do Not Recommend Just Thrive AKA MegaSporeBiotic Lite.

Kiran seems to be at it again with a “re-branding” of MegaSporeBiotic known as Just Thrive. 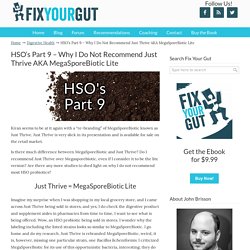 Just Thrive is very slick in its presentation and is available for sale on the retail market. Is there much difference between MegaSporeBiotic and Just Thrive? Do I recommend Just Thrive over Megasporebiotic, even if I consider it to be the lite version? Soil Based Organism Probiotics – The Reality. I think the easiest way to start a discussion is to look at what is in Swanson Ultra Dynamic Balance Blend Soil-Based Organisms. 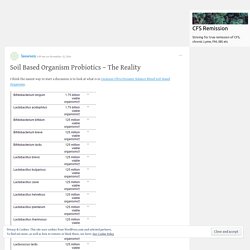 What! Those are “normal” probiotics! What is going on???? Just Thrive Probiotics – Update.