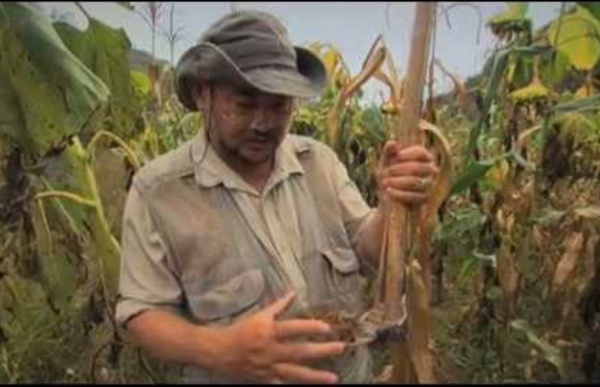 How to Grow Garlic: Organic Gardening Soil preparation: Garlic will tolerate some shade but prefers full sun. While I've seen cloves sprout in gravel pits, garlic responds best in well-drained, rich, loamy soil amended with lots of organic matter. Raised beds are ideal, except in very dry regions. Planting: To grow garlic, you plant the cloves, the sections of the bulb; each clove will produce a new bulb. The largest cloves generally yield the biggest bulbs. Spacing: Place cloves in a hole or furrow with the flat or root end down and pointed end up, with each tip 2 inches beneath the soil. Watering: Garlic needs about an inch of water each week during spring growth. Scape Sacrifice: By mid-June, your garlic will begin sprouting flowery tops that curl as they mature and ultimately straighten out into long spiky tendrils. Harvesting Hints When half to three-quarters of the leaves turn yellow-brown, typically in late June or early July (depending on the variety and the weather), it's harvest time.

John D Liu- Ecosystem Restoration in a Time of Crisis John D Liu is an American who has lived in China for more than 30 years. John has concentrated on ecological film making since the mid-1990’s, and has written, produced and directed films on Grasslands, Deserts, Wetlands, Oceans, Rivers, Urban Development, Atmosphere, Forests, Endangered Animals, and Poverty Reduction. His work has taken him to over 70 countries. Many of his films have appeared on BBC World and other networks. In 2003, Mr. Liu wrote, produced and directed “Jane Goodall – China Diary” for National Geographic. Since 1997, John has directed the EEMP, which uses television to deliver ecological, sustainable development and public health messages in China and other countries.

Punk Rock Homesteading | resistance is fertile Putting pigs in the shade: the radical farming system banking on trees | John Vidal | Environment The land to the north of the village of Foros de Vale Figueira in southern Portugal has been owned and farmed through the centuries by Romans, Moors, Christians, capitalists, far rightists, even the military. It has been part of a private fiefdom, worked by slaves as well as communists. Now this 100-hectare (247-acre) patch of land just looks exhausted – a great empty grassland without trees, people or animals, wilting under a baking Iberian sun. But look closely and you can just see the future: tips of thousands of tiny oak and nut trees following the contours and poking through thick mulches of grass and leaves. “This will be the new montado,” says Alfredo Cunhal, referring to a pre-medieval Portuguese system of farming. The montado system combines herds of animals with productive trees and shrubs. “Imagine tall trees, like 40-metre tall walnuts, putting down leaves, letting light through, drawing up water. “Animals are the key,” he says. The results are beginning to show.

The 16 Best Healthy, Edible Plants to Grow Indoors From farmers’ markets and Community Supported Agriculture, to urban farms and rooftop gardens, to produce delivery services, more and more people across the U.S. are embracing farm-fresh food. And for good reason: Locally grown produce tends to be better for the environment and for local communities than its store-bought counterparts. Growing food at home also ensures that growers know exactly where their food comes from and how it was grown (no need to worry about deceptive food labeling). If you’re not whipping out the pruning shears yet, consider this: Learning new skills is good for our brains. Luckily, you don’t need to be a farmer (or even live near a farm) in order to reap the benefits of home-grown produce. If you have a sunny window (or two, or five) and a bit of extra time on your hands, then you’re capable of growing your own food right at home. General Growing Tips Fruits and Veggies Photo: Alpha 1. 2. 3. 4. How to Harvest: Most lemons will ripen in six to nine months. 5. 6. 7.

A 1-acre permaculture farm supplies 50 families I've always been somewhat of a lazy gardener. And that's why permaculture has always made a whole lot of sense to me. Instead of throwing physical labor and fossil fuels at any given problem, the idea behind permaculture gardening is to use nature's own design tricks to create productive landscapes that do much of the work for you. I've seen these design principles applied to various degrees of success. But Limestone Permaculture Farm in New South Wales, Australia, might be one of the finest examples yet—producing significant amounts of food from just one acre, and using only part time labor to do so. Limestone uses many of the staple permaculture tricks, including swales (ditches dug on contour to harvest rainwater and planted up with perennial crops), self-seeding edible ground cover crops, no-dig garden beds and a chicken tractor too to till the land and cycle nutrients. Impressive stuff.

Human Or Just Another Programme? by Elva Thompson The world around is going crazy. I think we’d all agree with that. We talk to people about gmo’s, radiation, dying bees, chemtrails etc., trying to spread the word of planetary genocide. The short answer is NO. A third dimensional consciousness lives only for the senses and base instincts. They are nothingness, just reproducing in the programme like other animals. So what about us, the tired warriors of change? The answer is: We are not third dimensional beings in terms of spiritual frequency. Our mission is to destroy the Archon programme in ourselves and access the fifth chakra: the pentagon of space. Only through the Heart can this be achieved. Are we alone in our struggle against the Archon dark? No, we are not. We and our world are made up of five great Titans; the powers that never sleep. And they will answer for That Art Thou. The twenty six year period of our travail is nearly up. “Man is in process of changing ? Much Love.

Want to double world food production? Return the land to small farmers! The United Nations declared 2014 as the International Year of Family Farming. As part of the celebrations, the UN Food and Agriculture Organisation (FAO) released its annual 'State of Food and Agriculture', which this year is dedicated to family farming. Family farmers, FAO say, manage 70-80% of the world's farmland and produce 80% of the world's food. But on the ground - whether in Kenya, Brazil, China or Spain - rural people are being marginalised and threatened, displaced, beaten and even killed by a variety of powerful actors who want their land. A recent comprehensive survey by GRAIN, examining data from around the world, finds that while small farmers feed the world, they are doing so with just 24% of the world's farmland - or 17% if you leave out China and India. How, then, can FAO claim that family farms occupy 70 to 80% of the world's farmland? Just what is a 'family farm' Small farmers are ever more squeezed in Small is beautiful - and productive The message is clear.

How to Grow Ginger | How To Grow Stuff Ginger is popular in American food, but it’s practically a staple in Asian cuisine. Not only is it easy to grow and delicious in recipes, but studies show that ginger packs powerful health benefits. Although it is a tropical plant, it will adapt easily to indoor and container planting, making it possible for anyone to enjoy fresh ginger throughout much of the year. Before You Plant Choose the Right Type of Ginger: For practical purposes, ginger is most often home-grown from tubers. Find a Suitable Place: Plan to grow ginger indoors unless you live in the extreme southern portions of the U.S. or in one of the desert states. Prepare the soil: Mix organic material or prepared compost into soil to fill the container (or amend garden soil in the same manner).Ginger will grow quite well in commercially prepared potting soil. Planting/Growing Ginger What You Will Need: Ginger rootPrepared soil How to Plant Ginger: Harvesting/Pruning Ginger Ginger requires very little maintenance. Related Posts

Transforming a conventional orchard into a fruit forest From 2000-year-old food forests to an amazing, chaotic and largely self-sustaining allotment, we've seen plenty of examples of permaculture projects that aim to rethink the model of how we grow food. What's often asked, however, is whether permaculture can really replace mainstream farming. Stefan Sobkowiak believes it can. Now a new documentary project seeks to spread the word about his work.

Greenpop Launches Trees for Zambia 2013 In 2012 Greenpop launched Trees for Zambia, a reforestation and eco-awareness project which began with a 3-week tree planting event and was followed by an ongoing campaign to inspire awareness about deforestation, climate change, tree planting, environmental sustainability and alternative energy sources. Trees for Zambia 2013 will be the second Action Event hosted in Livingstone to boost the project and plant around 5000 trees in schools, on subsistence farms and in reforestation sites . Again Greenpop will host educational workshops for school children, subsistence farmers and volunteers. Trees for Zambia is a holistic awareness campaign based on getting people active about making sustainable changes. From 7 th to 28 th July 2013, the Trees for Zambia Conference of Action will be held in Livingstone, Zambia. Greenpop invites people, young and old, to come along for 1, 2 or 3 weeks. What to expect: Get Active and Dig – plant trees and make solar cookers at local schools and in

The Mainer Saving the World's Rarest Heirloom Seeds | Down East By Laura PoppickPhotographed by Greta RybusFrom our April 2020 issue When Will Bonsall was growing up in Waterville in the 1950s and ’60s, his family lived modestly, and their grocery budgets were often tight. His folks weren’t much for gardening, and what fresh produce they brought home was rationed among him and his two brothers. His grandparents, however, lived on a small farm in nearby Belgrade, and whenever he and his family visited, the stockpiles of homegrown sweet corn and juicy beefsteak tomatoes seemed endless. There was no need to negotiate shares with his brothers. Today, Bonsall lives on a dirt road in Industry, in the western Maine foothills, in a farmhouse atop a terraced slope covered with apple trees and overlooking lush gardens. Bonsall led me upstairs, his white ponytail swinging behind him, and into a small room filled with boxes and bags overflowing with dried plant stalks and stems. On the top shelf, Bonsall said, were more than 1,100 varieties of peas.

20 Uses for Garlic : EcoSalon Pungent and powerful, garlic has dozens of health and household uses. Chew up a raw clove of garlic and you might exhale noxious, eye-watering clouds of stink all day, but you’ll also repel mosquitoes (and vampires), increase your immunity, heal cold sores, expel parasites and maybe even get in the mood. Garlic is a broad-spectrum antibiotic, killing bacteria, fungus, viruses and mold, so it’s an important ally for natural health. Check out these 20 unusual and sometimes strange alternative uses for garlic.Acne Slice open a clove of raw, fresh garlic and apply it to breakouts as a home remedy for acne. Pesticide Whiteflies, aphids, cabbage loopers and squash bugs. Cold sore treatment These unsightly lesions always seem to pop up at the most inopportune times, like the morning before a big date. Mosquito repellent If you don’t mind smelling like Italian dressing, garlic can work wonders in warding off pesky mosquitoes without the use of DEET and other potentially toxic chemicals. Fish bait