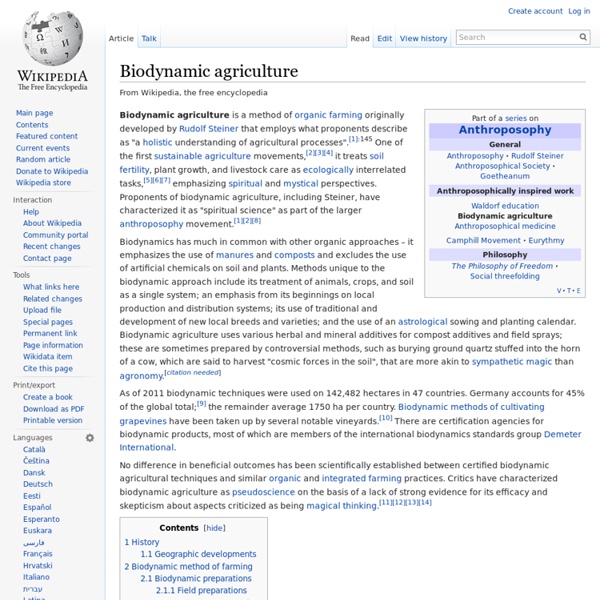 Biodynamic agriculture is a method of organic farming originally developed by Rudolf Steiner that employs what proponents describe as "a holistic understanding of agricultural processes".[1]:145 One of the first sustainable agriculture movements,[2][3][4] it treats soil fertility, plant growth, and livestock care as ecologically interrelated tasks,[5][6][7] emphasizing spiritual and mystical perspectives. Proponents of biodynamic agriculture, including Steiner, have characterized it as "spiritual science" as part of the larger anthroposophy movement.[1][2][8] Biodynamics has much in common with other organic approaches – it emphasizes the use of manures and composts and excludes the use of artificial chemicals on soil and plants. As of 2011 biodynamic techniques were used on 142,482 hectares in 47 countries. Germany accounts for 45% of the global total;[9] the remainder average 1750 ha per country. History[edit] Geographic developments[edit] Biodynamic method of farming[edit] Reviews[edit]

Agribusiness In agriculture, agribusiness is the business of agricultural production. It includes agrichemicals, breeding, crop production (farming and contract farming), distribution,farm machinery, processing, and seed supply, as well as marketing and retail sales. Within the agriculture industry, "agribusiness" is used simply as a portmanteau of agriculture and business, referring to the range of activities and disciplines encompassed by modern food production. There are academic degrees in and departments of agribusiness, agribusiness trade associations, agribusiness publications, and so forth, worldwide. In this context the term is only descriptive, and is synonymous in the broadest sense with food industry. The UN's Food and Agriculture Organization (FAO), for example, operates a section devoted to Agribusiness Development[1] which seeks to promote food industry growth in developing nations. Examples[edit] Studies and reports[edit] See also[edit] Notes and references[edit] Further reading[edit]

Food Processing Industry Food Processing Top 100 Food and Beverage Companies Food Processing's annual list of the top 100 food and beverage companies in the United States and Canada is the only list of its kind. Nowhere else can you sort manufacturers by sales, rank or income all in one place. Our 38th annual Top 100© list ranks food and beverage processors based on their sales of value-added, consumer-ready goods that were processed in U.S. and Canadian facilities. You won't find a comparable list anywhere else; you won't find many of these figures anywhere else, either. Read the analysis for the 2013 list by visiting Top 100 Food and Beverage Companies for 2013: Starting Over. Be sure to visit the current list Top 100 Food and Beverage Companies for 2014 Click on the table headers to sort each column; All figures in millions, U.S. dollars

ConAgra Foods — making the food you love untitled Choose plants that purify the indoor air | GreenYour.com Add This feature is only available to GreenYour members. Please sign-up. By choosing plants that purify the indoor air in homes and offices, you're helping to clear the indoor environment of pollutants, thereby reducing the amount of greenhouse gas emissions that escape from your home into the outside air. How to use purifying plants Place two to three plants in each room of your house, or about 15 plants for every 1500 square feet. Find it! Gurney's Seed & Nursery Co.AddThis feature is only available to GreenYour members. Top ten housecleaning plants All houseplants improve the quality of indoor air, since they absorb carbon dioxide and release oxygen. Lady palm Spider plant Dwarf date palm Bamboo palm Sword fern Areca palm Blue daisy American rubber plant Boston fern Blue-eyed daisy Important warning: A number of houseplants are toxic for young children and pets. Choosing plants that purify the indoor air helps you go green because... Controversies Although Dr. Glossary External links

Claas Home The 800 Series offers four new models: JAGUAR 880 (626 hp), JAGUAR 860 (516 hp), JAGUAR 850 (462 hp), and the JAGUAR 840 (408 hp). Mercedes inline 6 engines deliver Tier 4f power to the entire line. The top-end 880 offers a power curve comparable to the JAGUAR 960, while the JAGUAR 840 – the least powerful offering in the new JAGUAR 800 series – fits a niche for those who don’t require quite as much power as the base JAGUAR 930. According to CLAAS of America Product Coordinator, Matt Jaynes, “Those who are familiar with the JAGUAR line of forage harvesters will remember the ‘Green Eye’ series, which was sold here in North America just a few years ago. Some of those classic characteristics include a mechanical feed roll design delivering an industry-exclusive six different lengths of cut from a V-CLASSIC drum, instead of the infinitely variable cut length and V-MAX drum of the 900 Series.

Buy a new Earth New "Super Earth" Found at Right Distance for Life A new planet—probably a rocky super-Earth—has been found squarely within its star's habitable zone, making it one of the best candidates yet to support life, its discoverers say. The planet, dubbed GJ 667Cc, orbits a red dwarf star 22 light-years from Earth, in the constellation Scorpio. A binary pair of orange dwarf stars are part of the same system. (Related: "'Tatooine' Planet With Two Suns Could Host Habitable Moon?") The new planet has a mass 4.5 times that of Earth and orbits its host star every 28 days. The red dwarf is relatively dim, so the planet receives slightly less light from its star than Earth does from the sun. That means if the planet has a rocky surface—which is predicted for planets less than ten times Earth's mass—and an atmosphere, it could support liquid water and maybe life, said co-discoverer Guillem Anglada-Escudé, who conducted the work while at the Carnegie Institution for Science in Washington, D.C. Rocky Planet Around Unexpected Star

Closest Sun-Like Star May Have Livable Planet What's the Latest Development? Astronomers at the University of Hertfordshire, UK, have discovered that the closest single star like our Sun may have an habitable planet in its orbit. The star, called Tau Ceti, is just twelve light years from Earth and is believed to have five planets surrounding it, all between two and six times the mass of planet Earth. What's the Big Idea? Using new planet-hunting techniques, more than 800 foreign world have been discovered but those discoveries close to home are the most important, says Steve Vogt from University of California Santa Cruz: "This discovery is in keeping with our emerging view that virtually every star has planets, and that the galaxy must have many such potentially habitable Earth-sized planets. Photo credit: Shutterstock.com