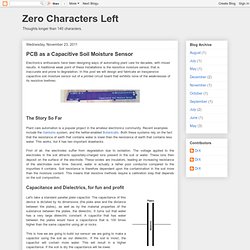 A traditional weak point of these installations is the resisitive moisture sensor, that is inaccurate and prone to degradation. Deep darc » Soil Moisture Sensor Update. I ended up building the prototype soil moisture sensor boards I mentioned in a previous post, and... it works! 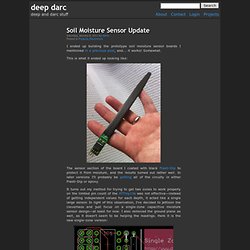 Somewhat. This is what it ended up looking like: It turns out my method for trying to get two zones to work properly on the limited pin count of the ATTiny13a was not effective—instead of getting independent values for each depth, it acted like a single large sensor. In light of this observation, I've decided to jettison the cleverness and just focus on a single-zone capacitive moisture sensor design—at least for now. I also removed the ground plane as well, as it doesn't seem to be helping the readings. I've ordered a some of these boards from BatchPCB with my last order, so when I get the boards back (in about a month) I'll post again to describe how they turn out. I'll post some code once I get it working well, but if you would like some idea of the theory behind how it works, read up on AVR's QTouch library. Starter Kit » Blog Archive Humidity sensor » Starter Kit. 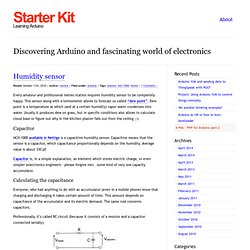 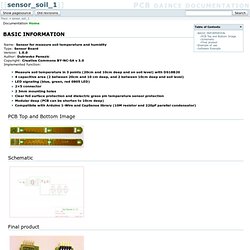 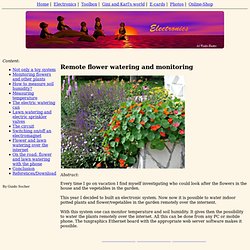 I used cotton strings to connect my plants to a bottle of water. This system is very simple but works never because it does not adjust to the demands of the plants. It is either always too wet or always too dry. LWET. In agriculture, warm, wet weather promotes fungus diseases and moisture-loving insects. 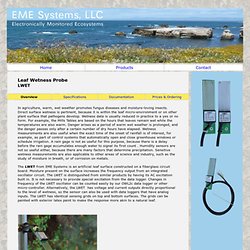 Direct surface wetness is pertinent, because it is within the leaf micro-environment or on other plant surface that pathogens develop. Wetness data is usually reduced in practice to a yes or no form. For example, the Mills Tables are based on the hours that leaves remain wet while the temperatures are also warm. Danger arises as a period of warm wet weather is prolonged, and the danger passes only after a certain number of dry hours have elapsed. Wetness measurements are also useful when the exact time of the onset of rainfall is of interest, for example, as part of control systems that automatically open and close greenhouse windows or schedule irrigation. The LWET from EME Systems is an artificial leaf surface constructed on a fiberglass circuit board. Capacitive Liquid Level Sensor « Souly Solar Rebuilds. Capacitive sensors of all sorts have been an interest of mine. 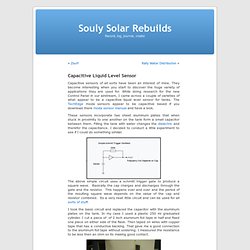 They become interesting when you start to discover the huge variety of applications they are used for. While doing research for the new Control Panel in our airstream, I came across a couple of varieties of what appear to be a capacitive liquid level sensor for tanks. The TechEdge moda sensors appear to be capacitive based if you download there moda sensor manual and have a look. These sensors incorporate two sheet aluminum plates that when stuck in proximity to one another on the tank form a small capacitor between them.

Filling the tank with water changes the dielectric and therefor the capacitance. The above simple circuit uses a schmitt trigger gate to produce a square wave. I took the basic circuit and replaced the capacitor with the aluminum plates on the tank. Really not to bad for a quick hack. Pretty linear eh!!! Chirp! - the plant watering alarm. I’m a programmer/systems architect by education and by the way of winning bread, but somehow I got infected with the electronics bug 3 years ago - had a sidejob to upgrade the firmware of a LED display, got into microcontrollers, then made myself comfortable in analog. 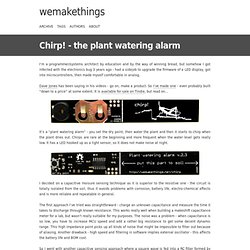 Dave Jones has been saying in his videos - go on, make a product. So I’ve made one - even probably built “down to a price” at some extent. It is available for sale on Tindie, but read on… It’s a “plant watering alarm” - you set the dry point, then water the plant and then it starts to chirp when the plant dries out. Chirps are rare at the beginning and more frequent when the water level gets really low.