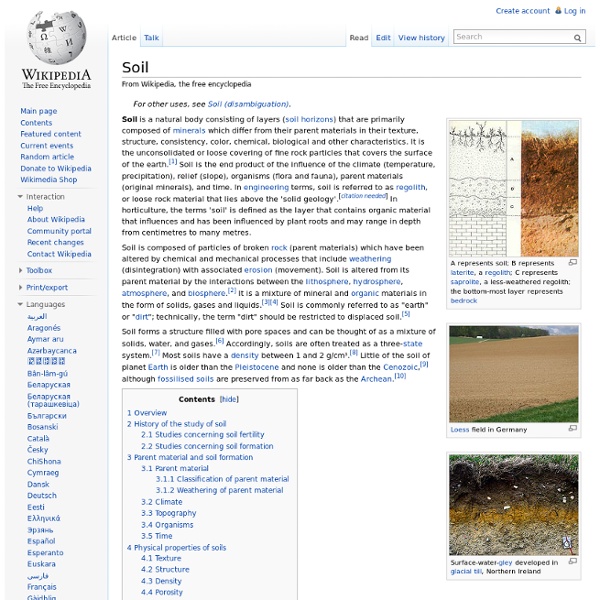 Soil is the mixture of minerals, organic matter, gases, liquids and a myriad of micro- and macro- organisms that can support plant life. It is a natural body that exists as part of the pedosphere and it performs four important functions: it is a medium for plant growth; it is a means of water storage, supply and purification; it is a modifier of the atmosphere; and it is a habitat for organisms that take part in decomposition and creation of a habitat for other organisms. Soil is considered the "skin of the earth" with interfaces between the lithosphere, hydrosphere, atmosphere, and biosphere.[1] Soil consists of a solid phase (minerals & organic matter) as well as a porous phase that holds gases and water.[2][3][4] Accordingly, soils are often treated as a three-state system.[5] Overview[edit] Soil is a major component of the Earth's ecosystem. Soils can effectively remove impurities, kill disease agents, and degrade contaminants. History of the study of soil[edit] In 1856 J. Curtis F. Related:  Quality

International Biochar Initiative | International Biochar Initiative The secret to richer, carbon-capturing soil? Treat your microbes well Imagine if someone invented machines to suck carbon out of the atmosphere — machines that were absurdly cheap, autonomous, and solar powered, too. Wouldn’t that be great? But we already have these gadgets! The problem is, plants die. This has left people scratching their heads. Clive Kirkby was one of those government agents urging farmers to leave dead plant residues in their fields. As he was proselytizing, Kirkby began to bump heads with an agronomist named John Kirkegaard. This made Kirkby crazy. “I’ve been returning the stubble to the ground now for six years, and it’s just not going into the soil,” Kirkegaard told him. The way that soil locks up greenhouse gas has been frustratingly mysterious, but the basics are clear: After plants suck up the carbon, the critters (microbes and fungi and insects) swarming in the topsoil chew up plant molecules, subjecting them to one chemical reaction after another as they pass through a fantastically complex food web. “Humus!” This stopped me.

Welcome to EarthActionMentor - Earth Action Mentor Soil An important factor influencing the productivity of our planet's various ecosystems is the nature of their soils. Soils are vital for the existence of many forms of life that have evolved on our planet. For example, soils provide vascular plants with a medium for growth and supply these organisms with most of their nutritional requirements. Figure 1: Most soils contain four basic components: mineral particles, water, air, and organic matter. Soil itself is very complex. Organic Activity A mass of mineral particles alone do not constitute a true soil. Humus is the biochemical substance that makes the upper layers of the soil become dark. It enhances a soil's ability to hold and store moisture. Organic activity is usually profuse in the near surface layers of a soil. Translocation When water moves downward into the soil, it causes both mechanical and chemical translocations of material. Soil Texture Clay is probably the most important type of mineral particle found in a soil. Soil pH

Free-Energy Devices, zero-point energy, and water as fuel Soil Structure & Composition Sunday, 06 June 2010 07:35 The Plant Lady Living Matter Mostly in the top 4" of the soil. Good guys & bad guys...but large volume & diversity control the trouble makers by making it a competive environment for resources. 1 teaspoon of soil: 1 billion bacteria several yards of fungal hyphae several thousand protozoa few dozen nematodes Bacteria attracted by the root exudate (carbohydrates and proteins secreted from the plant roots). the numbers and kinds of bacteria that are attracted are controlled by the plant, depending on season and conditions most bacteria need carbon sources to live. bacteria use slime to stick to substrates and move around. this slime traps pathogens. this slime is also responsible for sticking soil particles together, giving soil its structure. vitmamins and antiobiotics are produced by some bacteria & fungi that help the plants bacteria also work in th ephyllosphere (leaf surface) Fungi fungal hyphae kill nematodes, which are after the plant roots Protozoa Nematodes earthworms

Permaculture (How to Design Systems for Sustainable, Community Living) – Bill Mollison « Only Ed Posted16 September 2011, by Staff, Sterling Insights, sterlinginsights.com Permaculture (permanent agriculture/culture) is the use of Ecology as the basis for designing integrated systems of food production, housing, technology, & community development. The objective is to produce an efficient, low-maintenance, productive integration of plants, structures & people, to obtain on-site stability & food self-sufficiency in the smallest practical area. See also: Bruce Charles ‘Bill’ Mollison (born 1928 in Tasmania, Australia) is a researcher, author, scientist, teacher and naturalist. He is considered to be the ‘father of permaculture‘, an integrated system of design, co-developed with David Holmgren, that encompasses not only agriculture, horticulture, architecture and ecology, but also economic systems, land access strategies and legal systems for businesses and communities. THE PERMACULTURE CONCEPT – Part 1

Soil and Health Library Start a 1-Acre, Self-Sufficient Homestead - Modern Homesteading Everyone will have a different approach to keeping a self-sufficient homestead, and it’s unlikely that any two 1-acre farms will follow the same plan or methods or agree completely on how to homestead. Some people like cows; other people are afraid of them. Some people like goats; other people cannot keep them out of the garden. Some people will not slaughter animals and have to sell their surplus stock off to people who will kill them; others will not sell surplus stock off at all because they know that the animals will be killed; and still others will slaughter their own animals to provide their family with healthy meat. For myself, on a 1-acre farm of good, well-drained land, I would keep a cow and a goat, a few pigs and maybe a dozen hens. Raising a Dairy Cow Cow or no cow? On the other hand, the food that you buy in for this family cow will cost you hundreds of dollars each year. 1-Acre Farm With a Family Cow Grazing Management Intensive Gardening Half-Acre Crop Rotation

How to Assess Soil Composition The health of garden plants depends on the soil's composition — the proper balance of mineral pieces, organic matter, air, and water. Knowing the type of soil you have can help you choose techniques to enhance its good qualities. The best garden soil should have proper balance of minerals, water, organic matter, and air. The relative amounts of clay, silt, and sand particles determine your soil texture: Clay particles are microscopic and flat. Determine the type of soil you have. For most plants, the ideal mixture is approximately 40 percent sand, 40 percent silt, and 20 percent clay. Clay soils are naturally fertile, but the individual particles are so small that they pack tightly, leaving little room for water and air. Unfortunately, except by trucking in huge amounts of soil, you have no way to change your soil's texture. Many factors affect soil structure, but the most important ones include the following:

Sharing Knowlege... Feeding Nations 8 Steps for Making Better Garden Soil Starting to build a new garden isn’t difficult. Most people begin by going out into their yards with a shovel or garden tiller, digging up the dirt and putting in a few plants. Following the organic and natural methods, add a little mulch or compost, and you’re well on your way to make good soil for your homegrown vegetables. But in the long run, the success of your garden depends on making healthy garden soil. In the last issue, I discussed the value of soil care methods that imitate natural soil communities. In this article, I’ll focus on specific ways to achieve these goals. Add Organic Matter For the best soil, sources of organic matter should be as diverse as possible. 1. You should apply manure with care. However, because some nutrients from manures are so readily available, they are more likely to leach out of the soil (where they’re needed) into groundwater and streams (where they’re pollutants). When thinking of manure, it’s worth considering our own. 2. 3. 4. 5. 6. 7. 8.