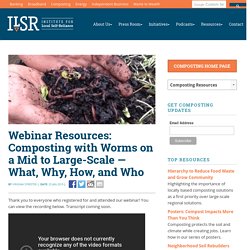 I’m Brenda Platt, the director of the Institute for Local Self Reliance is composting for community initiative. This webinar is one in a series that we offer to advance composting and share working models and tips for replication. We are particularly interested in supporting a distributed, distributed, and diverse infrastructure for composting and food waste reduction and recovery. Our last webinar featured bike powered food scrap collection with a spotlight on equipment, so check that out. Given the importance of healthy soils to healthy food and healthy communities, and particularly now increasingly recognized carbon sequestration. 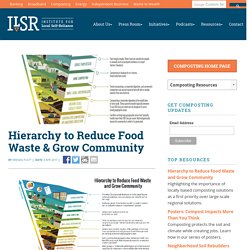 Composting can be small scale and large scale and everything in between but too often home composting, onsite composting, community scale composting, and on-farm composting are overlooked. Anaerobic digestion systems come in different sizes as well. This new hierarchy addresses issues of scale and community benefits when considering what strategies and infrastructure to pursue for food waste reduction and recovery. The US Environmental Protection Agency has long been a strong advocate of food waste recovery. Composting - Institute for Local Self-Reliance. Youtube. Groupe FCM, FCM Group, diggers, excavators, backhoes, FCM is a current producer of towable diggers and joint owner Donald Dupont kindly provided the information and pictures for this page. 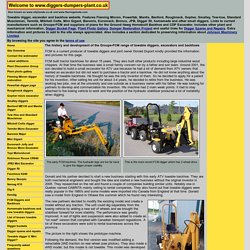 FCM built tractor backhoes for about 15 years. They also built other products including large industrial wood chippers. The greens machines- towable backhoe- other projects. Thegreensmachines@gmail.com Bill's.. 110 Volt Backhoe Bill needed to dig out the basement under his house. 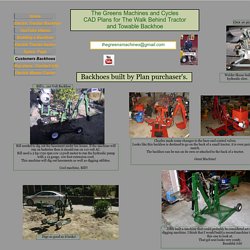 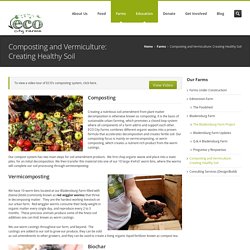 It is the basis of sustainable urban farming, which promotes a closed loop system where all components of a farm add to and support each other. ECO City Farms combines different organic wastes into a proven formula that accelerates decomposition and creates fertile soil. Our composting focus is mainly on vermicomposting, or worm composting, which creates a nutrient rich product from the worm castings. Gasifier for Heat. BioChar Advocates. Soil Remediation. Pyrolyzer - Contact. BioEnergy Lists: Biochar Mailing Lists. Sharing technical and event information about Biochar from the Biochar email lists.

Centre for Research in Energy and Energy Conservation. This site exists to help people develop better stoves for cooking with biomass fuels in developing regions. Engineers Aim To Make Cleaner-Burning Cookstoves For Developing World - Slashdot. Vinces99 writes in with news about a new cookstove design for developing countries. 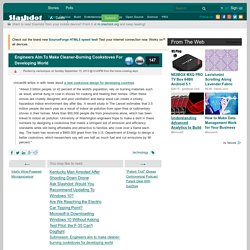 "About 3 billion people, or 42 percent of the world's population, rely on burning materials such as wood, animal dung or coal in stoves for cooking and heating their homes. Often these stoves are crudely designed, and poor ventilation and damp wood can create a smoky, hazardous indoor environment day after day. A recent study in The Lancet estimates that 3.5 million people die each year as a result of indoor air pollution from open fires or rudimentary stoves in their homes. More than 900,000 people die from pneumonia alone, which has been linked to indoor air pollution. University of Washington engineers hope to make a dent in these numbers by designing a cookstove that meets a stringent set of emission and efficiency standards while still being affordable and attractive to families who cook over a flame each day. 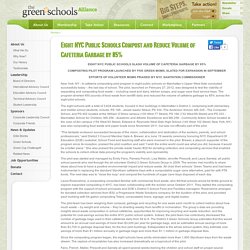 The pilot, launched on February 27, 2012, was designed to test the viability of separating and composting food waste – including meat and dairy, kitchen scraps, and sugar cane food service trays. The program diverted 450 pounds of food waste from landfill daily and reduced the volume of cafeteria garbage by 85% across the eight pilot schools. “This fantastic endeavor succeeded because of the vision, collaboration and dedication of the workers, parents, and school professionals,” said District 3 Council Member Gale A.

Brewer, at a June 19 awards ceremony honoring NYC Department Of Education (DOE) custodial, School Food and teaching staff who were involved in the pilot. Since the composting program began, the eight schools have jointly eliminated more than 1,900 Styrofoam trays from the waste stream. Green Schools. Smallscaleguidance. Why Composting? - Cornell Composting. (You can click on the photos to view them in larger form.) 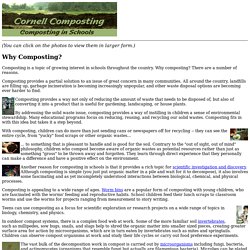 Composting is a topic of growing interest in schools throughout the country. Why composting? There are a number of reasons. Composting provides a partial solution to an issue of great concern in many communities. All around the country, landfills are filling up, garbage incineration is becoming increasingly unpopular, and other waste disposal options are becoming ever harder to find.

School Composting: Teachers Love It—and It Saves Schools Money. Schools across America are increasingly adopting a practice that not only saves them thousands of dollars and benefits the environment, but offers students hands-on projects that correspond to the curriculum at every grade level. 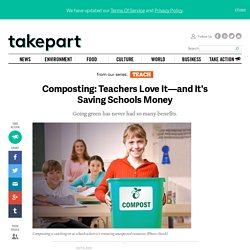 Surprisingly enough, this sensational practice is composting. Early to the green bin game, San Francisco already had the infrastructure in the '90s to be the first to place the receptacles in school cafeterias, and now at least 80 percent of the city's public schools have them. Not surprisingly, of the other districts with strong school composting programs are Portland and Seattle, as well as many other districts in Oregon and Washington state. Tamar Hurwitz, environmental education manager at the San Francisco Department of the Environment, says she's shared start-up information with many municipalities, like Cambridge, MA, Denver, CO, and even rural Bellingham, WA. But there are further economic benefits to the process. But the benefits hardly stop there. From waste to rich organic compost or the Pro-Grow journey - Pro-Grow. From waste to rich organic compost or the Pro-Grow journey... 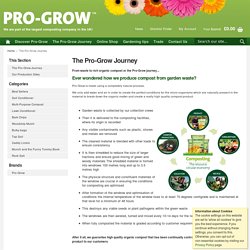 Ever wondered how we produce compost from garden waste? Pro-Grow is made using a completely natural process. We only add water and air in order to create the perfect conditions for the micro-organisms which are naturally present in the material to break down the organic matter and create a really high quality compost product. After it all, we guarantee high quality organic compost that has been continually controlled to ensure we offer the best product to our customers. Blog - What is the Soil Food Web? - Soils Alive, Inc. - Organic Lawn Care - Dallas, TX. Products Archive - Heidelberg Farms. New York City and School Districts Across the Country Form Urban School Food Alliance to Serve Healthier Meals and Keep Costs Down - 2012-2013. The New York City Department of Education today announced a partnership with other school districts to form the Urban School Food Alliance to encourage the healthy meals while keeping costs down.

Today’s lunch will include roasted chicken, brown rice with seasoned black beans, steamed green broccoli, fresh fruit and assorted milk. “Our goal is to offer our students nutritious and delicious meals while keeping costs down,” said Deputy Chancellor of Operations Kathleen Grimm. Urban Schools Aim for Environmental Revolution. Photo Nothing seemed special about the plates from which students at a handful of Miami schools devoured their meals for a few weeks last spring — round, rigid and colorless, with four compartments for food and a fifth in the center for a carton of milk.

Looks, however, can be deceiving: They were the vanguard of what could become an environmental revolution in schools across the United States. With any uneaten food, the plates, made from sugar cane, can be thrown away and turned into a product prized by gardeners and farmers everywhere: compost. If all goes as planned, compostable plates will replace plastic foam lunch trays by September not just for the 345,000 students in the Miami-Dade County school system, but also for more than 2.6 million others nationwide.

Compostable Plastic is a which undergoes biological degradation during composting at a rate consistent which other know compostable materials leaving no visually distinguishable or toxic residues. PLA is a bioplastic which is made from really renewable resources such as corn, soybeans, potato, etc. Cellulose acetate is made from processed wood pulp. How To Make A Worm Farm < OpenTutorial. This tutorial explains How to Make a Worm Farm.

Worm farms can be an effective method of composting materials, for use in gardening, and a great source of fishing bait. Worm farms can also be a fun learning project for kids. Worms can do wonders for the garden: they aerate the soil and their castings are an excellent fertilizer. To get a constant supply of this worm fertilizer as well as extra worms for the garden, start a worm farm. Waste Optimization – Day 17. Time flies when you’re having fun! Here we are at Day 17 in our Waste Optimization Challenge. Although most of the results were fairly predictable, it’s still been really interesting to see how things have progressed over the last couple of weeks. All the once-frozen carrots have now disappeared, and it doesn’t look like the last group (added fresh) is going to last much longer.

Eight NYC Public Schools Compost and Reduce Volume of Cafeteria Garbage by 85% Composting at School 0307. School Composting: Teachers Love It—and It Saves Schools Money. NYC, Miami and 27 other large School districts are ditching Styrofoam trays. I have shared with the Board the following article from The New York Times, Urban Schools Aim for Environmental Revolution, and then emailed them my comments below. Dear Board, Cafeteria Composting Manual for printing. At School, Turning Good Food Into Perfectly Good Compost. Slide Show One by one, the children at Public School 30 on Staten Island dumped their uneaten bananas into a bin in the back of their raucous cafeteria, each greenish-yellow missile landing with a thud. Thud. Promising Practices. A Good Idea Description. Plan. First Awesome Food Grant! Compost Mobile of Miami—Collecting Food Scraps from Home Kitchens.