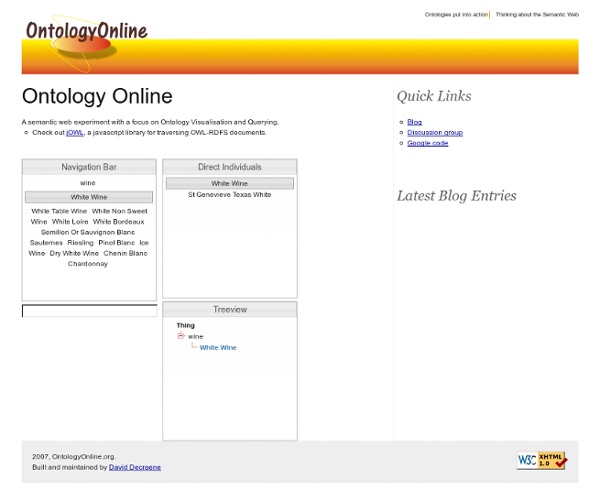 An Intrepid Guide to Ontologies Ontology is one of the more daunting terms for those exposed for the first time to the semantic Web. Not only is the word long and without many common antecedents, but it is also a term that has widely divergent use and understanding within the community. It can be argued that this not-so-little word is one of the barriers to mainstream understanding of the semantic Web. The root of the term is the Greek ontos, or being or the nature of things. Literally — and in classical philosophy — ontology was used in relation to the study of the nature of being or the world, the nature of existence. While there have been attempts to strap on more or less formal understandings or machinery around ontology, it still has very much the sense of a world view, a means of viewing and organizing and conceptualizing and defining a domain of interest. There has been a resurgence of interest in ontologies of late. These events have sparked my preparing this guide to ontologies. There is an M.C.

Knoodl Ontology Tools - TechWiki This listing received its last major update on Aug 22, 2010 (though with minor additions since). All tools added at that time are marked with <New> (new only means newly discovered; some had yet to be discovered in prior listings). There are now a total of 185 tools in the listing, 31 of which are new, and 45 from the first release. <Newest> reflects updates — most from the developers themselves — since the original publication of this post. Comprehensive Ontology Tools Altova SemanticWorks is a visual RDF and OWL editor that auto-generates RDF/XML or nTriples based on visual ontology design. Not Apparently in Active Use Adaptiva is a user-centred ontology building environment, based on using multiple strategies to construct an ontology, minimising user input by using adaptive information extraction Exteca is an ontology-based technology written in Java for high-quality knowledge management and document categorisation, including entity extraction. Vocabulary Prompting Tools

About WordNet - WordNet - About WordNet WordNet is supported by the National Science Foundation under Grant Number 0855157. Any opinions, findings, and conclusions or recommendations expressed in this material are those of the creators of WordNet and do not necessarily reflect the views of the National Science Foundation. About WordNet WordNet® is a large lexical database of English. Nouns, verbs, adjectives and adverbs are grouped into sets of cognitive synonyms (synsets), each expressing a distinct concept. WordNet superficially resembles a thesaurus, in that it groups words together based on their meanings. Structure The main relation among words in WordNet is synonymy, as between the words shut and close or car and automobile. Relations The most frequently encoded relation among synsets is the super-subordinate relation (also called hyperonymy, hyponymy or ISA relation). Meronymy, the part-whole relation holds between synsets like {chair} and {back, backrest}, {seat} and {leg}. Adjectives are organized in terms of antonymy.

SWOOP - Semantic Web Ontology Editor My favorites ▼ | Sign in Project Home Downloads Wiki Issues Source Terms - Privacy - Project Hosting Help Powered by Google Project Hosting The Linking Open Data cloud diagram ConverterToRdf - W3C Wiki A Converter to RDF is a tool which converts application data from an application-specific format into RDF for use with RDF tools and integration with other data. Converters may be part of a one-time migration effort, or part of a running system which provides a semantic web view of a given application. See also: RDFImportersAndAdapters Please add converters as you make them or hear of them. Formats in alphabetical order: BibTex BibTex is the format for bibliographic references in TeX. BibBase transforms BibTeX files (given in a URL) into Linked Data with RDF/XML output support. Bittorrent is alas now 404 (in 2007). CSV (Comma-Separated Values) See also: Flat Files and TSV An RDF Extension is available for Google Refine. Debian The package information in Debian and similar systems (Ubuntu, Fink, etc), with its general usefulness and its graph-like nature, is a clear candidate for conversion to RDF. See VitaVoni blog about this. Excel See JPEG. File Systems