Why We Ask to See Candidates’ Tax Returns 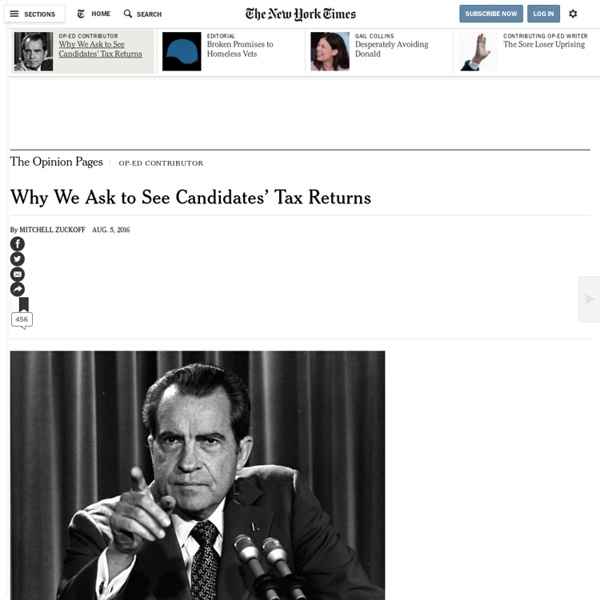 Photo Boston — Lost in the debate over Donald J. Trump’s refusal to release his tax returns is the story of where the custom of disclosure comes from — and why it can be so valuable as a measure of character. It’s a tale of presidential tax shenanigans, political scandal and one of the most famous quotations in American history: Richard M. Nixon’s “I am not a crook.” The story begins in July 1969, when Congress eliminated a provision of the tax code that had allowed a sitting or former president to donate his papers to a public or nonprofit archive in exchange for a very large tax deduction. In his taxes for 1969, President Nixon indicated that four months before Congress acted, he had donated more than 1,000 boxes of documents to the National Archives. The write-off didn’t become public until 1973, when it was mentioned in passing during a lawsuit related to the Watergate break-in. Had Nixon really beaten the deadline? No single comment would stick more firmly to Nixon.

Ronald Reagan and The Great Social Security Heist : FedSmith.com View this article online at Ronald Reagan was one of the most popular presidents in modern history. As a former Hollywood actor, he had an uncommon degree of charisma. The conservatives absolutely loved Reagan for his efforts to reduce the size of government, but most liberals hated him with a passion. Reagan is still revered by a lot of Americans. Fake news. It's complicated. - First Draft News This article is available also in Deutsch, Español, Français and العربية By now we’ve all agreed the term “fake news” is unhelpful, but without an alternative, we’re left awkwardly using air quotes whenever we utter the phrase. The reason we’re struggling with a replacement is because this is about more than news, it’s about the entire information ecosystem.

The Making of Donald Trump, As Told by a Journalistic Nemesis - BillMoyers.com Veteran reporter David Cay Johnston wasn't satisfied with how the media has been covering Donald Trump. So he wrote a book. (Photo by Chip Somodevilla/Getty Images) Pulitzer Prize-winning reporter David Cay Johnston isn’t happy with the way the press has been handling Donald Trump. “The coverage has been extremely poor in my opinion,” Johnston, who at 67 clearly still enjoys making trouble, pronounced at no less a lions’ den than the National Press Club on Thursday night in Washington. So Johnston, as he is wont to do when he sees something going wrong, decided to tackle the problem himself.

Meet the lazy welfare recipients who have spent millions in food stamps: Military service members Over the past few years, we have had Republican governors cutting food stamp rolls in their states. We have seen Republican and Democratic lawmakers cut billions from food stamps. Whether it’s through bullshit drug-testing laws or bullshit work requirement laws, the main culprits, Republicans, have felt that the best way to be able to tell people you have gotten people off of the Supplemental Nutrition Assistance Program (SNAP) was not to create a living wage for your citizens, but to just take those assistance programs away. Forget about the fact that food stamps has kept two million children from being in abject poverty. Forget about the fact that the people needing assistance need it because they are dealing with serious hardships and trying to house themselves and their families, while putting food on the table has been nearly impossible.

If Jeff Sessions Will Not Resign, He Should Be Impeached Article II, Section 4 of the Constitution of the United States announces that “The President, Vice President and all civil Officers of the United States, shall be removed from Office on Impeachment for, and Conviction of, Treason, Bribery, or other high Crimes and Misdemeanors.” The attorney general of the United States is a civil officer. If he has lies under oath to the Senate, that act demands impeachment. After news reports published last Wednesday made it clear that Jefferson Beauregard Sessions III had deceived the Senate regarding his interactions with Russian officials, there were immediate demands that the attorney general recuse himself from investigations into issues relating to those lies and that he resign as the nation’s chief law-enforcement officer. Sessions announced Thursday afternoon that he would recuse himself from any examination of Russian involvement with President Trump’s campaign. Sessions has made his position clear.

Why Won't Donald Trump Release His Tax Returns? Scott Stantis/Tribune Content Agency David Horsey/Tribune Content Agency Michael Ramirez/Creators Syndicate Linda Taylor, welfare queen: Ronald Reagan made her a notorious American villain. Linda Taylor’s other sins were far worse. Ronald Reagan loved to tell stories. When he ran for president in 1976, many of Reagan’s anecdotes converged on a single point: The welfare state is broken, and I’m the man to fix it. On the trail, the Republican candidate told a tale about a fancy public housing complex with a gym and a swimming pool. There was also someone in California, he’d explain incredulously, who supported herself with food stamps while learning the art of witchcraft. And in stump speech after stump speech, Reagan regaled his supporters with the story of an Illinois woman whose feats of deception were too amazing to be believed.