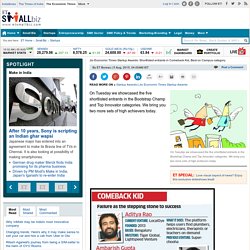 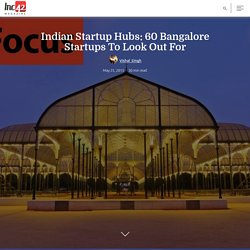 According to AngelList, Bangalore boasts more than 1700 startups. Home of companies like Flipkart and InMobi, the city has seen growth of numerous startups in the past few years. In this series, we will be talking about some of the growth stage startups, the startups that have raised huge sums of capital and the ecosystem builders in Bangalore. This time we bring to you the list of Bangalore-based growth stage startups that have successfully raised their seed funding (uptill Series A) and doing amazing job. Lookup Founder(s): Deepak Ravindran Founded in: 2014 Funding: $3 Mn / Series A from Investors: Biz Stone (yet to close the round) and $382k / Seed in January 2015 from “Kris” Gopalakrishnan, MKS Instruments. India has the highest shop density in the world with over 45 Mn local businesses. Must See India. Seattle Startups List. TopChart - The Best Things in Lists. 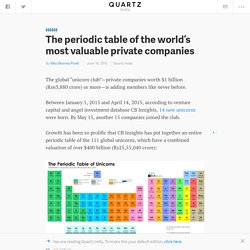 It was a radical law, given that about two-thirds of listed companies in the country had no woman on their boards in June 2014. The result was chaos. Even a year after the law was passed, one-third of the firms scrambled in the final two weeks before the deadline to find woman directors. Some high-profile firms—including Reliance Industries—simply added the wives of chairmen to the boardrooms. More than 12% failed to find a woman at all. But it’s not as if there aren’t enough women in India with the education and career experience to hold these positions. Consider, for instance, the women graduates from the country’s finest engineering schools. Where did all these women go—and why aren’t they leaders in Indian industry today?

Here are their stories: Work much harder than the boys Post-pregnancy pause. Indian Startup Hubs: 60 Bangalore Startups To Look Out For. Our Four Favorite Companies At The 500 Startups Batch 12 Demo Day. Oh look, it’s already that time of the year again — we’re down in Mountain View for another demo day from the 500 Startups accelerator. 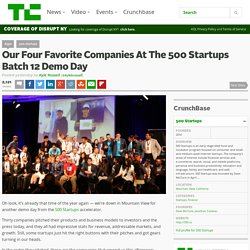 Thirty companies pitched their products and business models to investors and the press today, and they all had impressive stats for revenue, addressable markets, and growth. Still, some startups just hit the right buttons with their pitches and got gears turning in our heads. In the order they pitched, these are the companies that wowed us this afternoon: Alfred – lets users repurpose old Android phones as Dropcam-style home security cameras that can be accessed from anywhere.

In their first year, they had 1,000,000 phones added to their service, keeping literal tons of electronics from being sent to dumps. Raur – building a podcasting service that brings together feeds from popular shows to listen to and tools for generating your own live and recorded content in a single app on your phone. GridCure – analytics for the smart power grid. The home for tech startups.