Is This the Best Startup Launch Video Ever? 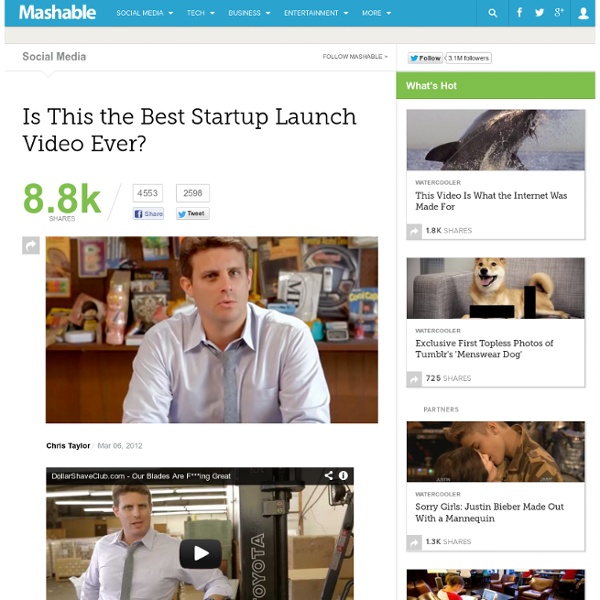 A dollar a month for razors, shipped to your door? Most thrifty guys and gals who wield a blade in the bathroom won't need much convincing that that's a good idea for a startup. But how to ensure that they hear about it, and that they have enough confidence in the company to sign up? Simple: create a funny YouTube video — one with so much swagger, sight gags and bear costumes that it seems poised to go viral. That's the apparent strategy behind Dollar Shave Club, a startup from LA-based Incubator Science. Dollar Shave Club is the brainchild of Michael Dubin, the suave guy explaining the concept. If there's one lesson we'd like CEOs to learn from the Dollar Shave Club, it is this: don't take yourselves and your product so seriously. Dubin isn't the only entrepreneur to find success solely on the basis of a well-crafted video. We've assembled a gallery of other amusing startup videos — including one that started out as a parody and became a real service.

IGM: Apple launches iTunes U app creating a virtual classroom for students Apple Thursday announced a new app designed to interact with and expand its iTunes U content collection. The app bring together the course materials in podcast form on an iOS device. With the app, users will be able to essentially have a virtual classroom where users will be able to subscribe to courses, see notes from the instructor, gather materials, and get notifications on updates. Also, if students take notes within iBooks, those notes will be available within he iTunes U app. It seems Apple is trying to incorporate features similar to the Blackboard service. iTunes U App also brings together content from other areas of the iTunes Store including iBooks and App Store. Educators can manage their classes using a Web-based tool. Recent Articles Browse and search for more articles

Collection of Helpful Cheat Sheet Wallpapers for Web Designers and Developers Last year we brought together an ultimate list of cheat sheets and quick references for web designers and developers.Well,all of them were PDF files but this time we have compiled only cheat sheet wallpapers for web designer s and developers More Cheat Sheet Wallpapers Spread your love! Share this post if you like it:

Steve Jobs Was Right, Android Logs Everything [Video Back in April, Apple had a bit of a PR problem when it was discovered that iPhones were storing a cache of data on which GPS locations that handset had visited in an unencrypted file. The whole thing was just a bug, but the controversy was dubbed LocationGate, and Apple even had to testify in front of the Senate about the matter. The whole fiasco even prompted an email from Steve Jobs, which dropped something of a bombshell: he said Apple doesn’t track anyone’s location, but that Android tracked everyone. At the time, there wasn’t a lot of proof to back up Steve’s assertion, but as it often does, time has proven Steve Jobs right. 25-year-old Android developer Trevor Eckhart has discovered a piece of software that comes installed on most Android, BlackBerry and Nokia phones called Carrier IQ secretly logs everything a user does with his or her phone, including text messages, encrypted web searches, phone calls, location and, well, you name it. What is Carrier IQ? Absolutely insane.

The Official Dropbox Guide To Getting More Space! We get asked a lot how to get more space in your Dropbox, and we realized that we’ve never put an official guide together. So here it is! When people start using Dropbox, they start small but often need more and more space over time. We’ve created a bunch of free ways to get more space, but also make it simple to get loads of space really fast. Take A Tour For people new to Dropbox, there are a few things you should try out first — we want you to install Dropbox on a bunch of computers, use our sharing features, and more. Tell Your Friends A while back, we noticed that most of our growth was from word of mouth: people that love Dropbox tell their friends. Be A Student The first lines of Dropbox were written back when our cofounder Drew Houston had just graduated from school but forgot his USB key on a bus ride. Have Fun We’ve done a bunch of fun challenges and quests where the prize was more space.

Stanford's Free Developing Apps for iPhone and iPad 15 November '11, 08:05pm Follow Stanford University’s School of Engineering has a history of offering courses on some pretty interesting products for free online. Stanford’s iPad and iPhone Application Development (CS193P) course is now available for free on iTunes U. Stanford’s stuff is generally very good and the ratings on this course are excellent so far. The prerequisites are C language and programming experience and/or general object-oriented programming and UNIX experience.

Remember I was honoured to be asked to write a few words for my school’s Remembrance Ceremony this year. My school has a rather fine memorial at the back of the Assembly Hall, and in an effort to try and close the distance in time, I told the story of one of the names. I have to thank the A.K.Bell library and Commonwealth War Graves Commission for the information I was able to draw on. Just before 11 o’clock on the 11th of November, the Head Boy and Head Girl will stand up to tell the rest of the school about one of her sons: Sgt BCT Halley. 100 years ago, Bruce Halley had just turned 16. He would walk down the Glasgow Road, past Dewars’ Whisky Factory (now the ice rink), cross the railway bridge and then walk past St Ninian’s Cathedral on his way to Rose Terrace. After a full day of Maths, English, PE and Classics, Bruce and his pals would walk out to the North Inch to kick a ball about. Bruce Halley was, by all accounts, a normal 16 year old boy and pupil of Perth Academy. Like this:

Goes Creative Commons: 50 Great Images That Are Now Yours | Raw File  Wired.com photographers have the enviable job of shooting the coolest stuff and most intriguing people in the technology world. Now we’re giving away many of those photos to you, the public, for free. Beginning today, we’re releasing all Wired.com staff-produced photos under a Creative Commons (CC BY-NC) license and making them available in high-res format on a newly launched public Flickr stream. To mark our new licensing policy, we’ve compiled this gallery of 50 great pictures from our past stories. The Creative Commons turns 10 years old next year, and the simple idea of releasing content with “some rights reserved” has revolutionized online sharing and fueled a thriving remix culture. (CC is a nonprofit and you can contribute to their annual campaign right now: Placing our photos under CC BY-NC license means that designated images are free for all to republish, with minor restrictions, as follows:

Android Orphans: Visualizing a Sad History of Support The announcement that Nexus One users won’t be getting upgraded to Android 4.0 Ice Cream Sandwich led some to justifiably question Google’s support of their devices. I look at it a little differently: Nexus One owners are lucky. I’ve been researching the history of OS updates on Android phones and Nexus One users have fared much, much better than most Android buyers. I went back and found every Android phone shipped in the United States1 up through the middle of last year. I then tracked down every update that was released for each device - be it a major OS upgrade or a minor support patch - as well as prices and release & discontinuation dates. Other than the original G1 and MyTouch, virtually all of the millions of phones represented by this chart are still under contract today. Also worth noting that each bar in the chart starts from the first day of release - so it only gets worse for people who bought their phone late in its sales period. Why Is This So Bad? Consumers Get Screwed

The rise of LinkedIn’s news feed (And how Twitter made a big dumb mistake) Last week I was reading one of my industry news sources and an article caught my attention. I wanted to let my friends know about the piece so, as usual, I went to tweet about it. And that’s when I noticed this: There were more people posting the article to LinkedIn than there were people tweeting about it. And that’s when the sledgehammer hit me. Back in July Twitter announced that it was no longer going to allow users to post tweets automatically to LinkedIn. (At this point I should ‘fess up. Back to the topic du jour… By denying Linkedin users the ability to post tweets to LinkedIn, Twitter has forced users to make a choice. The forced change is more fundamental. It is therefore far more valuable for a user to post on LinkedIn as people that have a connection to them are much more likely to read their post. Twitter also did LinkedIn another huge favor. LinkedIn is going to overtake Twitter (and very quickly) in terms of importance and volume for users posting industry related news.