Tales of the tech unicorn’s impending demise might be somewhat exaggerated. 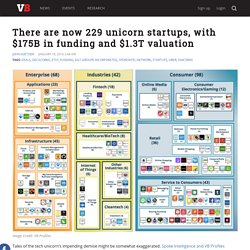 Spoke Intelligence and VB Profiles released a report recently that counted more than 208 of the mythical creatures, not to mention an additional 21 of the even more rarely spotted decacorns — startups with a valuation in excess of $10 billion. Almost half of them live in California. Ninety-eight of the unicorns are in the consumer space, especially in retail and the sharing (or “collaborative”) economy.

Examples of unicorns in retail include the online marketplace Etsy and Alibaba, the massive Chinese commerce platform. In the collaborative economy, you’ll recognize names like Airbnb and Lyft. “Unicorns are everywhere across the technology landscape,” said Spoke CEO Phillipe Cases. Examples in IoT include Nest (acquired by Google), DJI (the drone company), and Jasper Technologies, which builds technology for self-driving cars. Where the unicorns live. Could This Radical Concept Airline Be The Future Of Travel? - D'Marge.

A ban on carry-on luggage. 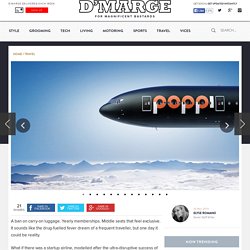 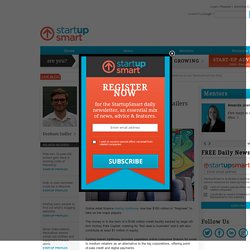 The money is in the form of a $108 million credit facility backed by large US firm Victory Park Capital, marking its “first deal in Australia” and it will also contribute at least $1 million in equity. Sydney-based zipMoney provides paperless online consumer finance for small to medium retailers as an alternative to the big corporations, offering point-of-sale credit and digital payments.

Billed as “online lending meets the checkout”, online retailers can embed its software into the checkout process, with its customers then getting the option to purchase an interest-free zipMoney account instead of paying with a credit card or PayPal. Top Invoice App for iOS and Android. Hardware As A Service: Tile Finds A Way To Keep Making Money.

Tile cofounder and CEO Mike Farley sat down with me Tuesday afternoon at our e2e Conference to talk about hardware innovation. 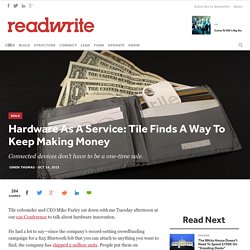 He had a lot to say—since the company's record-setting crowdfunding campaign for a $25 Bluetooth fob that you can attach to anything you want to find, the company has shipped 2 million units. Business ideas - Riding the fintech WAIV to a $100 million valuation. It was a problem that used to keep John Fenga up at night. One day his daughter, who is now five years old, will be travelling the world, and what if he needed to transfer her money urgently? “If my daughter was overseas and she was in a cab at midnight and couldn’t afford to pay, she’d have no option,” Fenga says. “Sending funds abroad is an absolute nightmare. It costs a fortune and takes forever.”

50 Companies That May Be the Next Start-Up Unicorns - The New York Times. Photo It used to be a rare thing when start-ups were valued at $1 billion or more by their investors. 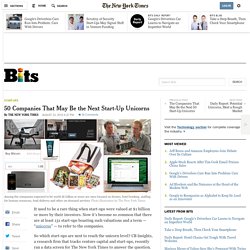 Now it’s become so common that there are at least 131 start-ups boasting such valuations and a term — “unicorns” — to refer to the companies. So which start-ups are next to reach the unicorn level? CB Insights, a research firm that tracks venture capital and start-ups, recently ran a data screen for The New York Times to answer the question. Taxicab Industry Has A New App To Compete With Uber - ReadWrite. This post appears courtesy of the Ferenstein Wire, a syndicated news service. 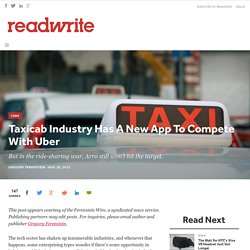 Publishing partners may edit posts. For inquiries, please email author and publisher Gregory Ferenstein. The tech sector has shaken up innumerable industries, and whenever that happens, some enterprising types wonder if there's some opportunity in helping established players stave off the inevitable. But beating back the forces that threaten to destabilize their businesses is even harder than it looks, and few succeed. The taxi industry is no different. See also: I Tested The Cutting Edge Of Taxi Innovation, And Things Went Awry Not that the industry doesn't keep trying.

Partnering with cab companies can be tempting, since many have the resources to pay for a pretty app that apes those of Uber, Lyft and Sidecar. Bits.blogs.nytimes. Business ideas - Agent of change: New startup helps young investors take first steps. Tarang Patel made his first investment when he had only just become a teenager. 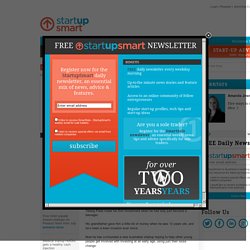 His grandfather gave him a little bit of money when he was 13 years old, and he’s been a keen investor ever since. Now he has co-founded a new Australian startup hoping to help other young people get involved with investing at an early age, using just their loose change. It’s called FirstStep and is a mobile app allowing users to invest loose change from electronic transactions into the company’s diverse portfolio. The service it provides is exactly the same as US startup Acorns, which is soon to launch here in Australia. Taking the first step Fellow co-founder Shiraj de Silva says young people can often feel the barrier to entry is too high in investments.