How 20 popular websites looked when they launched 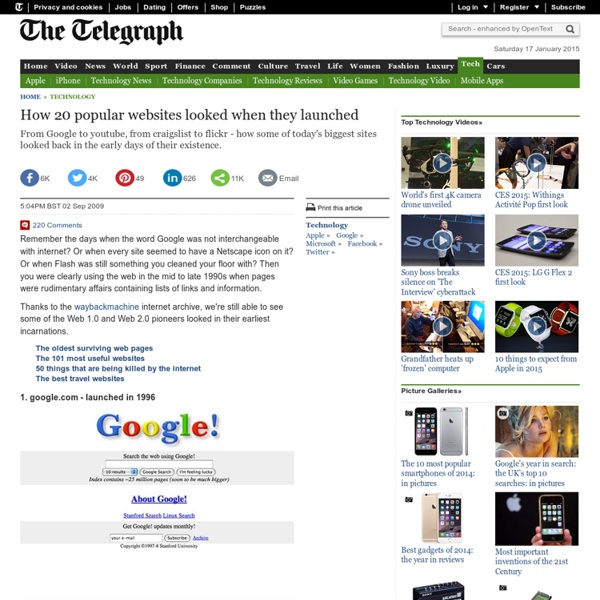 The first version of Google, Facebook, YouTube and more (and what they can teach us about starting small) 6.5K Flares Filament.io 6.5K Flares × “The best things we know and love started as tiny things.” — Joel Gascoigne Buffer’s CEO, Joel, wrote a post not too long ago about the importance of starting small with new projects. He makes some great points about how easy it is to see the finished product of someone else’s hard work and forget about how long it took them to get to that point: “It’s difficult to understand how the evolutionary process of products and brands contributes and is vital to what they are today.”

5 popular websites and how they looked 10 years ago As we’ve seen in this other post, a lot has changed in the past 10 years when it comes to website design. The code has become more advanced, offering better options and usability with the improved CSS3, HTML5, Javascript and jQuery. Ten years ago it was a very different story with the use of Flash and HTML Tables ruled the websites and CSS was still not widely used. Now let’s take a look back 10 years ago at some of the most popular websites visited today, and survey how much they’ve changed.

1998 - In the Garage Where Google Was Born It all started in a garage that you can still find with minimal effort — especially if you're using Google Maps. Less than one mile off U.S. Route 101, the highway that links San Francisco to the rest of Silicon Valley, you'll come to a quiet neighborhood a stone's throw from Stanford's beautifully manicured campus. It was in Menlo Park, in a single-story home on Santa Margarita Avenue, that Google co-founders Larry Page and Sergey Brin rented the garage from Susan Wojcicki, now a Google senior VP, who was fresh out of business school and afraid of missing her mortgage payments.

World Wide Web born at CERN 25 years ago In March 1989 Tim Berners-Lee, a scientist working at CERN, submitted a proposal to develop a radical new way of linking and sharing information over the internet. The document was entitled Information Management: A Proposal. And so the web was born. The first website at CERN – and in the world – was dedicated to the World Wide Web project itself. Last April CERN initiated a project to restore the first website, and to bring back the spirit of that time through its technical innovation and the founding principles of openness and freedom.

What can we learn from 3 of the world’s most innovative marketing campaigns? By Andrew Valentine on 21 May, 2013 21 Instead of getting into the technicalities of response-based marketing, let’s go straight to the heart of the matter. I want to share with you what might be the two best marketing messages I’ve ever seen. Yes, ever. By looking at the psychology of these two examples, you’ll be able to see the path to making your marketing irresistible. The Evolution of Websites: How 10 Popular Websites Have (And Have Not) Changed I was in high school in the mid-nineties when I first encountered the ever-expanding world of websites. At the time, I didn't realize that my future career would rely on this industry -- one which did not exist when I was in elementary school. Now in the year 2008, having created websites for over half my life, I look back and see how much websites have changed in the last decade and a half. At the same time, I can see how little they've changed as well, and I've realized that the internet as we know it today is only a teenager, with many years of growth still ahead. So in the vein of change, let's look at ten popular websites and their evolution throughout the last many years.

The World Wide Web project The WorldWideWeb (W3) is a wide-area hypermedia information retrieval initiative aiming to give universal access to a large universe of documents. Everything there is online about W3 is linked directly or indirectly to this document, including an executive summary of the project, Mailing lists , Policy , November's W3 news , Frequently Asked Questions . What's out there? Pointers to the world's online information, subjects , W3 servers, etc. Help on the browser you are using

The first-ever hashtag, @-reply and retweet, as Twitter users invented them Twitter is pretty simple, but it started out even simpler. The 140-character messaging service launched on March 21, 2006 with no way to send a reply or retweet someone. And it certainly didn’t have hashtags. The 10 Types of Startup Press Release Press releases are one of the most effective ways of keeping journalists, investors and potential investors up to date with what's going on at your company. By creating and maintaining this relationship, your chances of being covered in the media or being approached by investors / partners increases exponentially. Sending a press release is different to writing blog posts. On your company blog you might write all sorts of content for marketing purposes or inform users of product tweaks etc - content that is valuable to your immediate audience but not "newsworthy" to a greater audience. And in fact, reaching out to journalists with non-newsworthy announcements can be counter-productive to creating a relationship.

Websites We Visit: How They Look Like 10 Years Ago Most of us probably got our Internet connection somewhere 10 years back. It was also around that time we seen the sudden boom on Internet, thanks to Marc Andreessen and Netscape Communicator. Now that we are almost at the end of 2008, we thought it’s pretty interesting to look back at how some of the trend setters and the most trafficked websites were like 10 years back. Here are some of the top-tier brands of the tech industries and their websites have stayed on the Internet for more than a decade. Let’s take a look at how these websites look like 10 years ago, comparing with that it is now. Full list after jump.

The birth of the World Wide Web By Christmas 1990, Berners-Lee had defined the Web’s basic concepts, the URL, http and html, and he had written the first browser and server software. Info.cern.ch was the address of the world's first website and web server, running on a NeXT computer at CERN. The world's first web page address was which centred on information regarding the WWW project. Visitors could learn more about hypertext, technical details for creating their own webpage, and even an explanation on how to search the Web for information. 2006 Silicon Valley’s All Twttr Dodgeball is so New York! In Silicon Valley, its all Twttr! Twttr is a new mobile social networking application written by Noah Glass (and team), an Odeo-guy, a long time compadre of Blogger founder Ev Williams.

Running Marketing Tests with a Purpose Over the past few years, marketing on the web has become way too much fun. I remember trying to figure out what “hits” on awstats meant in high school, and I distinctly can recall how disappointed I was when I found out the true meaning. Nowadays, we have a plethora of useful programs that provide deep insight into how visitors use web applications. Many of these programs have a fire hose of data, and it can seem very daunting. I’ve been reading Lean Analytics, and it’s caused me to question some of my habits as a marketer. How 5 of the Biggest Websites Looked in 1998 Image Source Ah how the internet has changed. In just over a decade the internet has become one of the most important parts in our modern world. Naturally the design has changed a lot over time as well. From flashy gifs and bright blue text we have transformed to a cleaner, more organized internet. However; this doesn’t mean it is not fun to see how sites used to look.