This Indian startup could disrupt health care with an affordable diagnostic machine. Frustrated at the lack of interest by the medical establishment in reducing the costs of diagnostic testing, and seeing almost no chance of getting the necessary research grants, Kanav Kahol returned home to New Delhi in 2011. 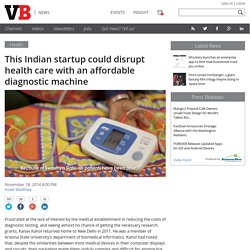 He was a member of Arizona State University’s department of biomedical informatics. Kahol had noted that, despite the similarities between most medical devices in their computer displays and circuits, their packaging made them unduly complex and difficult for anyone but highly skilled practitioners to use. And they were incredibly expensive — costing tens of thousands of dollars each. Kahol knew that the sensors in these devices were commonly available and inexpensive, usually costing only a few dollars. He believed he could connect these to a common computer platform and use commercially available tablets to display diagnostic information, thereby dramatically reducing the cost of the medical equipment.

Metrics for a Successful Startup is Revenue & Sustainability, Not How Much Money They Have Raised! Digital Health funding is exploding. 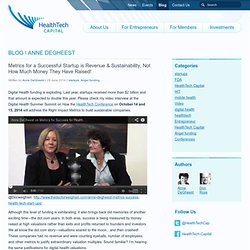 Last year, startups received more than $2 billion and that amount is expected to double this year. Please check my video interview at the Digital Health Summer Summit on How the HealthTech Conference on October 14 and 15, 2014 will address the Right Impact Metrics to build sustainable companies. @Docweighsin: Although this level of funding is exhilarating, it also brings back old memories of another exciting time—the dot.com years. 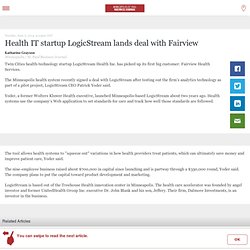 The Minneapolis health system recently signed a deal with LogicStream after testing out the firm’s analytics technology as part of a pilot project, LogicStream CEO Patrick Yoder said. Mana Health's Chris Bradley says bid to connect patients to their records is about to become reality - New York Business Journal. It's crunch time for Mana Health, an 2-year-old health-tech startup that's won a couple big clients and added some boldfaced names, but which has yet to actually unveil its product to the masses. 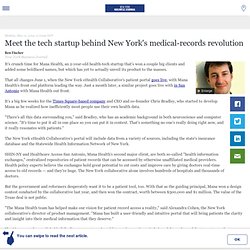 That all changes June 1, when the New York eHealth Collaborative's patient portal goes live, with Mana Health's front end platform leading the way. Just a month later, a similar project goes live with in San Antonio with Mana Health out front. It's a big few weeks for the Times Square-based company and CEO and co-founder Chris Bradley, who started to develop Mana as he realized how inefficiently most people use their own health data. "There's all this data surrounding you," said Bradley, who has an academic background in both neuroscience and computer science.

"It's time to put it all in one place so you can put it in context. But the government and reformers desperately want it to be a patient tool, too. Welcome to Forbes. WelVU nabs $1.25M seed funding to help patients remember their doctors' orders. How much do patients remember about the information they receive on their way out the door of a doctor’s office or a hospital? 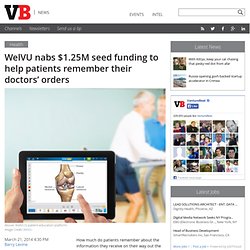 Not much, according to Portland, Oregon-based WelVU, which announced today it has received initial seed financing of $1.25 million to expand its business of personalized patient education. In fact, CEO and founder Mark Friess told VentureBeat, patients remember less than 20 percent of what they’re told by nurses or doctors. 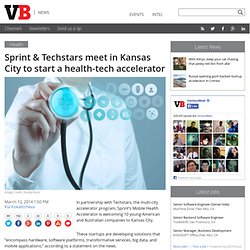 These startups are developing solutions that “encompass hardware, software platforms, transformative services, big data, and mobile applications,” according to a statement on the news. Health-care software firm Castlight near $1B IPO. The 5 hottest health-tech startups at SXSW. AUSTIN, Tex. — Health technology startups shone this year at South by Southwest Interactive. 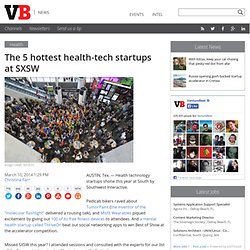 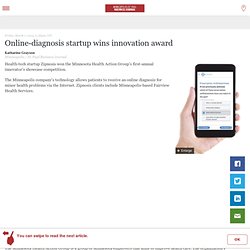 The Minneapolis company’s technology allows patients to receive an online diagnosis for minor health problems via the Internet. Zipnosis clients include Minneapolis-based Fairview Health Services. The Minnesota Health Action Group is a group of Minnesota employers that aims to improve health care. The organization’s innovator’s showcase gave five startups a chance to pitch their technology and services to a crowd of employers and health care executives. The audience selected Zipnosis as the winner.

“The action group is all about innovation that improves health care and Minnesota is a hotbed for health care innovation, which is why we introduced this award,” said Carolyn Pare, president and CEO of the organization. WebMD Acquires Health Tech Startup Avado To Accelerate Patient-Physician Connectivity. WebMD , the leading source of health information, today announced that it has acquired health tech startup Avado, a developer of cloud-based patient relationship management (PRM) tools for an undisclosed sum. 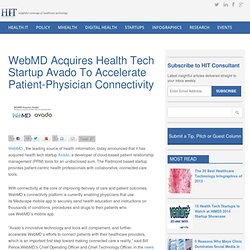 The Redmond based startup provides patient-centric health professionals with collaborative, connected-care tools. With connectivity at the core of improving delivery of care and patient outcomes, WebMD’s connectivity platform is currently enabling physicians that use its Medscape mobile app to securely send health education and instructions on thousands of conditions, procedures and drugs to their patients who use WebMD’s mobile app. TraveDoc, A Healthcare App For Travelers, Will Expand To The Middle East And South Asia. If you get sick while traveling, TraveDoc, an Uber for healthcare that currently operates in Ghana and Singapore, wants to be your go-to app. 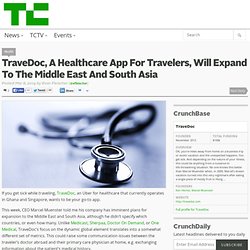 This week, CEO Marcel Muenster told me his company has imminent plans for expansion to the Middle East and South Asia, although he didn’t specify which countries, or even how many. Unlike Medicast, Sherpaa, Doctor On Demand, or One Medical, TraveDoc’s focus on the dynamic global element translates into a somewhat different set of metrics. This could raise some communication issues between the traveler’s doctor abroad and their primary care physician at home, e.g. exchanging information about the patient’s medical history. Launching the next health care startups. The evolving world of health care, from top-tier hospitals to remote clinics in the third world, is one of the most promising spaces for disruption. Technology is changing the way we process data, deliver medicine and evaluate diseases. Health care startup incubators are emerging as a result to identify and accelerate the entrepreneurs who will bring these new technologies to market.

Below, six incubators that are launching the next big ideas in health care. Athenahealth accelerator: The latest health startup accelerator was announced on Feb. 24. Startups to Watch at SXSWi 2014. Another year, another crop of upstart startups looking to use South by Southwest as a springboard to success. So what's different this year? Once again, if you go in expected to see the next Twitter, you'll probably leave disappointed. In fact, looking back over the past few years, SXSWi hasn't produced a hot new startup in a while. That doesn't stop dozens of new firms from attempting to make their mark on the event, which is now in its 20th year.

"The longer we're all in this business and the longer the business evolves, people get smarter, and understand that the more specific the needs are, the more specific the company is to address the needs, the more success there is," says Hugh Forrest, director of SXSW Interactive. Mature means that you're not likely to see a new social network that will supplant Facebook or Twitter. E-commerce. Mobile health news: MedWhat raises seed capital for app to process detailed medical questions.

If you had heart surgery and were being discharged, what questions would you be most likely to ask? How would an app distinguish between questions that require an urgent response and others that are simply routine questions that are part of the recovery process? Those are the questions MedWhat’s app seeks to answer. The mobile health startup and StartX graduate has closed a seed funding round of $560,000. Co-founder and CEO Arturo Devesa believes MedWhat’s app, which processes natural language to reach its answers, could lower healthcare costs by helping users answer questions in situations where they may otherwise go to the emergency room.

MedWhat’s app for iOS and Android operating systems uses semantic search technology — a process of understanding the actual meaning of words, concepts and attributes, and providing an answer. Devesa told MedCity News in a phone interview that it has raised $560,000 from Startcaps Ventures, Stanford Hospital and Stanford University.

Mayo Clinic physicians spin out a digital health company & snag $1.1M. A group of physicians from the Mayo Clinic have teamed up with Silicon Valley investors to launch a startup. The new entity, dubbed Ambient Clinical Analytics, raised $1.1 million in funding. The funding came from many of the usual suspects in digital health: The Social+Capital Partnership, accelerator program Rock Health, and Mayo Clinic, along with some unnamed Silicon Valley venture capitalists.