How Technology Disrupted The Truth 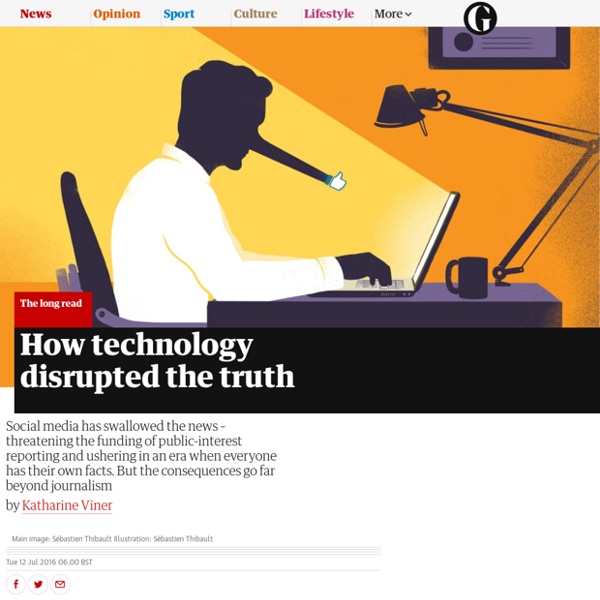 One Monday morning last September, Britain woke to a depraved news story. The prime minister, David Cameron, had committed an “obscene act with a dead pig’s head”, according to the Daily Mail. “A distinguished Oxford contemporary claims Cameron once took part in an outrageous initiation ceremony at a Piers Gaveston event, involving a dead pig,” the paper reported. Piers Gaveston is the name of a riotous Oxford university dining society; the authors of the story claimed their source was an MP, who said he had seen photographic evidence: “His extraordinary suggestion is that the future PM inserted a private part of his anatomy into the animal.” The story, extracted from a new biography of Cameron, sparked an immediate furore. It was gross, it was a great opportunity to humiliate an elitist prime minister, and many felt it rang true for a former member of the notorious Bullingdon Club. Then, after a full day of online merriment, something shocking happened. Does the truth matter any more?

Opinion: the ethics and effectiveness of nudging. Since the publication of 2008’s Nudge by Richard Thaler and Cass Sunstein, policy ‘nudges’ have been in fashion, with smaller interventions aimed at altering public behaviour in a subtle manner being adopted by many governments, including in the UK. Frank Mols looked at this phenomenon in a recent journal article, and argues here that while nudges undoubtedly can be effective, their limitations must be kept in mind. This piece originally appeared on Democratic Audit. The pedlars of fake news are corroding democracy The most interesting question about 2016 is not why the Brexit result and Trump happened, but whether historians will regard both as incidental; whether this will go down as the year democracy revealed itself unworkable in the age of the internet – in which reality, already engaged in a life-or-death struggle with inverted commas, finally gave way to “alt-reality”. The results of these votes were shocking, but not surprising. The rules of capitalism have been gamed by the ruling kleptocracy and a lot of working people are angry. No mystery there. In the past week, however, the collective postmortem – on the left and right of politics – has focused on a concern with far greater long-term impact: the accidental or deliberate propagation of misinformation via social media.

The case for quarantining extremist ideas George Lincoln Rockwell, the head of the American Nazi party, had a simple media strategy in the 1960s. He wrote in his autobiography: “Only by forcing the Jews to spread our message with their facilities could we have any hope of success in counteracting their left-wing, racemixing propaganda!” Campus by campus, from Harvard to Brown to Columbia, he would use the violence of his ideas and brawn of his followers to become headline news. To compel media coverage, Rockwell needed: “(1) A smashing, dramatic approach which could not be ignored, without exposing the most blatant press censorship, and (2) a super-tough, hard-core of young fighting men to enable such a dramatic presentation to the public.” He understood what other groups competing for media attention knew too well: a movement could only be successful if the media amplified their message.

How Facebook Makes Us Dumber Why does misinformation spread so quickly on the social media? Why doesn’t it get corrected? When the truth is so easy to find, why do people accept falsehoods? Cold Reading revealed As a decent mind reader, Derren Brown is capable of telling very personal details about complete strangers. Although they have never met before, Derren knows practically everything about their characters, personal lives, interests, fears and even childhood memories. You can see some examples of his unusual abilities in this video. Explanation: So, how does he do it? Reuters built a bot that can identify real news on Twitter The Bin-Laden raid, the Boston Marathon bombing, Scully’s life-saving landing on the Hudson. News often hits Twitter well before the mainstream media has a chance to catch up. In fact, according to Reuters’ internal research, about 20 percent of all news breaks on Twitter first. But, as this year’s election cycle proves, fake news can break (and spread) just as quickly as the real news can.

Why simple is sexy again Stocksy It’s easy to get self-hating when you start reflecting on just how precious and misspent your attention is on a daily basis. It’s enough to make you feel weak-willed and flimsy, like the smallest breeze has the power to knock your focus right over. Like Climate Denial, Climate Defeatism Threatens Human Survival By Michael Hoexter Part 1 | Part 2 | Part 3 In the next few years, human beings will have the choice whether, on the one hand, to preserve the better shreds of current civilizations or hold onto the possibility to found entirely new, hopefully better civilizations, or, on the other hand, to destroy the possibility for human civilization to continue and head towards human self-extinction. We possess then an awful and, for many, unwanted power at this time. We will be facing opportunities for growth and advancement while at the same time facing compromises that will leave a good number of people dissatisfied and unhappy, as happiness is now conceived.