Chapter 13: The AMAS Test-An Alternative To Nagalase Testing. The AMAS test is useful both as a screening test for early cancer and for monitoring cancer therapies. 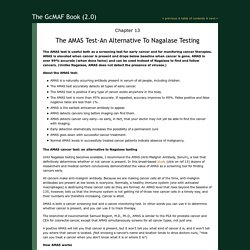 AMAS is elevated when cancer is present and drops below baseline when cancer is gone. AMAS is over 99% accurate (when done twice) and can be used instead of Nagalase to find and follow cancers. (Unlike Nagalase, AMAS does not detect the presence of viruses.) About the AMAS test: Illumina’s Bid to Beat Cancer with DNA Tests. The world’s largest DNA sequencing company says it will form a new company to develop blood tests that cost $1,000 or less and can detect many types of cancer before symptoms arise. 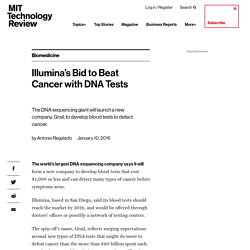 Illumina, based in San Diego, said its blood tests should reach the market by 2019, and would be offered through doctors’ offices or possibly a network of testing centers. The spin-off’s name, Grail, reflects surging expectations around new types of DNA tests that might do more to defeat cancer than the more than $90 billion spent each year by doctors and hospitals on cancer drugs. Illumina CEO Jay Flatley says he hopes the tests could be a “turning point in the war on cancer.” The startup will be based in San Francisco and has raised more than $100 million from Illumina as well as Bill Gates, Jeff Bezos’s venture fund, Bezos Expeditions, and Arch Venture Partners. Illumina will retain majority control. 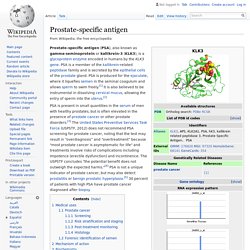 PSA is a member of the kallikrein-related peptidase family and is secreted by the epithelial cells of the prostate gland. PSA is produced for the ejaculate, where it liquefies semen in the seminal coagulum and allows sperm to swim freely.[1] It is also believed to be instrumental in dissolving cervical mucus, allowing the entry of sperm into the uterus.[2] Medical uses[edit] Prostate cancer[edit] Screening[edit] A review commissioned by the U.S. While PSA testing may help 1000 in 1,000,000 avoid death due to prostate cancer, 4000 to 5000 in 1,000,000 would die from prostate cancer after 10 years even with screening. Tumor Markers. A number of tumor markers are currently being used for a wide range of cancer types. 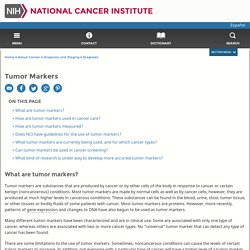 Although most of these can be tested in laboratories that meet standards set by the Clinical Laboratory Improvement Amendments, some cannot be and may therefore be considered experimental. Tumor markers that are currently in common use are listed below. ALK gene rearrangements and overexpression. Laboratory Tests for Cancer - Health Encyclopedia - University of Rochester Medical Center. VIDEO: This is How Banana Peels Could Help Detect Cancer Non-Invasively.

When bananas start getting black spots all over them, they either become banana bread or trash, but the uses don’t stop there! 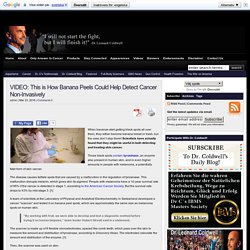 Scientists have actually found that they might be useful in both detecting and treating skin cancer. Those black spots contain tyrosinase, an enzyme also present in human skin, and in even higher amounts in people with melanoma, a potentially fatal form of skin cancer. The disease causes telltale spots that are caused by a malfunction in the regulation of tyrosinase. This malfunction disrupts melanin, which gives skin its pigment. People with melanoma have a 10-year survival rate of 95% if the cancer is detected in stage 1, according to the American Cancer Society. A team of scientists at the Laboratory of Physical and Analytical Electrochemistry in Switzerland developed a cancer “scanner” and tested it on banana peel spots, which are approximately the same size as melanoma spots on human skin. Then, the scanner was used on skin. Sources: [1] Discovery News. Major Study Concludes - 'Cancer Screening Has Never Saved Lives' 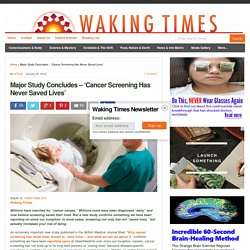 Millions more have been diagnosed “early” and now believe screening saved their lives. But a new study confirms something we have been reporting on since our inception: In most cases, screening not only has not “saved lives,” but actually increases your risk of dying. An extremely important new study published in the British Medical Journal titled, “Why cancer screening has never been shown to “save lives”—and what we can do about it,” confirms something we have been reporting upon at GreenMedInfo.com since our inception, namely, cancer screening has not lived up to its long held promise of “saving lives” because disease-specific reductions in mortality do not equate to reductions in overall mortality. Worse, in some cases overall mortality actually increased because of screening. The article summarizes the problem associated with confusing disease specific with overall mortality reduction, succinctly: News Releases. Sources: Stefan Bossmann, 785-532-6817, sbossman@k-state.edu;and Deryl Troyer, 785-532-4509, troyer@k-state.eduNews release prepared by: Greg Tammen, 785-532-4486, gtammen@k-state.edu Wednesday, Sept. 26, 2012 University researchers develop blood test that accurately detects early stages of lung, breast cancer in humans MANHATTAN -- Researchers at Kansas State University have developed a simple blood test that can accurately detect the beginning stages of cancer. 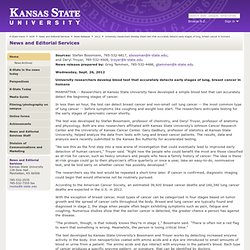 In less than an hour, the test can detect breast cancer and non-small cell lung cancer -- the most common type of lung cancer -- before symptoms like coughing and weight loss start. The researchers anticipate testing for the early stages of pancreatic cancer shortly. The test was developed by Stefan Bossmann, professor of chemistry, and Deryl Troyer, professor of anatomy and physiology. The researchers say the test would be repeated a short time later. "The problem, though, is that nobody knows they're in stage 1," Bossmann said. Breath Test May Spot Lung Cancer. Researchers report test could also differentiate early and late stages of the disease. 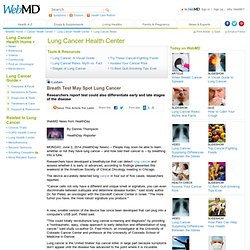 Cancer-Spotting Yogurt May Offer a Cheap, Simple Test. The strips of paper shown here can be used to detect synthetic biomarkers tied to diseases such as colorectal cancer. 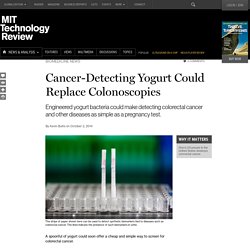 The lines indicate the presence of such biomarkers in urine. A spoonful of yogurt could soon offer a cheap and simple way to screen for colorectal cancer. Sangeeta Bhatia, a professor at MIT, is working to replace costly and uncomfortable colonoscopies and MRIs with a helping of yogurt followed by a urine test—a cheap method that could improve the early diagnosis of colorectal cancer. Bhatia is developing synthetic molecules that can be introduced into the body via yogurt, and will interact with cancer in a way that produces telltale biomarkers.