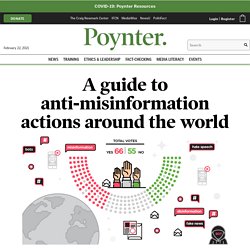 The Electoral Integrity Assurance Task Force is led by the Home Affairs Department and was created amid ongoing warnings from the intelligence community about foreign interference in Australia, the Special Broadcasting Service reported. In February of 2019, an investigation by the ABC revealed that the Australian Electoral Commission notified Twitter and Facebook they must comply with notifications of illegal ads on their platform. In April, they also launched a “Stop and Consider” campaign encouraging voters to pay attention to the sources of their information in light of the federal elections held in May. *This effort does not directly target misinformation, as others have reported. Bahrain. How Librarians Can Fight QAnon (2021) It’s time for a thorough revamping of the purpose of inviting students to engage in inquiry as a civic practice. 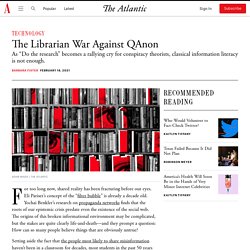 Educators, including librarians who teach, will need to confront and clarify their own beliefs and assumptions about how they know what is real and what isn’t. It will take work. But there are some promising places to start. First, taking a leaf from an organization formed to advise journalists on how to cover a divisive election, educators should consider ways to frame discussions of knowledge through the lens of democracy rather than through partisan political positions. This means being willing to take a strong stand on behalf of ethical research practices, the voices of qualified experts, and the value of information systems that judiciously vet and validate information, along with a willingness to clearly reject the notion that truth is simply a matter of political allegiance or personal choice.

Confronting motivated ignorance (2021) The idea that ignorance is the outcome of a deficit of correct information is persistent, especially for academics working in an environment where learning and the acquisition of new knowledge are highly valued. 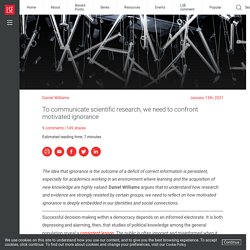 Daniel Williams argues that to understand how research and evidence are strongly resisted by certain groups, we need to reflect on how motivated ignorance is deeply embedded in our identities and social connections. Successful decision-making within a democracy depends on an informed electorate. It is both depressing and alarming, then, that studies of political knowledge among the general population reveal a consistent lesson: The public is often ignorant and misinformed when it comes to basic matters of fact and issues of scientific consensus. Of course, this problem is not new. Plato famously claimed that the ignorance and irrationality that accompany democracies will inevitably push them towards tyranny. It is tempting to search for simple answers to this problem. 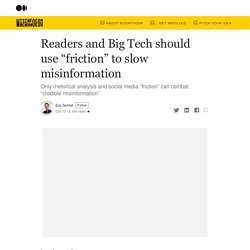 His own colleagues at Yale critiqued the epidemiologist’s conclusions, countering that he relied on weak studies that suggested benefits, but ignored more rigorous studies showing zero benefit and significant potential harm. The authority of the epidemiologist, combined with the perceived trust of a venerable publication such as Newsweek, presents a problem for readers trying to evaluate the credibility of the article.

Readers and consumers of news need better education in rhetorical analysis to defend against information that seems credible on the surface but needs careful checking, or what I call “credible misinformation.” Education and media literacy must include methods of creating “friction” that forces people to slow down long enough to apply rhetorical analysis skills. The op-ed author, Dr. Digital Technology and the Resurrection of Trust - House of Lords report (2020) Committee Chair The Chair of the Committee, Lord Puttnam said: "We are living through a time in which trust is collapsing. 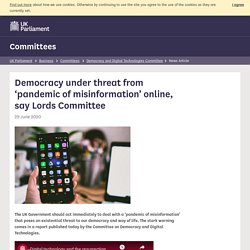 People no longer have faith that they can rely on the information they receive or believe what they are told. Demand for Deceit (2020) Media & information literacy lessons - briefing from Full Fact (2020) Fighting fake news by teaching neuroscience & social psychology (2020) Guest blog: Dr Graham Gardner, Librarian, Abingdon School Introduction From claims over the size of the crowd at Donald Trump’s inauguration to automated “bots” retweeting disinformation generated in the “fake news” factories of Macedonia, the spread of disinformation, misinformation and outright falsehoods had become integral to contemporary life. 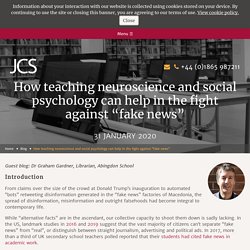 While “alternative facts” are in the ascendant, our collective capacity to shoot them down is sadly lacking. In the US, landmark studies in 2016 and 2019 suggest that the vast majority of citizens can’t separate “fake news” from “real”, or distinguish between straight journalism, advertising and political ads. In 2017, more than a third of UK secondary school teachers polled reported that their students had cited fake news in academic work.

Resistance to information literacy education. The problem with deepfakes? People don't care what's real (2020) One evening earlier this year, my eight-year-old son Jack asked me what a deepfake was. 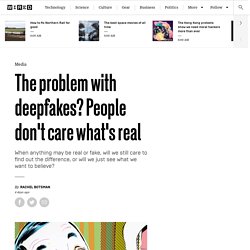 He pointed at the iPad and told me he had heard someone talking about it over lunch at school. Online Harms White Paper (2019) Joint Ministerial foreword The internet is an integral part of everyday life for so many people. 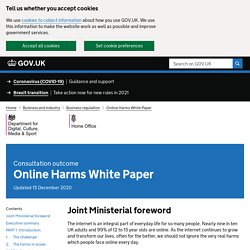 Nearly nine in ten UK adults and 99% of 12 to 15 year olds are online. As the internet continues to grow and transform our lives, often for the better, we should not ignore the very real harms which people face online every day. How America Lost Its Mind. Americans are losing touch with reality. 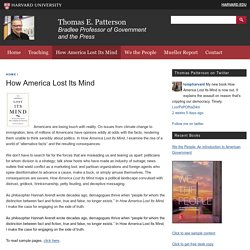 On issues from climate change to immigration, tens of millions of Americans have opinions wildly at odds with the facts, rendering them unable to think sensibly about politics. In How America Lost Its Mind, I examine the rise of a world of “alternative facts” and the resulting consequences. Report on anti-disinformation initiatives - OxTEC (2019) Disinformation Bibliography (2019) Social media, political polarization & disinformation: literature review (2018) Abstract. 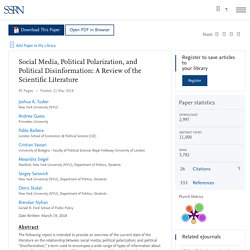 European Commission Action Plan against Disinformation (2018) Tackling online disinformation - a European approach (2018) Malicious Use of Social Media: Case Studies From BBC Monitoring (2018) You Think You Want Media Literacy… Do You? danah boyd (2018) The below original text was the basis for Data & Society Founder and President danah boyd’s March 2018 SXSW Edu keynote,“What Hath We Wrought?” — Ed. Growing up, I took certain truths to be self evident. Democracy is good. War is bad. And of course, all men are created equal. My mother was a teacher who encouraged me to question everything. I loved pushing people’s buttons with these philosophical questions, but they weren’t nearly as existentially destabilizing as the moments in my life in which my experiences didn’t line up with frames that were sacred cows in my community. The funny thing about education is that we ask our students to challenge their assumptions.

The funny thing about education is that we ask our students to challenge their assumptions. Journalism, fake news & disinformation - UNESCO handbook (2018) The Challenge That's Bigger Than Fake News (2017) Since the November 2016 presidential election, coverage of “fake news” has been everywhere. It’s hard to turn on the TV without hearing the term. Google and Facebook have pitched plans for fighting the menace.1 State legislators have even introduced bills to mandate K–12 instruction on the topic.2 Fake news is certainly a problem.

Sadly, however, it’s not our biggest. Fact-checking organizations like Snopes and PolitiFact can help us detect canards invented by enterprising Macedonian teenagers,3 but the Internet is filled with content that defies labels like “fake” or “real.” For every social issue, there are websites that blast half-true headlines, manipulate data, and advance partisan agendas. The Internet dominates young people’s lives. Unfortunately, our research at the Stanford History Education Group demonstrates they don’t.* Between January 2015 and June 2016, we administered 56 tasks to students across 12 states. Fake news. It's complicated (2017) This article is available also in Deutsch, Español, Français and العربية By now we’ve all agreed the term “fake news” is unhelpful, but without an alternative, we’re left awkwardly using air quotes whenever we utter the phrase. The reason we’re struggling with a replacement is because this is about more than news, it’s about the entire information ecosystem.

De partout, les esprits s’agitent pour tenter de trouver des réponses. Did Media Literacy Backfire? – danah boyd (2017) Anxious about the widespread consumption and spread of propaganda and fake news during this year’s election cycle, many progressives are calling for an increased commitment to media literacy programs. Others are clamoring for solutions that focus on expert fact-checking and labeling. Both of these approaches are likely to fail — not because they are bad ideas, but because they fail to take into consideration the cultural context of information consumption that we’ve created over the last thirty years. The problem on our hands is a lot bigger than most folks appreciate.

What Are Your Sources? The Uncertainty Handbook - Climate Outreach (2016) Why are some of us better at handling contradictory information than others? (2016) By Alex Fradera Imagine it: you’re happily surfing through your social media feeds – or what we nowadays call your filter bubble – when some unexpected perspectives somehow manage to penetrate. After you “like” the latest critique of police power, for instance, you come across an article arguing that cracking down on crime can benefit minority neighborhoods. Or, elbowing its way into a crowd of articles celebrating trickle-down economics, you encounter a study showing higher taxes boost growth. What happens next? In new research in Contemporary Educational Psychology, Gregory Trevors and his colleagues looked at how reading conflicting information can push our emotional buttons, and lead us either towards resistance or a chance to learn.

Take the time and effort to correct misinformation (2016) With the election of Donald Trump, his appointment of advisers who are on record as dismissing scientific evidence, and the emboldening of deniers on everything from climate change to vaccinations, the amount of nonsense written about science on the Internet (and elsewhere) seems set to rise. So what are we, as scientists, to do? Most researchers who have tried to engage online with ill-informed journalists or pseudoscientists will be familiar with Brandolini’s law (also known as the Bullshit Asymmetry Principle): the amount of energy needed to refute bullshit is an order of magnitude bigger than that needed to produce it. Is it really worth taking the time and effort to challenge, correct and clarify articles that claim to be about science but in most cases seem to represent a political ideology?

Post-truth and information literacy. Bursting the Filter Bubble: Pro-Truth Librarians in a Post-Truth World. Google, democracy and the truth about internet search. How technology disrupted the truth. One Monday morning last September, Britain woke to a depraved news story. Reuters built a bot that can identify real news on Twitter. The pedlars of fake news are corroding democracy. The most interesting question about 2016 is not why the Brexit result and Trump happened, but whether historians will regard both as incidental; whether this will go down as the year democracy revealed itself unworkable in the age of the internet – in which reality, already engaged in a life-or-death struggle with inverted commas, finally gave way to “alt-reality”.