Talking Language of ‘Change’ Obscures Support for the Status Quo. Earlier in November, I got a press release about a new project launched by liberal media exemplar Huffington Post, in partnership with MIT’s Presencing Institute, on “transforming capitalism”. 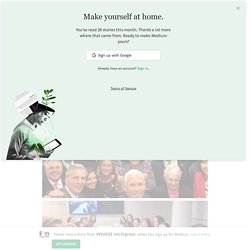 The project announced that HuffPo would provide a radical journalism hub exploring ways to redesign the economy, looking into concepts like “circular economy” and other issues, while doing “online to offline” movement building to facilitate real action in relation to these solutions. It sounded super-exciting. But as I read on, I experienced a sinking feeling. The new HuffPo-MIT project is headed up by Dr Otto Scharmer, senior lecturer at MIT’s Sloan School of Management and co-founder of MIT’s Presencing Institute.

Dr. And despite some positives, Dr. Sanitizing neoliberal deregulatory insanity Scharmer rightly recognizes that there is a fundamental lack of joined up thinking in the approach to the multiple crises facing the planet. Amazingly, Dr. Really? How America Went Haywire. Each camp, conspiracists on the right and on the left, was ostensibly the enemy of the other, but they began operating as de facto allies. 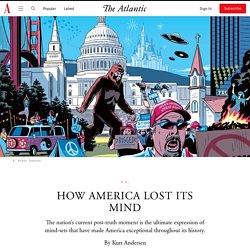 Relativist professors enabled science-denying Christians, and the antipsychiatry craze in the ’60s appealed simultaneously to left-wingers and libertarians (as well as to Scientologists). Conspiracy theories were more of a modern right-wing habit before people on the left signed on. However, the belief that the federal government had secret plans to open detention camps for dissidents sprouted in the ’70s on the paranoid left before it became a fixture on the right. Americans felt newly entitled to believe absolutely anything. I’m pretty certain that the unprecedented surge of UFO reports in the ’70s was not evidence of extraterrestrials’ increasing presence but a symptom of Americans’ credulity and magical thinking suddenly unloosed. A single idée fixe like this often appears in both frightened and hopeful versions. They are interconnected. Modern Climate Denial's Freudian Fingerprints. Myron Ebell bristles at the notion that he is often called a “climate denier.” 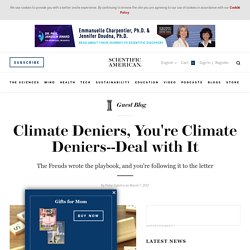 “It’s meant to be offensive,” he said at an early February panel discussion on environmental journalism in the Trump Era. “It’s meant to tie …. some people to Holocaust denial. " The genial, soft-spoken, longtime Washington political operative was part of Team Trump’s EPA transition team and formerly headed the Cooler Heads Coalition, a consortium of conservative and libertarian groups strongly opposed to action on climate change. Not all of Ebell’s ideological soulmates reject the “denier” label.

Steve Milloy, who runs a website called Junkscience.com and is a Fox News contributor, has said, “I just stick with denier. Where proud denier Milloy and denial denier Ebell converge is on their view of environmentalism. Like Climate Denial, Climate Defeatism Threatens Human Survival. By Michael Hoexter Part 1 | Part 2 | Part 3 In the next few years, human beings will have the choice whether, on the one hand, to preserve the better shreds of current civilizations or hold onto the possibility to found entirely new, hopefully better civilizations, or, on the other hand, to destroy the possibility for human civilization to continue and head towards human self-extinction. 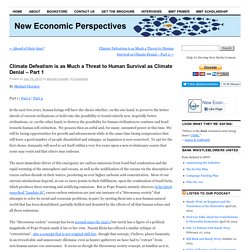 We possess then an awful and, for many, unwanted power at this time. We will be facing opportunities for growth and advancement while at the same time facing compromises that will leave a good number of people dissatisfied and unhappy, as happiness is now conceived. To opt for the first choice, humanity will need to set itself within a very few years upon a new evolutionary course that some may resist and that others may embrace. The “throwaway society” concept has been around since the 1950’s but rarely has a figure of a political magnitude of Pope Francis made it his or her own. How Facebook Makes Us Dumber. Why does misinformation spread so quickly on the social media? 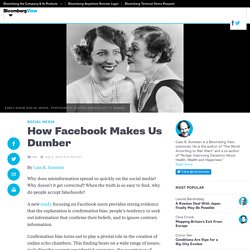 Why doesn’t it get corrected? When the truth is so easy to find, why do people accept falsehoods? A new study focusing on Facebook users provides strong evidence that the explanation is confirmation bias: people’s tendency to seek out information that confirms their beliefs, and to ignore contrary information. Confirmation bias turns out to play a pivotal role in the creation of online echo chambers. How Technology Disrupted The Truth. One Monday morning last September, Britain woke to a depraved news story.

The prime minister, David Cameron, had committed an “obscene act with a dead pig’s head”, according to the Daily Mail. “A distinguished Oxford contemporary claims Cameron once took part in an outrageous initiation ceremony at a Piers Gaveston event, involving a dead pig,” the paper reported. Piers Gaveston is the name of a riotous Oxford university dining society; the authors of the story claimed their source was an MP, who said he had seen photographic evidence: “His extraordinary suggestion is that the future PM inserted a private part of his anatomy into the animal.” The story, extracted from a new biography of Cameron, sparked an immediate furore. It was gross, it was a great opportunity to humiliate an elitist prime minister, and many felt it rang true for a former member of the notorious Bullingdon Club.

The Evolutionary Argument Against Reality.