The Character Interview as a Writing Tool 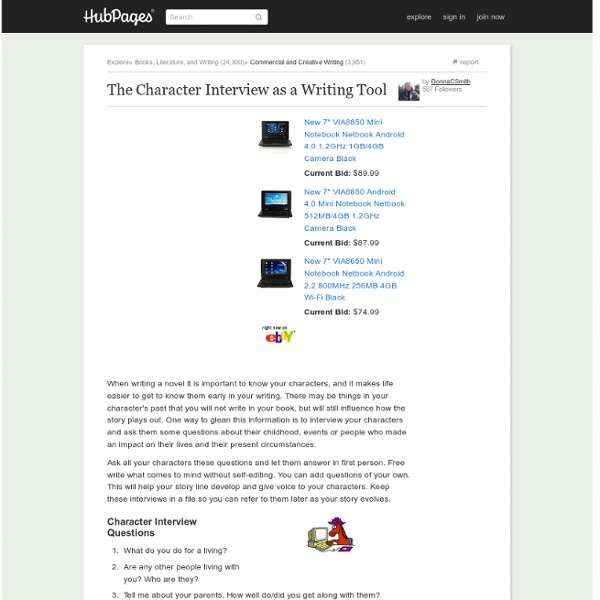 How to Write a Character Sketch: Learning More About Your Characters’ Motivations and Personalities Regardless of the type of writing you are doing, knowing who your characters are and knowing them well will add greatly to your work. Understanding your characters’ personalities through a character sketch helps you to understand where they are coming from and what motivates them. This, in turn, helps you understand what drives all of the action in your work, and the clearer this is, the easier your audiences will be able to connect with your writing. But how do you go about writing a character sketch? Interview Your Characters Perhaps the most straightforward way of getting to know who your characters are and what drives them is by asking them outright in an interview. It may seem like a very obvious or banal exercise, but even minor details will help you understand who your character is. Write a Character Monologue Another fantastic and highly effective way of getting to know your character is by writing a monologue as your character. Write a Day-in-the-Life Character Sketch

3 Types of Character Arcs: Choose the Best for Your Novel How Does Your Character Change? You know your character must change somehow over the course of your novel. But how? And more than that, how do you sync the changes with the external plot? The middle of a novel can suffer from the dreaded “sagging middle” and it’s mainly because you don’t have a firm handle on the character’s inner arc and how it meshes with external events. I’ve found three approaches to the inner arc, each trying to laying out how the character changes. Hero’s Journey: Quest for Inner Change In the Hero’s Journey, laid out so well in Christopher Vogler’s book, The Writer’s Journey, a character receives a Call to Adventure that takes him/her out of the normal and ordinary world into a world where they must quest for something. Melanie as an Example So, we’ve got Melanie who wants more than anything else to get her mother’s approval, but can’t because her mom’s a chef and Melanie can’t cook worth a flip. Iron Sharpens Iron – Friendships Back to Melanie: Flawed Way of Coping

CALLIHOO Writing Helps--Feelings Table Character Feelings You can describe your character's feelings in more exact terms than just "happy" or "sad." Check these lists for the exact nuance to describe your character's intensity of feelings. SF Characters | SF Items | SF Descriptors | SF Places | SF EventsSF Jobs/Occupations | Random Emotions | Emotions List | Intensity of Feelings How to Write a Character From Start to Finish The best fiction is about a character who changes in some significant way. The selfish brute learns to put others first. The woman marrying for money decides to marry for love. The career ladder climber learns to cut back on his hours to enjoy his family. We love to see characters transformed. —by Jeff Gerke Most of the time, main characters in fiction are changing for the better. But there’s also room for characters who change for the worse. Perhaps most intriguing of all is a “bad” character who flirts for a while with the idea of being good, but then decides that his true self is on the dark side of the street. Of course, not every story has to be about a character who changes. Whether your protagonist ultimately turns toward or away from the light will be up to you, but we’ll look at ways to send her on a journey in which she’s transformed. The Inner Journey In fiction terms, a character’s transformation is called his inner journey or character arc. The Nexus The Seeds of Change

25 Ways To Fuck With Your Characters - StumbleUpon As storyteller, you are god. And to be frank, you’re not a particularly nice god — at least, not if you want your story to resonate with readers. A good storyteller is a crass and callous deity who treats the characters under his watchful eye like a series of troubled butt-puppets. From this essential conflict — storyteller versus character — a story is born. Put differently, as a storyteller it’s your job to be a dick. It’s your job to fuck endlessly with the characters twisting beneath your thumb. And here’s 25 ways for you to do just that. 1. Gods have avatars, mortal or semi-mortal beings that exist on earth to embody the deity’s agenda. 2. The audience and the character must know the stakes on the table — “If you don’t win this poker game, your grandmother will lose her beloved pet orangutan, Orange Julius.” 3. Impossible odds are a powerful way to fuck with a character. 4. Drop the character smack dab between two diametrically opposed choices. 5. 6. This one? 7. 8. 9. 10. 11. 12.

Character Trait Chart Character Trait Chart and Personality Components It can sometimes be helpful to make a Trait Chart for each character. This is especially helpful during the early stages of character development, before the character becomes as real to you as your mother. There are several charts of this sort available, some extremely detailed and some containing only facts and figures. I've tried to make one that includes the most important traits to help you visualize your character, both physically and emotionally. To use this chart, print it out and make a copy for each of your characters. Full name - a character's name is very important. Besides the character's official name, we also need to know what he is called (and, perhaps, what he prefers to be called). Date of Birth/Age - we should carefully consider assigning our character a birthday. Height - this doesn't need to be specific. Hair - keep in mind the character's ethnic background in assigning hair and eye color. Smell - everyone has a smell.

Top 10 Tricks to Make your Villain Stand Out Welcome back to the column that breaks down gaming into what’s really important, ten things at a time! Any story arc needs a good villain. The best big bads are more than just another devil or vampire or dragon. 1. Why do people follow this villain? 2. The villain should have a single overriding goal that drives all his or her actions. 3. Along with the goal, place concrete steps the villain needs to take to reach the goal. 4. The villain should be making progress if nobody is stopping him or her. 5. Give your villain a weakness the adventurers can figure out and exploit. 6. Avoid faceless or generic threats. 7. Make the villain’s presence known in every corner of the campaign. 8. One of the best ways to make the villain’s presence known is by reusing symbols and calling cards. 9. Take note every time the adventurers fail to stop the villain, or let a part of its plan succeed. 10. Your villain will be more well-rounded if there are some things he or she won’t do. Written by loganbonner