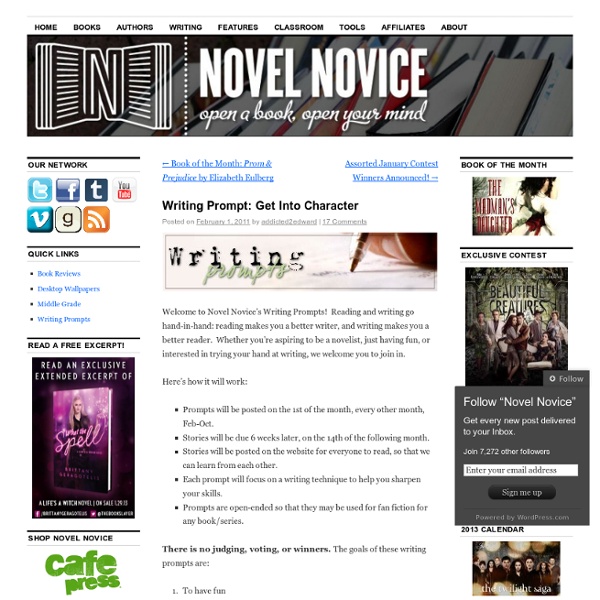 Welcome to Novel Novice’s Writing Prompts! Reading and writing go hand-in-hand: reading makes you a better writer, and writing makes you a better reader. Whether you’re aspiring to be a novelist, just having fun, or interested in trying your hand at writing, we welcome you to join in. Here’s how it will work: Prompts will be posted on the 1st of the month, every other month, Feb-Oct.Stories will be due 6 weeks later, on the 14th of the following month.Stories will be posted on the website for everyone to read, so that we can learn from each other.Each prompt will focus on a writing technique to help you sharpen your skills.Prompts are open-ended so that they may be used for fan fiction for any book/series. There is no judging, voting, or winners. To have funTo improve your writing skillsTo share your writing with others On to this month’s prompt…. The Focus: Ahhh…the age-old writing debate — what’s more important: characters or plot? Voice Every character has a distinct “voice”. World View Related:  creating characters

Character Trait Chart Character Trait Chart and Personality Components It can sometimes be helpful to make a Trait Chart for each character. This is especially helpful during the early stages of character development, before the character becomes as real to you as your mother. To use this chart, print it out and make a copy for each of your characters. Full name - a character's name is very important. Besides the character's official name, we also need to know what he is called (and, perhaps, what he prefers to be called). Date of Birth/Age - we should carefully consider assigning our character a birthday. Address - this can be as detailed or as vague as you wish, but it should answer a few questions: does the character live in a large city, the suburbs, a small town or deep in the country? Height - this doesn't need to be specific. Weight/Body Build - again, we don't really need to know a character's exact weight, only if he or she is stocky, slender or "had a figure that . . ." Smell - everyone has a smell.

Creating a character profile When you get an idea for a short story or a novel you probably get the basic idea of the characters with it. But in order to build believable characters you need more than just a basic idea of them. You need to really them. The easiest way to flesh out a character is with a character profile, so get out a blank sheet of paper and follow the sample profile below. NAME: Put your characters full name - first, last, and any nicknames that he goes by. BIOGRAPHY: Write a description of your character's life; past and present. AGE: If you don't know the exact age of your character then you can put it's approximation, such as late thirties, mid-twenties etc. HEIGHT: How tall is your character? WEIGHT: You probably won't know your character's exact weight, but I'm sure you can guess its approximate one. BODY TYPE: Is he wiry and agile, or does he work out and his body is the proof? FACE TYPE: Is your character baby faced, or does he have a sharp, chiseled bone structure?

Questionnaires for Writing Character Profiles - Creative Writing Help - StumbleUpon Enter your e-mail to get the e-book for FREE. We'll also keep you informed about interesting website news. "I have searched the web and used different worksheets, but none have come close to your worksheets and descriptions of (what to do and what not to do). Both courses I have taken have with Creative Writing Now have been amazing. "As usual - I already love the course on Irresistible Fiction, rewriting a lot and improving greatly even after the first lesson. “Essentials of Fiction proved that I could indeed write and I wrote every day, much to my boyfriend's dismay (waa sniff).” - Jill Gardner "I am loving the course and the peer interaction on the blog is fantastic!!!" "I'm enjoying the weekly email course, Essentials of Poetry Writing. "Thank you for all the material in this course. "I was pleasantly surprised at the quality of the lessons and feel they were very helpful in introducing new ideas and perspectives to my writing. "Thanks very much for this course. "Thank you so much!!

Writing Realistic Injuries Quick Contents Introduction General remarks What's normal?Reactions to injury - including emotional reactions, fainting and shock. Minor injuries - such as bruises, grazes and sprains Head injuries - from black eyes to severe concussions Broken bones Dislocated jointsCutting and Piercing - for various locations, including blood loss symptoms and figures. Introduction Characters climbing cliffs with broken arms or getting knocked out for an hour or so and then running around like nothing happened, bug me. I’m not any sort of medical expert - research for this article has come from a variety of sources from medical texts to personal experience – (I’m just a teeny bit accident prone…) I do historical reenactment and a large part of information here comes from the ‘traumatic injury’ (or ‘the nasty things that can happen to you in combat’ information we give the public and new members to make them go ‘urggh , I’m glad this isn’t for real’. Back to Quick Contents General Remarks What’s Normal…?

Seven Common Character Types Seven Common Character Types by Terry W. Ervin II Fiction writers employ a variety of characters while weaving their tales. Beyond the standard definitions of protagonist (the main character in a literary work) and antagonist (the main character or force that opposes the protagonist in a literary work), recognizing the types of characters and the parts they play while reading an interesting story can add to the experience. In addition, a fuller understanding of the character types and their uses can increase a writer’s effectiveness in weaving his own fictional tales. Confidante- someone in whom the central character confides, thus revealing the main character’s personality, thoughts, and intentions. Example: In a story, Melvin Sanders is a detective on the trail of a serial killer. In this example Chops is a confidante. Dynamic Character - a character which changes during the course of a story or novel. In this example Ebenezer Scrooge is a dynamic character. Copyright © Terry W.

Top Questions for Fictional Characters -- Questions to Help in Creating Characters Creating the more complex round characters takes time -- time spent thinking about how your characters look, where they're from, and what motivates them, for instance. The questions below provide structure to this all-important thought process. While the reader will not need to know all the details, it's important that you do. 1. Michael Adams ("Anniversaries in the Blood"), the novelist and writing professor, believes that setting is the most important element of any story. 2. In a similar vein, where did your character's life begin? 3. Though this might seem like an obvious question, it's important to make a clear decision about this before you begin writing -- otherwise, it's impossible to get the details right. 4. Would a rose by any other name smell as sweet? 5. Is your character tall enough to see over the heads of a crowd at a bar or to notice the dust on the top of his girlfriend's refrigerator? 6. 7. 8. 9. Relationships -- how people interact with others -- reveal character.

Character Chart FAVORITES Color: Music: Food: Literature: Expressions: Book: Quote: Expletive(s) (swears): Mode of transportation: HABITS Smokes: What? How often? Drinks: What? SELF-PERCEPTION One word character would use to describe self: One paragraph description of how character would describe self: What does character consider best physical characteristic? Immediate goal(s): Long range goal(s): How does character plan to accomplish goal(s)? How character react in a crisis (calm/panic/etc.)? Jewelry? Owns a computer? © (c ) copyright 1990-2011 Rebecca Sinclair ALL RIGHTS RESERVED Authors Note: I worked hard on this. ~ Permission is granted to LINK TO the Fiction Writers Character Chart. ~ Permission is granted to print out a copy of the Fiction Writers Character Chart FOR PERSONAL USE ~ Permission is NOT granted to copy and/or use the Character Chart in print and/or electronic form (including the internet) without express written permission)

10 Days of Character Building: A Day in the Life This is Day 2 of 10 Days of Character Building The day in the life approach to developing a character is focused on describing a normal day in the character’s life before something important happens to change it. Most central characters begin a story in their normal world. The beauty of analyzing a character’s day is that there are always opportunities to delve as deeply into their actions as you want. As you assemble a person’s day you get a good idea of their traits and flaws. When approaching the daily routine, you can go a number of ways. How to Write a Character Sketch: Learning More About Your Characters’ Motivations and Personalities Regardless of the type of writing you are doing, knowing who your characters are and knowing them well will add greatly to your work. Understanding your characters’ personalities through a character sketch helps you to understand where they are coming from and what motivates them. This, in turn, helps you understand what drives all of the action in your work, and the clearer this is, the easier your audiences will be able to connect with your writing. But how do you go about writing a character sketch? There are numerous ways to go about it. What follows is a look at a few different methods for exploring your characters. Interview Your Characters Perhaps the most straightforward way of getting to know who your characters are and what drives them is by asking them outright in an interview. It may seem like a very obvious or banal exercise, but even minor details will help you understand who your character is. Write a Character Monologue Write a Day-in-the-Life Character Sketch

Seven Keys To Unforgettable Characters | Bob Mayer's Blog Think of your favorite book. What the first thing that comes to mind when you bring it up in your brain? I’m willing to bet, it’s the characters. Most people relate to people, not things. Characters bring emotion to story, and emotion is what attaches readers to books. Here are some of the key lessons I’ve learned about character development over the years, which I’ll be covering in more detail next month in the Write It Forward on-line class on character: 1. 2. 3. What do you want? 4. What do you want? 5. Archetypes. 6. 7. These are just a few of the lessons I’ve learned about character over the years. Write It Forward! Like this: Like Loading... West Point Graduate, former Green Beret and NY Times bestselling author Bob Mayer has had over 50 books published.