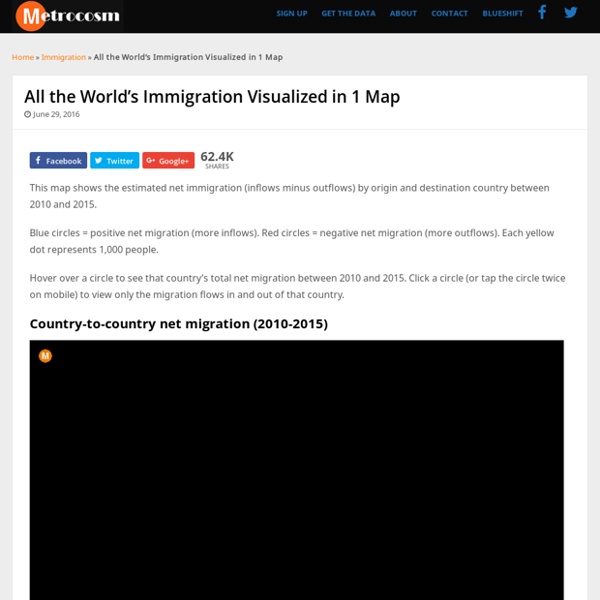 This map shows the estimated net immigration (inflows minus outflows) by origin and destination country between 2010 and 2015. Blue circles = positive net migration (more inflows). Red circles = negative net migration (more outflows). Each yellow dot represents 1,000 people. Hover over a circle to see that country’s total net migration between 2010 and 2015. Click a circle (or tap the circle twice on mobile) to view only the migration flows in and out of that country. Country-to-country net migration (2010-2015) The data for this map comes from the U.N. Full screen version / Youtube video Immigration: the new Godwin’s Law If you’re not familiar with Godwin’s law, it is an old internet adage that states, “As an online discussion grows longer, the probability of a comparison involving Nazism or Hitler approaches 1.” Lately, I’ve found a similar principle applies to immigration. Immigration has always been an important and frequently debated issue. Who is migrating from where to where? Syria Syria

OpenStreetMap Where is this? Reverse Directions Welcome to OpenStreetMap! OpenStreetMap is a map of the world, created by people like you and free to use under an open license. Hosting is supported by UCL, Bytemark Hosting, and other partners. Every Plane Flight in the World Over One Year [Animated Map] One Year of Global Air Traffic (Full Screen Version) Select a country to view only that country’s incoming and outgoing air traffic. Built with Blueshift / data from World PopEmbed this on map on your website This globe displays one year of global air passenger traffic. The data comes from modeled estimates compiled for the Vector-borne Disease Airport Importation Risk project (available for download at WorldPop). In 2010, the year for which the data was modeled, there were roughly 30 million commercial flights around the world carrying about 2.8 billion passengers.

The problem with maps. Mandatory Accompanying Playlist The World The world is round. Google says so. The problem is, spheres can be hard to get your head around… Imagine we want to see a map of the whole world. We might try something like this. These moving photos of the refugee crisis just won a Pulitzer Prize Warning: Some people may find some of the photos in this article distressing Gripping images of Europe's refugee crisis won the 2016 Pulitzer Prize for breaking news photography on Monday. The judging committee said that the joint first place prize was awarded to Mauricio Lima, Sergey Ponomarev, Tyler Hicks and Daniel Etter's work for The New York Times and the photography staffers of news agency Thomson Reuters for photos that "captured the resolve of refugees, the perils of their journeys and the struggle of host countries to take them in."

Mapping the world at war An interactive map highlights the shocking number of ongoing conflicts around the world While a handful of conflicts dominate international newswires, a host of bloody, unresolved wars continue to be played out across the globe to devastating human cost, underreported and, in certain instances, largely unnoticed by the wider world. These might not be seismic geopolitical events of the magnitude of the ongoing conflict in Syria, nor generally have Anglo-American interventions in the conflict zone to pique the interest of the international media. But the devastation they have wrought has been just as shocking. A new interactive map, compiled by humanitarian news agency IRIN, charts the spread of conflicts across the globe.

Mapping the Flow of International Trade According the UN’s Comtrade database, the global market for imported goods totaled $15.6 trillion in 2015. This map shows where those goods came from and where they went, each dot representing $1 billion in value. Select a country to see the flow of goods in and out of that country. The Flow of International Trade (full screen) Full screen version / Youtube With the election of Donald Trump, international trade is suddenly at the top of the U.S. agenda. Migrations in Motion - The Nature Conservancy As climate change alters habitats and disrupts ecosystems, where will animals move to survive? And will human development prevent them from getting there? This map shows the average direction mammals, birds, and amphibians need to move to track hospitable climates as they shift across the landscape. How? Researchers from University of Washington and The Nature Conservancy modeled potential habitat for 2954 species using climate change projections and the climatic needs of each species.