Story Place - Culture Victoria. Coronavirus: urban design must adapt to COVID-19 fears, risks. News, latest-news, The long-term impacts of coronavirus on our cities are difficult to predict, but one thing is certain: cities won't die. 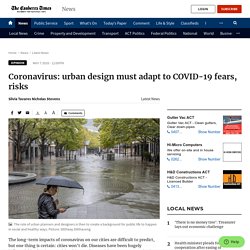 Diseases have been hugely influential in shaping our cities, history shows. 'It took 8000 hours': A puzzle of Melbourne's heart is spreading lockdown city love. Ms Clarke met Mr Brownlie "by serendipity": "He was sitting on a milk crate in the city sketching buildings". 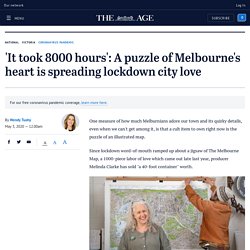 Since lockdown word-of-mouth ramped up about a jigsaw of The Melbourne Map, a 1000-piece labor of love , producer Melinda Clarke has sold a 40-foot container worth of puzzles. "He said, 'I could probably do that in about four to six months'. I just laughed, I knew it would take at least a year. " The map that became the puzzle is so detailed it took two Mr Brownlie two and a half years. Digital colourist Sean Rodwell made each building, tram or street feature, "right down to the buoys on the Yarra" its true-to-life shade. One of the puzzle's charms for those boxed up at home is that the pieces construct not only images of the grand things we know and love, but the granular.

Icons old and new are there, including the Royal Botanic Gardens, Rod Laver Arena, the Melbourne Star, Bunjil the sacred eagle and the "cow in a tree" sculpture. "Dogs and cats seem to gravitate to it. Place & Space: Table of Contents. PLACENESS, PLACE, PLACELESSNESS. The cover of my tattered, well-used 1974 edition of Yi-fu Tuan’s Topophilia. 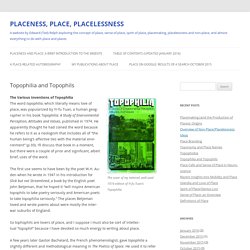 The Various Inventions of TopophiliaThe word topophilia, which literally means love of place, was popularized by Yi-fu Tuan, a human geographer in his book Topophilia: A Study of Environmental Perception, Attitudes and Values, published in 1974. He apparently thought he had coined the word because he refers to it as a neologism that includes all of “the human being’s affective ties with the material environment” (p.93). I’ll discuss that book in a moment, but there were a couple of prior and significant, albeit brief, uses of the word. The first use seems to have been by the poet W.H. Auden when he wrote in 1947 in his introduction for Slick but not Streamlined, a book by the English poet John Betjeman, that he hoped it “will inspire American topophils to take poetry seriously and American poets to take topophilia seriously.” 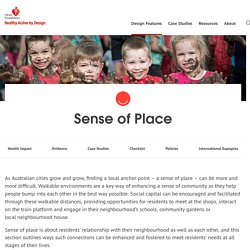 These feelings are related to the physical characteristics of the environment and are developed over time. The physical setting, activities undertaken within that setting, and attachment come together to create a sense of place. [1] Specifically, people are drawn to and want to be part of places to which they have positive feelings. Key attributes that contribute to ‘place making’ include: [1] This-is-marrickville-not-mirvac-ville-sydney-councils-take-back-planning-powers-20180728-p4zu5c. Burden of disease Overview. Crime Statistics Agency Victoria. The information outlined in this section represents all offences recorded in the Victoria Police Law Enforcement Assistance Program (LEAP), where Victoria Police have recorded a crime prohibited by criminal law. 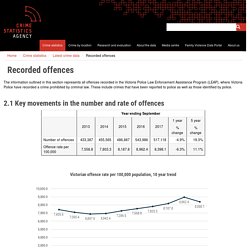 These include crimes that have been reported to police as well as those identified by police. 2.1 Key movements in the number and rate of offences Victorian offence rate per 100,000 population, 10 year trend 24 month trend testing The CSA uses a 24 month trend test on each offence subdivision and Local Government Area to highlight changes that are statistically significant. Over the last 24 months, the major offence categories that showed significant upward trends were: Sexual offences (up 17.9% from 12,351 to 14,564)Dangerous and negligent acts endangering people (up 7.8% from 5,539 to 5,972) The major offence categories that showed significant downward trends were: All other major offence categories showed a stable trend over the last 24 months. 2.3 Regional profile. Index of /wp-content/uploads. Resilience. Deakin University Library. 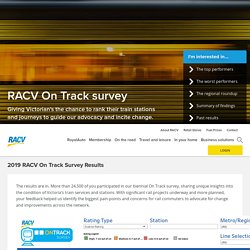 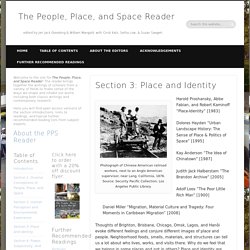 Anderson describes how race and class privilege infused the social production of space in late 19th-century Vancouver, Canada. Anderson’s work examines the variety of material and social practices through which both racialized space and constructed notions of racialized difference were produced and naturalized. Her research looks at how “Chinatowns” were fabricated in many cities by white Europeans and Anglo- Americans in the 19th century. She focuses her careful examination on Vancouver to detail how those in power delineated difference and limited people marked as other—in this case the Chinese population—through the spatializations of cultural norms and values. This included labeling their cultural activities such as lodging, eating, gambling, and opium use as unsanitary or immoral, while refusing to extend sanitation services or employment to these communities.

Sometimes identity and place are so tightly bound that it is hard to separate them. About Places Journal. Sense of place2. Cross headwatersXII. Sense of Place – The Nature of Cities. Different people perceive the same city or neighborhood in different ways. 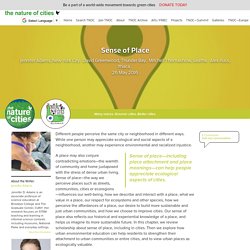 Melbourne_PS_Ordinance. Healthy Spaces & Places. 'Cover' in Health of People, Places and Planet by Colin D. Butler, Jane Dixon and Anthony G. Capon (eds) Making healthy places : designing and building for health, well-being, and ...: Deakin University Library Search. What is Sense of Place? - Thejas Jagannath - Medium. A sense of place is when people feel a longing of belonging towards a place or a city they are familiar with. 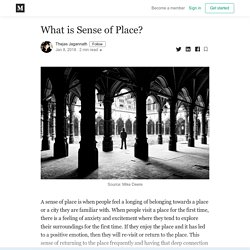 When people visit a place for the first time, there is a feeling of anxiety and excitement where they tend to explore their surroundings for the first time. If they enjoy the place and it has led to a positive emotion, then they will re-visit or return to the place. What is Placemaking? What if we built our communities around places? 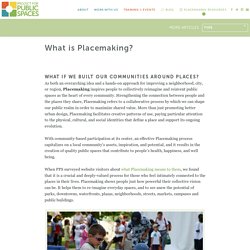 As both an overarching idea and a hands-on approach for improving a neighborhood, city, or region, Placemaking inspires people to collectively reimagine and reinvent public spaces as the heart of every community. Strengthening the connection between people and the places they share, Placemaking refers to a collaborative process by which we can shape our public realm in order to maximize shared value. More than just promoting better urban design, Placemaking facilitates creative patterns of use, paying particular attention to the physical, cultural, and social identities that define a place and support its ongoing evolution.

With community-based participation at its center, an effective Placemaking process capitalizes on a local community’s assets, inspiration, and potential, and it results in the creation of quality public spaces that contribute to people’s health, happiness, and well being. The Soundscapes of Australia by Fiona Richards. Community Indicators Victoria. Home. - Health of People, Places and Planet - ANU. Foreword Stephen V. Boyden This remarkable collection of papers bears witness to the breadth, depth and originality of Tony McMichael’s outstanding contribution to the health sciences over the past four decades. Appropriately, contributions range from discussions of the results of epidemiological studies on specific health issues, many of which McMichael worked on himself, to the importance of a systems approach to epidemiology, and even to some philosophical issues such as how important the future really is.

Many papers refer to or focus on an area that was of special interest to McMichael over recent decades – the impacts of climate change on human health. Chapter 6. Love, loss and ‘going Home’: the intimate lives of Victorian settlers. In May 1885, Arbella Winter Cooke received a letter from her son Sam, who was on an extensive honeymoon in Europe. He and his wife, Alice, were having a wonderful time and liking Florence ‘very much’ but, Sam assured his mother, she need not fear that ‘it or any other place will charm us away from Victoria’. With a flourish, he added, ‘We are looking forward to our return Home.’ Samuel Winter Cooke (1847–1929) had been taught from early childhood that the great European cities on his tour were the centres of civilisation and culture. From the cosmopolitan city of Florence, however, he wrote to reassure his mother that all he longed for was held in the word ‘home’. Perils of place: identifying hotspots of health inequality.

Perils of place: identifying hotspots of health inequality by Stephen Duckett Listen to a podcast of the authors discussing the report Hospitalisation rates for diabetes, tooth decay and other conditions that should be treatable or manageable out of hospital show how Australia’s health system is consistently failing some communities. The Art of Geography. What is the sense of place? It is a combination of characteristics that makes a place special and unique. Sense of place involves the human experience in a landscape, the local knowledge and folklore. Sense of place also grows from identifying oneself in relation to a particular piece of land on the surface of planet Earth. Another way of looking at sense of place is contrast: places like strip malls have little sense of place because they more or less all look very similar, often have no name and no one who wants to spend any time there or write anything about them.

Community and Quality of Life: Data Needs for Informed Decision Making. Downs, A. 2001. The Future of U.S. Place attachment. In Himalayan Buddhist culture, the white silk or satin scarf is a sign of blessing. Welcome to the OPENspace Research Centre Website, Edinburgh Art College. Parks and open spaces. Design findings and recommendations. I'DGO. Getting from sense of place to place-based management: An interpretive investigation of place meanings and perceptions of landscape change — Experts@Minnesota. The human measure of space: review of “Space and Place: Humanistic Perspective”, by Yi-Fu Tuan – The Cobble And The Frame. OECD Better Life Index. How’s Life? Australia performs very well in many measures of well-being relative to most other countries in the Better Life Index. Australia ranks at the top in civic engagement and above the average in income and wealth, environmental quality, health status, housing, jobs and earnings, education and skills, subjective well-being, and social connections.

'Ordinary' Australia probably isn't where you think it is. The Science of Stress and How Our Emotions Affect Our Susceptibility to Burnout and Disease. I had lived thirty good years before enduring my first food poisoning — odds quite fortunate in the grand scheme of things, but miserably unfortunate in the immediate experience of it. I found myself completely incapacitated to erect the pillars of my daily life — too cognitively foggy to read and write, too physically weak to work out or even meditate.

Virtual Sense of Place: Terrain.org and the Online Nexus of Literature and Environment - Ecological Media Position by Simmons B. Buntin. AP Human Geo: Chapter 4 Vocabulary Flashcards. Improving Wellbeing through Urban Nature (IWUN) The Human–Nature Relationship and Its Impact on Health: A Critical Review.

Does writing books still matter in an era of environmental catastrophe? A few years ago, I found myself in Gunaikurnai country, in a place more recently given the lusty name Paradise Beach. I was driven there by my own strong settler/coloniser impulse, after googling a list of “cheapest beachside addresses in Australia”. My notion was that, given the unlikeliness of my owning an everyday home, I could skip straight to “beach house”.

Apo nid277911 1413056. Theconversation. The built and natural environments are now changing so rapidly that our language and conceptual frameworks have to work overtime just to keep up. Under the intertwined impacts of global development, rising population and global warming, with their accompanying changes in climate and ecosystems, there is now a mismatch between our lived experience of the world, and our ability to conceptualise and comprehend it. No longer is the “wisdom of the elders” relevant to how we should live in the here and now, and this loss of historically informed knowledge has implications for social cohesion. Psychoterratica – Glenn A Albrecht. Healthearth ... healthearthealthearthealthearth: Solastalgia: A new psychoterratic condition.