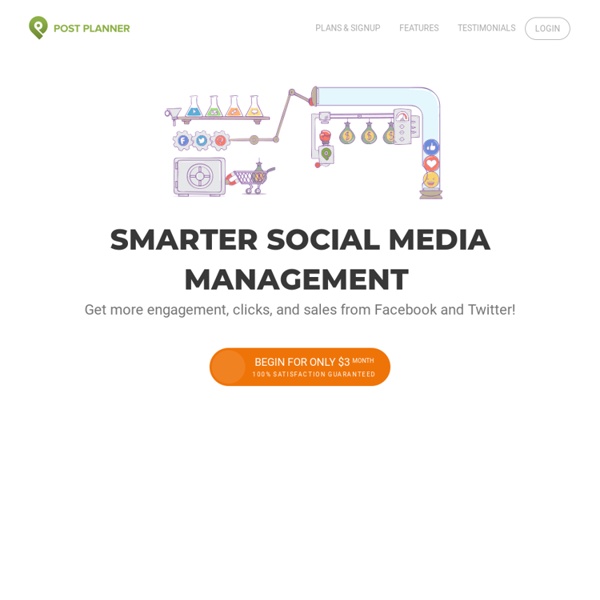 Facebook Hashtags: Quick Tips for Small Business Owners - League Computer Solutions and Social Media Now that hashtags are live on Facebook, you need to consider using them (strategically) in your social media marketing. Hashtags are used on numerous social networks (Twitter, G+, Facebook, Instagram) and offer marketers an easy way to be seen by more people. So here are a few tips to get you started: What is a hashtag? Facebook announces Facebook Media — a hub for media outlets and others Facebook announces Facebook Media — a hub for media outlets and others For advertisers looking for support or guidance, there is Facebook for Business. Now, for members of the media (as well as public figures and other organizations like nonprofits), there’s Facebook Media. The social network today announced Facebook Media, a similar resource for media outlets looking for more efficient ways to utilize Facebook.

Want Better Facebook Engagement? Stop What You're Doing Social Media Published on January 11th, 2013 | by Colleen Corkery When it comes to marketing your business or brand on Facebook, you think you know what works for engaging your followers… but it turns out, you might not. Buddy Media analyzed user engagement on more than 1,800 Facebook Pages from some of the world’s largest brands. The results? Facebook Rolls Out Billing Info “Autofill” For Simpler Checkout To 450K Ecwid E-Commerce Merchants Facebook today announced a partnership with e-commerce site platform Ecwid to let its 450,000 merchants easily integrate Autofill With Facebook, a feature that lets customers pull in credit card, billing, and shipping info they’ve stored on Facebook. At its F8 developer conference, the social network also announced a test of an extension to Autofill that lets JackThreads customers to pull in promo codes if a user clicks through from a promo code-filled Facebook ad. Facebook started testing the Autofill API in August with JackThreads, a clothes shopping app. In September it announced it was partnering with PayPal, Braintree (now part of PayPal), and Stripe to integrate Autofill with their payment processing backends.

Facebook Timeline: 9 Best Practices for Brands The Modern Media Agency Series is presented by IDG. IDC Infographic: Big Data Market to Grow 40% Per Year. Technology vendors of all sizes across hardware, software, and services stand to gain in the explosion of big data spending over the next three years. IDC predicts Big Data will become a $17 billion market. See what’s hot…

9 Facebook Marketing Strategies to Build Super Fans Are you looking to attract high-quality and loyal fans to your Facebook page? Without quality fans, your Facebook marketing efforts can fizzle out quickly. Keep reading to discover nine ways you can build loyal fans who’ll love your business. In a recently published infographic, Moontoast illustrates a Facebook fan’s journey from a “Potential Fan” all the way to a “Super Fan.” The image below shows a fan’s progression. Moontoast shows how a fan's level of interest with a brand can move from light to heavy engagement.

This Tool Perfectly Crops Your Cover Photo for Facebook Timeline The panoramic photo that now graces the top of every Facebook profile is pretty, but it's a far cry from practical. Most cameras don't take photos that fit into it. Photo startup Aviary announced on Thursday that it would address this problem with a crop tool designed specifically for the Facebook Timeline cover photo. The tool is part of a new Facebook photo editing app the company launched in January. To use it, you'll need to approve the app. How to Sell Products via Your Facebook Page Ever wished you could directly sell your products and services from within Facebook? If so, this post is for you. I decided to dig in and research the current landscape thoroughly, both to better understand the lay of the land and to save you the research hassle.

FACEBOOK FAN GATE 68 Flares Twitter 2 Facebook 14 Buffer 15 Google+ 7 LinkedIn 30 inShare30 68 Flares × Ever since Facebook had a redesign, many marketers have voiced their opinions about how ineffective ‘fan-gating’ or ‘like-gating’ will be as they aren’t able to set them as the default landing page anymore. That is true; however the thought of it not being effective is far from being true. What is a fan gate? A fan gate or a ‘like gate’ allows your page to display different contents to those who are not fans and to those who are fans. Imagine a house with a gate that stops someone from getting into your house.

How do you use Fan Gates? Hi Emily, You can find an explanation of the different options for adding content in this article from our support center, which was written for general setup of our Custom Tab (HTML FanGate) app, but the information is more or less the same (it explains the difference between the options for URL, Image, and HTML content). It sounds like you may be referring to the “Default Landing Tab” functionality that allowed admins to specify a tab that would automatically be displayed to non-fans when they visited the Page. Unfortunately, that isn’t something that can be done anymore because Facebook removed the option to set a “Default Landing Tab” when they made the switch to Timeline format for Pages.