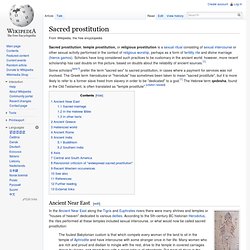 Scholars have long considered such practices to be customary in the ancient world; however, more recent scholarship has cast doubts on this picture, based on doubts about the reliability of ancient sources.[1] Some scholars[who?] Prefer the term "sacred sex" to sacred prostitution, in cases where a payment for services was not involved.

The Greek term hierodoulos or "hierodule" has sometimes been taken to mean "sacred prostitute", but it is more likely to refer to a former slave freed from slavery in order to be "dedicated" to a god.[1] The Hebrew term qedesha, found in the Old Testament, is often translated as "temple prostitute". [citation needed] Students at a Nebraska High School Can Now Pose With Guns in Their Senior Portraits. Shutterstock Seniors at Broken Bow High School in Nebraska have been granted their God-given right to pose with guns for their upcoming senior portraits, just as long as the photos are taken off campus and done "tastefully. 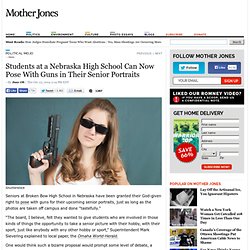 " “The board, I believe, felt they wanted to give students who are involved in those kinds of things the opportunity to take a senior picture with their hobby, with their sport, just like anybody with any other hobby or sport,” Superintendent Mark Sievering explained to local paper, the Omaha World-Herald. One would think such a bizarre proposal would prompt some level of debate, a modicum of sane opposition! Addicting Info – School Asks Parents, ‘Does Your Son Have To Be Buddhist?’

How would you feel if this was happening every day while taking your child to school? 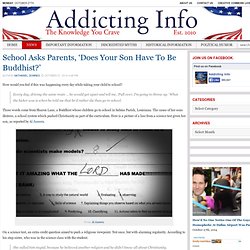 Every day, driving the same route … he would get upset and tell me, ‘Pull over, I’m going to throw up.’ What the kicker was is when he told me that he’d rather die than go to school. Those words come from Sharon Lane, a Buddhist whose children go to school in Sabine Parish, Louisiana. Scalia’s utter moral failure: How he destroys any claim to a superior system of justice. While my views on the morality of the death penalty have nothing to do with how I vote as a judge, they have a lot to do with whether I can or should be a judge at all. 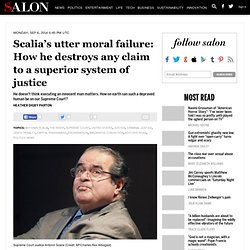 To put the point in the blunt terms employed by Justice Harold Blackmun towards the end of his career on the bench, when he announced that he would henceforth vote (as Justices William Brennan and Thurgood Marshall had previously done) to overturn all death sentences, when I sit on a Court that reviews and affirms capital convictions, I am part of “the machinery of death.”

My vote, when joined with at least four others, is, in most cases, the last step that permits an execution to proceed. I could not take part in that process if I believed what was being done to be immoral. – Justice Antonin Scalia.

How Black Do You Have To Be To Be Black Enough? Super Bowl champion Seattle Seahawks quarterback Russell Wilson was accused of not being Black enough and essentially called an ‘Uncle Tom,’ within the confines of his own locker room. 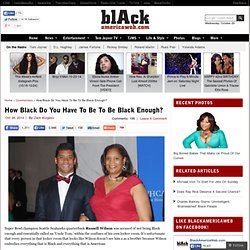 It’s unfortunate that every person in that locker room that looks like Wilson doesn’t see him a as a brother because Wilson embodies everything that is Black and everything that is American. He is the great-great grandson of a slave to a Confederate colonel, who was freed after the Civil War. Stop thanking me for my service. Last week, in a quiet indie bookstore on the north side of Chicago, I saw the latest issue of Rolling Stone resting on a chrome-colored plastic table a few feet from a barista brewing a vanilla latte. 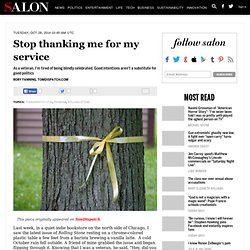 A cold October rain fell outside. A friend of mine grabbed the issue and began flipping through it. Knowing that I was a veteran, he said, “Hey, did you see this?” Students spring into opposition after Bill Maher announced as keynote speaker. In response to an announcement last week that comedian Bill Maher would speak at UC Berkeley’s fall commencement, an online petition started circulating Thursday that demanded that the campus rescind its invitation. 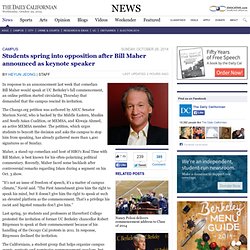 The Change.org petition was authored by ASUC Senator Marium Navid, who is backed by the Middle Eastern, Muslim and South Asian Coalition, or MEMSA, and Khwaja Ahmed, an active MEMSA member. The petition, which urges students to boycott the decision and asks the campus to stop him from speaking, has already gathered more than 1,400 signatures as of Sunday. Maher, a stand-up comedian and host of HBO’s Real Time with Bill Maher, is best known for his often-polarizing political commentary.

Recently, Maher faced some backlash after controversial remarks regarding Islam during a segment on his Oct. 3 show. Smog couture: Facemasks on catwalk at China’s fashion week. Published time: October 29, 2014 16:19 A model wearing a mask presents a creation at the QIAODAN Yin Peng Sports Wear Collection show during China Fashion Week in Beijing, October 28, 2014. 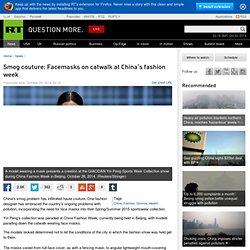 (Reuters/Stringer) China’s smog problem has infiltrated haute couture. One fashion designer has embraced the country’s ongoing problems with pollution, incorporating the need for face masks into their Spring/Summer 2015 sportswear collection. Putin’s Moscow is anxious, gilded and hollow. The last time I saw Maria Baronova on Nikolskaya Street in Moscow, she was taking part in a silent anti-government demonstration before being bundled into a police bus with a half dozen other protesters. 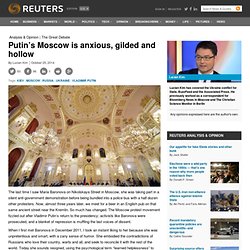 Now, almost three years later, we meet for a beer in an English pub on that same ancient street near the Kremlin. So much has changed. The Moscow protest movement fizzled out after Vladimir Putin’s return to the presidency; activists like Baronova were prosecuted, and a blanket of repression is muffling the last voices of dissent. Reuters Opinion sur Twitter : "The cracks below Moscow's foundation are too deep to ignore forever: