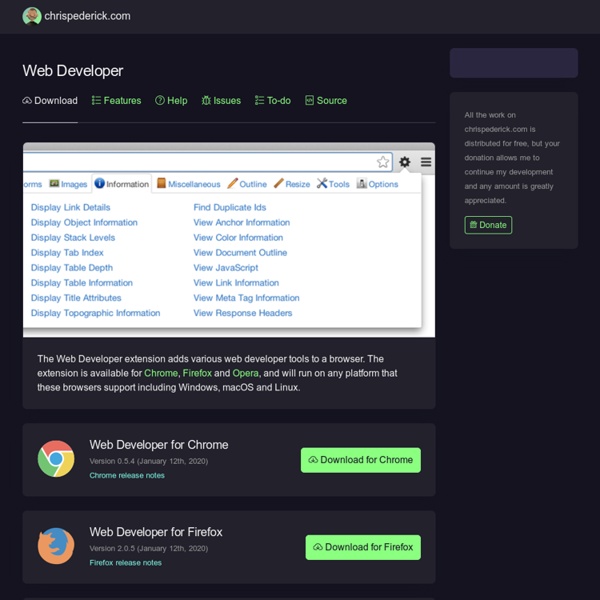 Keyboard Shortcuts for Windows - The solution Whether you are working with General Folder, Word, Excel, PowerPoint or Internet Explorer and Media Player, all the shortcuts are provided in this article. The use of a Windows operating system can be made easier and quicker with the use of keyboard shortcuts and combinations of various keys. This article explains the shortcuts used for different applications such as Microsoft Word, Excel and PowerPoint. Although many shortcuts are already well known, this article also provides an insight into those that are less commonly used. Needless to say, keyboard shortcuts reduce the time and effort of using the mouse while working. This article lists the most common shortcuts used in a Windows operating system.

Quickly & Easily Manipulate HTML5′s Canvas Element With jCanvas However, creating such interactive content is never as easy as pie, and that rule doesn’t exclude HTML5‘s main element that does all the work: canvas. If you’ve been following what the latest browsers have to offer, some of them may include a GPU-accelerated experience that makes the canvas element run a lot better. There are frameworks available that try to make the canvas element a little bit easier to develop for, notably jQuery. But even then, jQuery makes you type quite a bit.

Word 2007 Shortcuts for Inserting Accents and Symbols You can use shortcuts to insert accented characters and common symbols into your Word documents. For example, you can type deja vu or get fancy and type déjà vu or café or résumé. Diacritical symbols appear over certain letters in foreign languages and in foreign words borrowed into English. How To: Add Social Networking 'Share To' Links To Your Site It seems like everyone is now connected by some form of social network, people are sharing a colossal amount of data between each other over sites such as Twitter and FaceBook. With this potential reach, allowing users to easily share web pages they come across is a very beneficial idea. This blog runs on the WordPress CMS so adding social link sharing functionality can be done easily with various plugins. If you are not on a CMS with easily available plugins and want to share links, you can use traditional links to send your page details to the respective sites. Its very easy to do, here is how to do it for the popular social networks.

How Open Source Software Can Improve the Library - DegreeTutor.com Remember a time when doing research required us to have to go to the library? Your school had one, and that's probably where you spent most of your library time. If it wasn't your school, then it was probably your local town or city library. Some of these libraries may have been tiny little holes in the wall with just a few thousand books while others were huge university libraries with 10,000 of books, magazines, newspapers, cd, microfiche, and more. The depth a library can have can range greatly; it all depends on how much money that library gets in funding. The big college libraries obviously get the most due to the fact that they are part of an actual business model that produces a significant amount of money.

Add a Mobile Landing Page to Your Site Give mobile visitors a way to quickly access your company phone number, email, or just directions to the office. Why Have a Landing Page? Having a mobile specific layout allows on-the-go visitors to quickly access to telephone numbers, email addresses, and directions – exactly the sort of thing a visitor from a mobile device might be there for.

BurningIsoHowto Ubuntu is distributed over the Internet as DVD image (.iso) files. The GettingUbuntu page has links to the ISO image files, as well as other methods of getting Ubuntu. Before burning a DVD, it is highly recommended that you verify the md5 sum or sha256 sum (hash) of the .iso file. For instructions, please see HowToMD5SUM and HowToSHA256SUM. About XBMC is an award-winning free and open source (GPL) software media player and entertainment hub that can be installed on Linux, OSX, Windows, iOS, and Android, featuring a 10-foot user interface for use with televisions and remote controls. It allows users to play and view most videos, music, podcasts, and other digital media files from local and network storage media and the internet. Our forums and Wiki are bursting with knowledge and help for the new user right up to the application developer.

Ten Dying IT skills By Linda Leung There are some things in life, like good manners, which never go out of style, and there are other things, like clothing styles that fall in and out of fashion, but when an IT skill falls out of favor it rarely ever comes back. Here's our list of 10 dying IT skills. If any of these skills are your main expertise, perhaps it's time to retrain.

AutoIt v3 - Automate and Script Windows Tasks - For Free! AutoIt v3 is a freeware BASIC-like scripting language designed for automating the Windows GUI and general scripting. It uses a combination of simulated keystrokes, mouse movement and window/control manipulation in order to automate tasks in a way not possible or reliable with other languages (e.g. VBScript and SendKeys).