20 Examples Of Infographs That You Don’t See Every Day 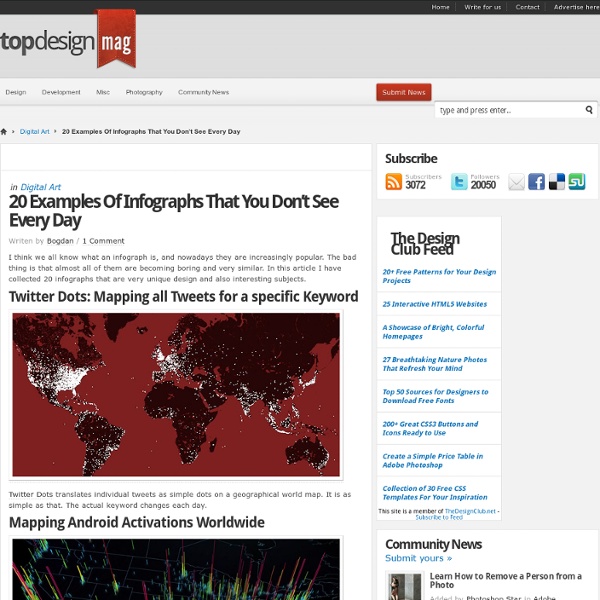 I think we all know what an infograph is, and nowadays they are increasingly popular. The bad thing is that almost all of them are becoming boring and very similar. In this article I have collected 20 infographs that are very unique design and also interesting subjects. Twitter Dots: Mapping all Tweets for a specific Keyword Twitter Dots translates individual tweets as simple dots on a geographical world map. It is as simple as that. Mapping Android Activations Worldwide In the war for the next smartphone platform, all weapons are allowed, including some good old mapping captured in a 1080p HD video. Visualizing the Airspace in Europe Transport visualization firm Ito World has taken flight routes drawings to the next level, in particular by adding a detailed level of information in terms of the exact travel altitudes of the tracked airplanes. Poverty Infographic A two poster series exploring the effect poverty has on education. 9 Years of Sleep A Physical Representation of News Ghost Counties Related:  Need to Organize

Do You Know The Real Cost Of Social Media? These days if you’re not using social media to build your brand then you’re way behind the times. But many companies are fooled into thinking that social media marketing is free, or at least close to free. A new infographic published on Focus.com uncovers some of the costs of using social media for marketing, from staff costs to external fees, advertising and more, and discusses whether the ROI makes social media spending worth the cost. The infographic begins with a simple statement. “With social media at the height of its popularity, advertisers and companies find it an easy and trendy means of expanding their marketing horizons. According to the infographic, running a social media campaign is far from free. Megan O’Neill is the resident web video enthusiast here at Social Times.

Cool Infographics - Blog Left Handed Facts 7 Stats 15% of people are left handed. I always thought this number was higher — and according to some of my left handed friends and family, also smarter? Well, according to this infographic, they are also more likely to become alcoholics — so I guess that’s a fair trade-off. If only 15% of people are left handed, think about the market that exists for left handed folks. Left-handed scissors, golf clubs, and potato knives. I’d be interested in finding out how much companies like, Taylor Made, allocate to left handed product development. Share This Infographic Get Free Infographics Delivered to your Inbox

10 Nuggets Of Wisdom Worth One Hundred Dollars To You This story is one of several being published to celebrate the $100 Change program and inspire you to take action. Before I launched $100 Change to the world, I asked those on the early announcement list some of the exact questions that I asked the change-makers to give answers to for the 100 daily prompts. This was one of my favourite questions and you – my community, gave some great and varied answers. When asked ‘what’s a nugget of wisdom that’s worth $100 to you?’ Don’t forget to share in the comments below the nuggets of wisdom that are worth $100 to you! 1. To be nobody but yourself, in a world that is doing its best night and day to make you everybody else, means to fight the hardest battle. - Greg Hartle, Founder of Ten Dollars and a Laptop 2. If you feel like crap while you’re working on whatever piece of the project, STOP. - Elena Harder, CEO & Founder of Evolving Humanity 3. - James Wightman, CEO & Founder of The Life Sketch 4. – Natasha Vorompiova, Founder of SystemsRock 5. 6. 7.

Tipping Etiquette Around the World Growing up I never really understood the tip, it always seemed as though we were just paying twice for someone to do their job. However as I’ve gotten older I’ve realized tipping is a pretty important thing. After all these people are handling your food and other important things you don’t want them messing with/up. Today’s infographic Tipping Etiquette Around the World does a nice job of comparing the way people tip in different countries. Being in the service industry is not all it’s cracked up to be, but the tips sure do help. Click to enlarge Share This Infographic Get Free Infographics Delivered to your Inbox 10 Awesome Free Tools To Make Infographics Advertisement Who can resist a colourful, thoughtful venn diagram anyway? In terms of blogging success, infographics are far more likely to be shared than your average blog post. This means more eyeballs on your important information, more people rallying for your cause, more backlinks and more visits to your blog. Designing An Infographic Some great tips for designing infographics: Keep it simple! Ideas for infographic formats include: Timelines;Flow charts;Annotated maps;Graphs;Venn diagrams;Size comparisons;Showing familiar objects or similar size or value. Here are some great tutorials on infographic creation: Creating Your Infographic Plan and research.If required, use free software to create simple graphs and visualisations of data.Use vector graphic software to bring these visualisations into the one graphic. Ultimately, if you have a little design skill, the very best approach is to create all the simple graphs and illustrations yourself using vector graphic software. Stat Planet Hohli

Women in Business I’m sure you’ve been filling out a RFP, or some mundane company information form, when you see the section that asks if your company is a Women-Owned Business. My company is not run by women, however, I work with several companies that have women owners and key stakeholders. There are some advantages to being a women-owned business, but according to this infographic, women still only hold 3% of c-level positions. This is changing though. This infographic shows some positive numbers around salaries and GMAT numbers. I have a feeling that women will continue to move towards men in salary, position, and authority. Click to enlarge Share This Infographic Get Free Infographics Delivered to your Inbox

The Anatomy Of An Infographic Information is very powerful but for the most bit it is bland and unimaginative. Infographics channel information in a visually pleasing, instantly understandable manner, making it not only powerful, but extremely beautiful. Once used predominantly to make maps more approachable, scientific charts less daunting and as key learning tools for children, inforgraphics have now permeated all aspects of the modern world. I designed a couple of infographics back in college, the need arising especially around the time Soccer World Cup fever spiked. Infographics can appear daunting to some with the sheer amount of data they present, but designed in the right manner and step by step, they can actually be one of the most fun things you will ever create. Today I am going to walk you through the anatomy of an infographic, its different levels and sub-levels and a 5-step process to ensure that your infographic is not only conceptually sound, but accurate and easily understood. Anatomy Of An Infographic

1,000 True Fans Diagramly – A Handy Tool For Creating Quick Flowcharts The best thing about Diagramly is how accessible it is. You just click a URL, and you’re in. There’s no download, no account registration, and you don’t even need Flash to use it. Pretty easy to understand, right? Let’s take a look at the UI: I included Chrome’s address bar on purpose, so you’d see it really is a Web app. Here are just a few samples I picked at random: Why there is a Shield of David there, I have absolutely no idea. Once you’re done crafting your masterpiece, you can save it in one of a number of formats: Saving as an SVG is very handy if you have a desktop vector editing application (such as the free and open-source Inkscape). Should you use Diagramly for your multi-million dollar keynote?

10 Gorgeous Social Media Infographics Infographics make information easy to consume. Mundane Charts vs Info graphics: Although they are essentially driven by the same set of information, our eyes are more attached to the ones that give aesthetic pleasure. Below are 10 that might suit your social media taste buds. 1. 2. 3. 4. 5. 6. 7. 8. 9. 10. Catch more at webdoctus. What Shapes Our Language? Our language is constantly being shaped by a number of different influences, from social media and pop culture to other languages and even human error. Thanks to the ever-evolving Internet, new words enter our language almost daily. But beyond new words, technology has had a big impact on the ways in which we communicate, particularly with respect to how many words it takes us to get our point across. View the infographic below to learn more. (Click Image To Enlarge) Use This Infographic In Your Class We think that infographics are an awesome learning and teaching tool, so our creations will always be available for you to print out, use with your students and embed on your blog! Embed this image on your site <a href=" src=" <a href=" Blog</a> Warm-Up Activity Writing Challenge

How To Create Outstanding Infographics In this tutorial you will learn that data doesn't have to be boring, it can be beautiful! Learn how to use various graph tools, illustration techniques and typography to make an accurate and inspiring infographic in Adobe Illustrator. Start by using the Rectangle Tool (M) to draw a shape. Give it a subtle radial gradient too. The entire design is based on a grid of four columns. Condense the shape so it fits within the left-most guide and centre guide. Move the shape over to the right and add another guide to the centre here. Using the Rectangle Tool (M) draw a thin white box on the centre line that will be the width of the gap between the columns. Repeat the process for the other columns with your final result being below. I like to place the most important graphics first and work-in the ancillary charts and graphs afterwards. Early on you can experiment with placing a main graphic that will help give the piece some visual interest. Give the circles a variety of gradients. That's it!