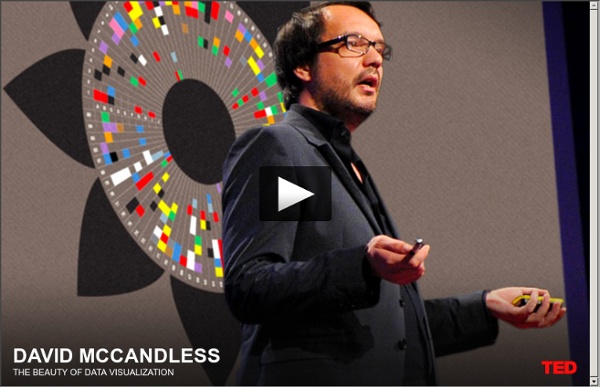 Research: Lev Manovich Coins the Term 'Media Visualization' New media theorist Lev Manovich just released a new text, titled What is Visualization? [manovich.net]. One might first wonder if such a question is not too... obvious, but in the light of the contentious discussion about the tension between artistic and scientific representations of data, and whether data art should be called visualization at all, it is always worth covering the basics. The text is quite substantial, so you might want to wait for some quiet time to dive into it. The main arguments in the text focus around distinguishing information visualization, scientific visualization and information design.

Videos Get Inspired – Best Inspirational Quotes J Krishnamurti on Choiceless Awareness and Thought Rob Beats Word Up [3/19/2014] The 20 best tools for data visualization It's often said that data is the new world currency, and the web is the exchange bureau through which it's traded. As consumers, we're positively swimming in data; it's everywhere from labels on food packaging design to World Health Organisation reports. As a result, for the designer it's becoming increasingly difficult to present data in a way that stands out from the mass of competing data streams. Get Adobe Creative Cloud One of the best ways to get your message across is to use a visualization to quickly draw attention to the key messages, and by presenting data visually it's also possible to uncover surprising patterns and observations that wouldn't be apparent from looking at stats alone. And nowadays, there's plenty of free graphic design software to help you do just that.

10 significant visualisation developments: July to December 2012 To mark the milestone of each mid-year and end of year I try to take a reflective glance over the previous 6 months period in the data visualisation field and compile some of the most significant developments. These are the main projects, events, new sites, trends, personalities and general observations that have struck me as being important to help further the development of this field. Earlier this year I published this collection for the first 6 months of 2012 and now I’d like to mark the end of 2012 with my latest perspective. I look forward to hearing from you with suggestions for the developments you believe have been most significant. And so, as ever, in no particular order…

Unfit for Work: The startling rise of disability in America | Planet Money By Chana Joffe-Walt In the past three decades, the number of Americans who are on disability has skyrocketed. The rise has come even as medical advances have allowed many more people to remain on the job, and new laws have banned workplace discrimination against the disabled. Every month, 14 million people now get a disability check from the government. The federal government spends more money each year on cash payments for disabled former workers than it spends on food stamps and welfare combined. Michael Deal ◊ Graphic Design Ongoing study of Beatles through infographics, much of which is based on secondary sources such as sales statistics, biographies, recording session notes, sheet music, and raw audio readings. This graphic traces songwriting contributions by different band members (data based on authorial attributions quantified by William J. Dowlding in the book Beatlesongs Longwinded notes: Color patterns offer clues about the band's gradual fracturing as each member became more independent. Red stalks (signifying jointly written songs) decrease in the second half of the timeline; the split-color bars give way to solid bars of a single color. George Harrison also began to compose more music as he matured as a songwriter, shown by the increase in green bars (Lennon and McCartney's lack of support through Harrison's development is often cited as a factor contributing to the band's eventual breakup).

15 Effective Tools for Visual Knowledge Management Since I started my quest a few years ago searching for the ultimate knowledge management tool, I’ve discovered a number of interesting applications that help people efficiently organize information. There certainly is no shortage of solutions for this problem domain. Many tools exist that offer the ability to discover, save, organize, search, and retrieve information. However, I’ve noticed a trend in recent years, and some newer applications are focusing more on the visual representation and relationship of knowledge. I believe this is in part due to the wider adoption of mind mapping (and concept mapping), and leveraging concepts and advances in the semantic web community. Most traditional personal knowledge management (PKM) or personal information management (PIM) applications offer the same basic set of features:

Making Data Work GE Works. Building, Moving, Powering and Curing the world. In the process, our technologies are generating data on a petabyte scale. This data contains valuable information that will drive insights, innovations, and discoveries, but it can be difficult to access and digest. Using data visualization, we’re pairing science and design to simplify the complexity and drive a deeper understanding of the context in which we operate. Check out our latest video.