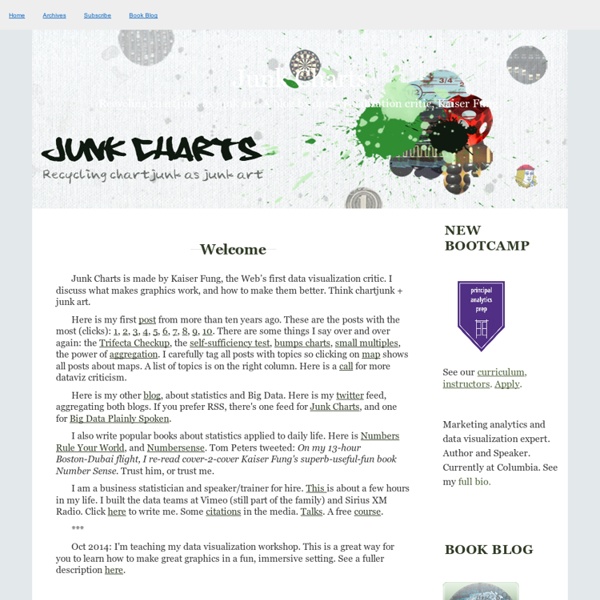 This post is part 2 of an appreciation of the chart project by Google Newslab, advised by Alberto Cairo, on the gender and racial diversity of the newsroom. Part 1 can be read here. In the previous discussion, I left out the following scatter bubble plot. This plot is available in two versions, one for gender and one for race. The key question being asked is whether the leadership in the newsroom is more or less diverse than the rest of the staff. The story appears to be a happy one: in many newsrooms, the leadership roughly reflects the staff in terms of gender distribution (even though both parts of the whole compare disfavorably to the gender ratio in the neighborhoods, as we saw in the previous post.) Unfortunately, there are a few execution problems with this scatter plot. First, take a look at the vertical axis labels on the right side. I find this decision confounding. The horizontal axis? Here is the same chart with improved axis labels: Re-labeling serves up a new issue. Related:  Data Visualizations

Best of the visualization web At the end of each month I pull together a collection of links to some of the most relevant, interesting or thought-provoking web content I've come across during the previous month. Here's the latest collection from January 2018. Visualisations & Infographics Includes static and interactive visualisation examples, infographics and galleries/collections of relevant imagery. SRF | 'Roger Federer: 20 Years, 20 Titles' Mapping Police Violence | '2017 Police Violence Report... collected data on over 1,100 killings by police in 2017.' SCMP | '2017: the safest skies record' SCMP | ... and here's a photo of the print version Economics | 'All the president’s tweets' Pixel Mixer | 'Anatomy of a Viz - The Level is in the Details' Mike Vizneros | 'A Chamber Divided: What We Can Learn By Using BioFabric Charts' Taylor Baldwin | 'Audiofabric' Guardian | 'Bussed out: How America moves its homeless' Twitter | 'A climate change cross stitch' Guardian | 'How the NHS winter beds crisis is hitting patient care'

Bloom Blog Visual Mapping.com 37 Data-ish Blogs You Should Know About You might not know it, but there are actually a ton of data and visualization blogs out there. I'm a bit of a feed addict subscribing to just about anything with a chart or a mention of statistics on it (and naturally have to do some feed-cleaning every now and then). In a follow up to my short list last year, here are the data-ish blogs, some old and some new, that continue to post interesting stuff. Data and Statistics By the Numbers - Column from The New York Times visual Op-ed columnist, Charles Blow, who also used to be NYT's graphics director.Data Mining - Matthew Hurst, scientist at Microsoft's MSN, also the co-creator of BlogPulse.Statistical Modeling - We might disagree on certain things, but Andrew's blog is one of the few active pure statistics blogs.The Numbers Guy - Data-minded reporting from Carl Bialik of the Wall Street Journal.Basketball Geek - Like statistical analysis and basketball? Statistical/Analytical Visualization Maps Design & Infographics Others Worth Noting

Well-formed data The Functional Art Prefuse: A Toolkit for Interactive Information Visualization Jeffrey Heer, Stuart K. Card, James A. Landay Although information visualization (infovis) technologies have proven indispensable tools for making sense of complex data, wide-spread deployment has yet to take hold, as successful infovis applications are often difficult to author and require domain-specific customization. The prefuse toolkit is open source software and can be downloaded from Prefuse: A Toolkit for Interactive Information Visualization

Gamestorming Information is Beautiful: You've Been Quango'ed visualisation | News Information is Beautiful on quangos Illustration: David McCandless for the Guardian We all know 'quango' is a dirty word. Like bad fruits, they're useless, extraneous, over-funded non-government bodies that need to be quoshed or squeezed. Right? There are over 1,000 such organisations in the UK. Problem is, I don't know what most quangos do. Frustrated by this, I set about researching these bodies and what they did. So here I've: • Visualised every quango that receives over £25m in direct funding from the government • Filtered out exclusively Welsh, Scottish and quangos from Northern Ireland (just to make it manageable) • Described the purpose or role of every quango in plain English (many quangos have arcane names and jargonistic self-descriptions) • Detailed the major quangos to be abolished or 'under review'. I was surprised that the National Gallery, BBC World Service and the Met Office are all quangos. UK Quangos Visualization - InformationIsBeautiful.net About the data About Me

Federal Plain Language Guidelines: Introduction Table of Contents and Guidelines The Plain Language Action and Information Network (PLAIN) is a community of federal employees dedicated to the idea that citizens deserve clear communications from government. We first developed this document in the mid-90s. We continue to revise it every few years to provide updated advice on clear communication. find what they need, understand what they find; and use what they find to meet their needs. We’ve divided the document into five major topics, although many of the subtopics fit within more than one topic. When we first wrote this document, we were primarily interested in regulations. Visual Business Intelligence We typically think of quantitative scales as linear, with equal quantities from one labeled value to the next. For example, a quantitative scale ranging from 0 to 1000 might be subdivided into equal intervals of 100 each. Linear scales seem natural to us. If we took a car trip of 1000 miles, we might imagine that distance as subdivided into ten 100 mile segments. It isn’t likely that we would imagine it subdivided into four logarithmic segments consisting of 1, 9, 90, and 900 mile intervals. Logarithms and their scales are quite useful in mathematics and at times in data analysis, but they are only useful for presenting data on those relatively rare cases when addressing an audience that consists of those who have been trained to think in logarithms. For my own analytical purposes, I use logarithmic scales primarily for a single task: to compare rates of change. I decided to write this blog piece when I ran across the following graph in Steven Pinker’s new book Enlightenment Now:

Visualize this: Is it information or is it art? By John Grimwade An old infographic chestnut. It’s always been a tricky balance between getting the story across, and making a great image. But thanks to some serious computing power, we’ve arrived at a crunch point. Big revelation: The biggest trend in infographics right now is data visualization. A worrying aside: My students keep bringing stunning examples they have found on the Internet. Yes, in many cases, you really do have to be a rocket scientist to know what’s going on. All of this is not a problem at all, until… wild visualizations start masquerading as infographics. All Streets by Ben Fry. Wheat and Wages chart by William Playfair, 1821. Regulation/Innovation by Jer Thorp. Let’s not lose sight of the end user in this. Don’t get me wrong, there are some great data visualizations around, and I applaud them. In my little world, I like infographics that have been carefully edited and ordered to tell a story clearly.