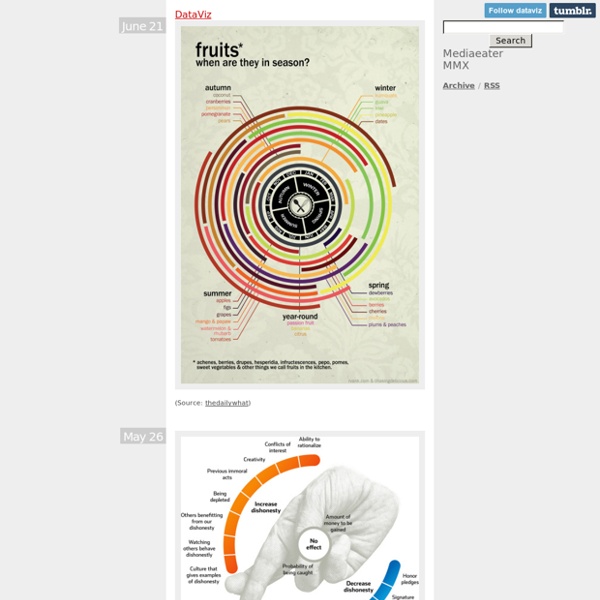 Research: Lev Manovich Coins the Term 'Media Visualization' New media theorist Lev Manovich just released a new text, titled What is Visualization? [manovich.net]. One might first wonder if such a question is not too... obvious, but in the light of the contentious discussion about the tension between artistic and scientific representations of data, and whether data art should be called visualization at all, it is always worth covering the basics.

Data Visualization: Modern Approaches - Smashing Magazine About The Author Vitaly Friedman loves beautiful content and doesn’t like to give in easily. When he is not writing or speaking at a conference, he’s most probably running … More about Vitaly Friedman … Data presentation can be beautiful, elegant and descriptive. There is a variety of conventional ways to visualize data - tables, histograms, pie charts and bar graphs are being used every day, in every project and on every possible occasion.

12 Valuable Wordle Tips You Must Read…Word Clouds in Education Series: Part 1 Welcome to a series of posts devoted to the use of Word Clouds. I know you will find new information… whether you are a seasoned user of word clouds, or brand new. I enjoy working with teachers and helping them use word clouds in their lessons because they are a great way to get any teacher started with integrating technology.

A Visual Introduction to Machine Learning Finding better boundaries Let's revisit the 73-m elevation boundary proposed previously to see how we can improve upon our intuition. Clearly, this requires a different perspective. Michael Deal ◊ Graphic Design Ongoing study of Beatles through infographics, much of which is based on secondary sources such as sales statistics, biographies, recording session notes, sheet music, and raw audio readings. This graphic traces songwriting contributions by different band members (data based on authorial attributions quantified by William J. Dowlding in the book Beatlesongs Longwinded notes: Color patterns offer clues about the band's gradual fracturing as each member became more independent.

15 Stunning Examples of Data Visualization Data Visualization is a method of presenting information in a graphical form. Good data visualization should appear as if it is a work of art. This intrigues the viewer and draws them in so that they can further investigate the data and info that the graphic represents. Datasets on Datavisualization Wikileaks US Embassy Cables 29 Nov 2010 Datasets Infographic, Politics Wikileaks began on Sunday November 28th publishing 251,287 leaked United States embassy cables, the largest set of confidential documents ever to be released into the public domain. Here's how media outlets strive to make the data more accessible than its original form. Infographic of the Day: Twitter Tracks the Entire Country's Mood Every tweet, no matter how trivial, reveals the writer's mood, through word choice--It can be as obvious as "happy" or as subtle as "diamond." Now imagine if you could take that knowledge, scale it up to the entire Twitter-verse, and use it to gauge the entire country's mood? That's exactly what Alan Mislove, a computer scientist, at Northeastern University, did, using 300 million tweets in real time. Check it out in action, over time--you can actually see moods rising at the end of the work day, and that same pattern gets repeated across time zones: Though it seems impossibly hard, the methodology was actually quite straightforward.

5 Best Data Visualization Projects of the Year – 2009 It was a huge year for data. There's no denying it. Data is about to explode. Applications sprung up left and right that help you understand your data - your Web traffic, your finances, and your life. There are now online marketplaces that sell data as files or via API. Data.gov launched to provide the public with usable, machine-readable data on a national scale.