Mountains Out of Molehills — Information is Beautiful 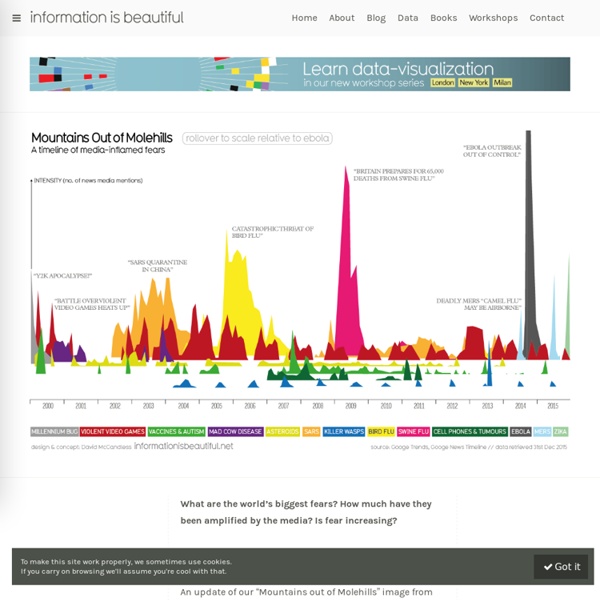 There's Big Money to Be Made in Asteroid Mining See the full version of the infographic. If humans were ever able to get their hands on just one asteroid, it would be a game-changer. That’s because the value of many asteroids are measured in the quintillions of dollars, which makes the market for Earth’s annual production of raw metals – about $660 billion per year – look paltry in comparison. The reality is that the Earth’s crust is saddled with uneconomic materials, while certain types of asteroids are almost pure metal. X-type asteroids, for example, are thought to be the remnants of large asteroids that were pulverized in collisions in which their dense, metallic cores got separated from the mantle. There is one such X-type asteroid near earth that is believed to hold more platinum than ever mined in human history. Near-Earth Mining Targets Both companies are looking specifically at near-Earth asteroids in the near-term, which are the easiest ones to get to. Where the Money is Made

Zenodo - Research. Shared. Plataforma de publicación y difusión de contenidos para Profesionales de la Información y la Comunicación — qipu Here's a Helpful Infographic on the Many Risks of Helicopter Parenting Below you'll find a nifty infographic produced by the folks at Yellowbrick detailing the consequences of everyone's favorite irritating childrearing trend: helicopter parenting. We've written a lot about this topic here at Big Think; our archives are a veritable smorgasbord of pieces detailing its effects and consequences. Our focus isn't merely because we like to helicopter the helicopter parents, but because shifts in how we raise our kids have resulted in a generation of young adults who lack critical thinking, self-reliance, and coping skills. And that sucks not just for said young adults, but also for everyone else who has to deal with their problems. The image below will shed some light on all these elements, as well as offer a more basic crash course for those still unfamiliar with this troubling trend: For additional information on and analysis of the items above, check out the Yellowbrick blog.

Growth Hacker Jobs - Silk About Bones You probably don’t give much thought to your skeleton, even though it’s holding you together. Do you have as many bones now as you did when you were born? What’s the shortest bone in your body? When it comes to bone health, Dr. By age 30, we’re already starting to lose bone density if we don’t exercise. Love This? Thanks for subscribing! “Most people don’t realize it when they’re deficient in vitamin D,” Stearns said in an interview with Care2. Check out The Cleveland Clinic infographic below to learn more about the bones that make up your skeleton. According to the National Osteoporosis Foundation, women 50 and younger and men 70 and younger need about 1,000mg of calcium a day. If you’re under age 50, you need 400 to 800 IU of vitamin D a day. Guidelines differ for children, pregnant women and women who are breastfeeding. If you don’t get enough calcium and vitamin D from your diet, talk to your doctor about dietary supplements. Main post photo: Thinkstock | Infographic: Cleveland Clinic

Trump's conflicts of interest: a visual guide | US news Trump's conflicts of interest: a visual guide By Nadja Popovich and Jan Diehm “I will be leaving my great business in total in order to fully focus on running the country in order to MAKE AMERICA GREAT AGAIN!” Donald Trump tweeted on Wednesday. The early morning announcement, which provided no further details but promised a press conference on 15 December, followed weeks of bad press over conflicts of interest posed by the Trump Organization’s international real estate dealings. “While I am not mandated to do this under the law,” Trump wrote, “I feel it is visually important, as president, to in no way have a conflict of interest with my various businesses.” So far, the visuals haven’t been good for the president-elect. Closer to home, the business interests of the Trump Organization will cross paths with the US government on multiple fronts, providing ample opportunity for further conflicts. General Services Administration v Trump International Hotel, DC What the President-elect could do