Trying to follow what is going on in Syria and why? This comic will get you there in 5 minutes. 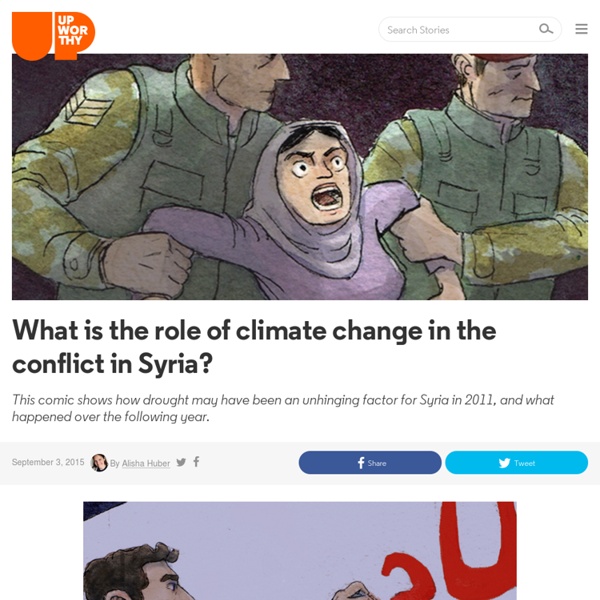 That warning has become a global alert. Since the uprising against Assad in March 2011, over 240,000 people have been killed, 4 million Syrians have fled their country, and over 7 million have been displaced. The headlines are full of the heartbreaking stories of these refugees — including young children — who have died trying to reach safety in other countries. The story of these refugees is deeply tied to the effects of climate change. "We are experiencing a surprising uptick in global insecurity ... partially due to our inability to manage climate stress." That's how Columbia University professor Marc Levy (who also does studies for the U.S. government) summed it up. What's happening in Syria and across Europe is part of a larger story that affects us all.

In 1 tweet, J.K. Rowling captured the media's hypocrisy in how it treats Syrian refugees. J.K. Rowling is heartsick over how the thousands of Middle Eastern refugees flooding into Europe are being treated. So when The Daily Express published an article about the major humanitarian crisis on the bottom of their front page, Rowling took them to task. Specifically, for the prominent placement of a different story about a dog looking for a home. Of course, Rowling wasn't suggesting that people shouldn't care about homeless dogs. Photo via dudwnhahaha.

10 moving photos of Europe's migrant crisis - BBC News The photographs of a three-year-old Syrian boy found dead on a beach in Turkey are among the most powerful to have emerged from Europe's migrant crisis. But many other moving pictures have been taken over the years, illustrating the dangers of the migrants' journey or the treatment they have received on arrival in Europe. Image copyright Juan Medina / Reuters 1. Map: The walls Europe is building to keep people out After the Berlin Wall fell in 1989, for a while it seemed like border fences and barriers were a thing of the past in Europe. Many on the continent hoped for a new era of integration and receptivity. It didn't happen. Instead, various pressures have led Europe to adopt wall-building projects that would make Donald Trump proud. Right now, in Hungary, for example, the government is rushing to complete a 109-mile-long barbed wire border fence along its southern frontier with Serbia – a project made bitterly ironic by Hungary's 1989 decision to cut its border fence with Austria and help break the Iron Curtain.

A Report Covers The Reasons That Millions Of Kids Die Or Suffer. But All The News Isn't Gloomy : Goats and Soda China is one of the countries where childhood mortality is dropping. Above, students practice martial arts. ChinaFotoPress via Getty Images hide caption POEM: REFUGEE BLUES BY WH AUDEN Say this city has ten million souls,Some are living in mansions, some are living in holes:Yet there's no place for us, my dear, yet there's no place for us. Once we had a country and we thought it fair,Look in the atlas and you'll find it there:We cannot go there now, my dear, we cannot go there now. In the village churchyard there grows an old yew,Every spring it blossoms anew:Old passports can't do that, my dear, old passports can't do that. The consul banged the table and said,"If you've got no passport you're officially dead":But we are still alive, my dear, but we are still alive. Went to a committee; they offered me a chair;Asked me politely to return next year:But where shall we go to-day, my dear, but where shall we go to-day? Came to a public meeting; the speaker got up and said;"If we let them in, they will steal our daily bread":He was talking of you and me, my dear, he was talking of you and me.

Refugees - Cinema - History - Information - Lesson plans - Novels - Statistics - Videos - Vocabulary As Many as 50 Migrants Found Dead in a Truck in Austria - Text + Audio - 27 August 2015 (learningenglish.voanews.com) Migrant crisis: Grim find of bodies in Austria lorry - Article + Photos + Video - 27 August 2015 "The bodies of between 20 and 50 migrants have been found in a lorry abandoned in a motorway lay-by near the Austrian border with Hungary, authorities say." (BBC) Senegal migrant town Tambacounda mourns its lost sons - 27 August 2015 "People in one of Senegal's poorest areas are in mourning after dozens of their loved ones lost their lives in shipwrecks off the Libyan coast as they tried to make the treacherous journey to Europe. The BBC's Laeila Adjovi visited them." (BBC) UK net migration hits record high - VIDEO - 27 August 2015 "Net migration to the UK is at an all-time high, reaching 330,000 in the year to March, the Office for National Statistics has said.

Zika Virus Expected to Spread Through the Americas The World Health Organization warned Monday of the spread of the mosquito-borne Zika virus through the Americas, as scientists rush to better understand the disease’s suspected links to a surge in fetal deformities in Brazil and governments issue travel warnings to pregnant women. Brazilian health officials believe Zika has caused a spike in the number of babies born with microcephaly, a condition in which a baby’s brain and head don’t develop to a healthy size, leading to brain damage. Nearly 4,000 cases of microcephaly have been tracked since the outbreak began—more than 30 times the number in a typical year, Reuters reported. The disease was first reported in Brazil in May 2015. Canada and Chile are the only two countries the virus isn’t expected to reach, because the Aedes mosquitoes—the main means of transmission—aren’t there yet, WHO officials said.

US soldiers 'killed Afghan civilians for sport and collected fingers as trophies' Twelve American soldiers face charges over a secret "kill team" that allegedly blew up and shot Afghan civilians at random and collected their fingers as trophies. Five of the soldiers are charged with murdering three Afghan men who were allegedly killed for sport in separate attacks this year. Seven others are accused of covering up the killings and assaulting a recruit who exposed the murders when he reported other abuses, including members of the unit smoking hashish stolen from civilians. In one of the most serious accusations of war crimes to emerge from the Afghan conflict, the killings are alleged to have been carried out by members of a Stryker infantry brigade based in Kandahar province in southern Afghanistan. According to investigators and legal documents, discussion of killing Afghan civilians began after the arrival of Staff Sergeant Calvin Gibbs at forward operating base Ramrod last November.